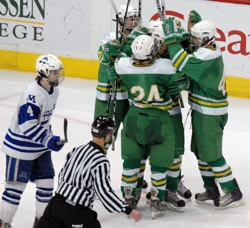 The Hornets beat Minnetonka 4-2 on Friday, March 13, in the Class AA championship game at the Xcel Energy Center in St. Paul with a nameless, faceless team of muckers and grinders their coach described playfully as mutts.

“Look at them,” Edina coach Curt Giles said with grin.

No, Giles isn’t afraid to needle his players about their relative lack of pedigrees. With Giles, a former Minnesota North Stars defenseman, all that ribbing merely translates into the highest of compliments.

His Hornets had, had after all, just knocked off the state’s No. 1 ranked team, a Skippers squad that features four Division I recruits, two of which were Mr. Hockey finalists, and had lost only once (to Edina) during the regular season.

“You have no idea how proud I am of these kids,” Giles said. “Nobody gave them credit for much all season.” 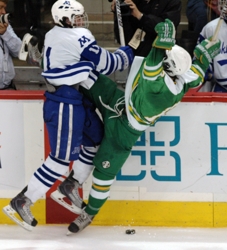 It was Edina’s record-tieing seventh championship, and probably the Hornets' most improbable given where they began the season (out of any discussions about potential big-school state champions) and how they finished a decidedly mediocre January stretch in which they went 2-4-2.

“It’s a pleasure to be on a team like this,” said Hornets junior Jake Sampson, who had a goal and an assist against the Skippers. “We didn’t have the skill, but we had the depth.”

Skill is a relative term when used in conjunction with a Hornets program that has made 32 state tournament appearances and produced wave after wave of Division I and NHL talent. Last season Edina entered the state tournament with the No. 1 seed and a handful of high-grade seniors who handled the bulk of the Hornets’ scoring, only to be ousted in the quarterfinals by unheralded Moorhead.

Using an altogether different formula, Edina got goals from four players and three lines to take a 4-0 lead after two periods. The Hornets then held off a relentless third-period Minnetonka rally to win the title game in front of an announced crowd of 17,833 and join Roseau and International Falls as the state's only other seven-time champions.

“I don’t know which one of these clowns scored goals tonight,” said a grinning Giles, seated next to Sampson and senior Ryan Cutshall during a postgame media session, “but there is probably two or three or four of them again tonight.” 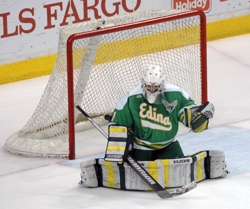 Cutshall and Sampson each had a goal and an assist, and linemate Steven Fogarty added two assists for the Hornets (22-6-2), the No. 2 seed in the tournament. Michael Sit and Brett Stolpestad also scored for the Hornets, who, true to form, got at least one point from eight players.

“(What) Edina has is they have depth, and they have speed and strength,” said Minnetonka coach Brian Urick, whose Skippers beat the Hornets in the first two of the teams’ four meetings this season. “They keep coming at you. That has a tendency to be a problem for us.”

Andrew Prochno scored twice for No. 1 seed Minnetonka (27-1-2). His goals came 42 seconds apart during the opening two minutes of the third period.

“I always dreamed of it, but you don’t know until you win it all,” Edina goaltender Connor Girard said about the Hornets’ improbable state title, their first since 1997. “Just like the rest of the team, I knew we had it in us.

“I think that was a real turning point for us, that Minnetonka game, and we never looked back from there.”

“That game” was Edina’s 5-4 overtime victory on Feb. 11. The Hornets trailed 4-0 after the first period before rallying to win. They started a run of 10 straight victories that carried Edina all the way to the state title.

“That gave us the confidence that we could beat the No. 1 team in the state,” Cutshall said.

Girard made 23 saves, including an eye-blurring catching glove snare of a Max Gardiner shot with about 5 minutes remaing. The play stayed in the Hornets' zone for all but a few minutes of the final period.

On Edina’s second goal, he was beat after a dump in by Edina freshman Lou Nanne took a strange carom of the end boards and then off the back of the goal, the puck eventually ending up in front of the net in the slot. 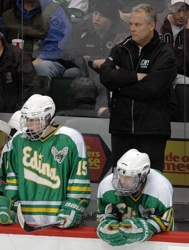 “He dumped it in hard off the wall there,” Kruger said about Nanne, the grandson of the former Minnesota North Stars general manager of the same name. “I was out challenging him, because they were kind of firing it off the dump in a lot on net. It took a weird bounce off the wall there. I just kind of misplayed it a little bit. Got a little nervous, tried to not knock it in myself.

“I feel kind of bad about that one. Bounces happen, there’s not a whole lot you can do.”

Michael Sit took advantage of the funky bounce by pounding the loose puck into the net to put Edina ahead 2-0 just 2:35 into the second, and Brett Stoplestad made 3-0 less than two minutes later.

Cutshall had opened the scoring for Edina just 26 seconds into the first period.

“Yeah, obviously we were eager,” Cutshall said. “We saw that they had to go into a couple of overtimes last night. So we kind of figured they would be tired. But we didn’t play any different than we would in a normal game.”

Urick declined to use the Skippers’ emotion-draining win over the Pioneers, a game that lasted 3 hours, 33 minutes and ended well after midnight, as a reason for his team’s slow start.

“I thought our guys were ready to play,” Urick said. “We weren’t going to use that as an excuse.”

Edina, as it has been for more than a month, was undoubtedly ready. It was all systems go for the first two periods. After that, it simply became a matter of protecting the lead and milking the clock.

Then, in the end, the mutts got what they deserved. A wild celebration that included a Gatorade-bucket shower for Giles. Payback for all those "insults."

"Yeah," he deadpanned when asked about the attempted drenching, "I'm real upset about that."

1. Ryan Cutshall, Edina
Senior forward scored the Hornets' first goal and added an assist on their final score that put them ahead 4-0, continuing to show the speed and chemistry that made his line that includes Jake Sampson and Steven Fogarty among the most dominating in not only the state tournament but the entire playoffs.

2. Connor Girard, Edina
Hornets' junior put an exclamation mark on a brilliant 23-save performance with a spectacular glove-hand save on Minnetonka senior and Mr. Hockey candidate Max Gardiner with 5 minutes, 58 seconds left in the third period.

3. Andrew Prochnow, Minnetonka
Senior defenseman scored two goals in a 42-second span early in the third period to allow the Skippers to climb back into the game and make for a tense finish to what otherwise might have turned into a blowout.