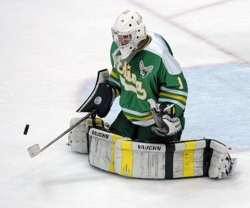 Solid, if not spectacular goaltending can mean all the difference between being a good and great team.

Edina’s road to the state Class AA championship may have taken its final turn on a late January night in Minnetonka, of all places.

Edina coach Curt Giles had been predominantly splitting the goaltending duties between senior John Ankeny and junior Connor Girard right up until the night the Hornets visited Pagel Arena.

Girard did not start that Jan. 23 evening but entered the game in the second period with his team trailing 6-1 and held the Skippers to one goal over the final 28 minutes.

Suddenly, the job was his.

Girard started six of the final eight regular season games and all six postseason games to backstop the Edina to its first state title since 1997. In those 12 games, Girard posted a remarkable 1.81 goals against average to complement a .914 save percentage.

The soft spoken Girard admitted he never imagined a scenario which would include him shutting down a team with the star power of Minnetonka to wrestle from the Skippers a championship many had conceded to them months ago.

“I always dreamed of it but you don’t know until you win it all,” said the shy goalie, his eyes shaded by the bill of a Pittsburgh Penguins baseball cap struggling to contain a full head of stringy, black hair.

“It’s like the rest of the team, we always knew we had it in us, but I think that was a real turning point for us, that Minnetonka game. We never looked back from there.”

Giles had been keeping a close eye on both of his goaltenders throughout the season’s first two months but, in the end, Girard’s play simply made it too difficult to keep him out of the lineup. 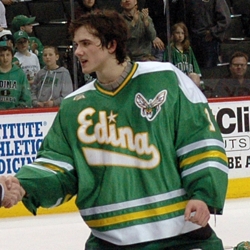 “We were coming down the stretch and we were playing both kids at the same time and just watching them work in practice, and Connor kept gaining confidence and gaining confidence,” Giles said. “We’ve dealt with enough goalies in our lifetime that if you’ve got a goaltender that’s got confidence, he’s working hard, and he competes; that’s where you’ve got to go.”

Giles made sure to acknowledge Ankeny’s contribution to the program but rightly — as it turned out — feels he made the right move for his team.

He did more than a great job in this tournament as he held three quality opponents to only five goals and, not surprisingly, was named to the All-Tournament team.

Things did get a bit dicey early into a third period, which began with the Hornets holding a 4-0 lead. Two Andrew Prochno goals 42 seconds apart less than two minutes into the period cut Edina’s lead in half, and now it was the Skippers who were buzzing.

Girard’s teammate, Ryan Cutshall, who opened the scoring for Edina just 26 seconds after the opening faceoff, initially had mixed feelings about the goalie change but was quickly converted.

“At first it was kind of weird because Johnny was our goalie all year last year,” said the senior forward who, like Girard, earned All-Tournament honors for his efforts. “We always knew Connor was good, but then he started playing and everyone was just kind of seeing what he could do and we were all just kind of like ‘Wow’.”