If the massive frame doesn’t get your attention, then the silky skating stride most certainly will.

And then comes the cherry on top of all that fudge and whipped cream: the shot.

Bjugstad has spent hundreds of hours perfecting a wrist shot that, once launched off the blade of his extra-long stick, becomes a black blur goaltenders have little chance of stopping.

One of several high schoolers invited to participate in the Minnesota Wild’s skills competition in late January, Bjugstad beat the pros by scoring six times during the rapid fire competition.

“And they were shooting against the same goalie,” Blaine co-head coach Dave Aus said. “So that told me something right there.”

Leveraging all of his skills into one last high school season, Bjugstad scored 35 goals and 34 assists in 30 games. He almost singlehandedly led Blaine to the state Class AA tournament, scoring two goals each of the Bengals’ tightly contested Section 5AA semifinal and final wins over Osseo and Maple Grove, respectively.

In those two games, Bjugstad played every other shift and created more and more scoring chances as the clock wound down.

“You get to this point in the year, it’s do or die,” Aus said about his reliance on Bjugstad’s scoring. “You’ve got to do whatever you can.

“The other thing is why wouldn’t I have him out there as much as I can? Because there are (150) other teams in the state that wish they had him.”

Bjugstad was held without a point in Blaine’s state tournament losses to Apple Valley and Roseau, but he still did enough to earn the Hockey Hub’s inaugural All-State Player of the Year Honors.

A junior who accelerated his studies so he could graduate this spring and play for Minnesota next season, Bjugstad also was named Mr. Hockey and is expected to be a first-round NHL draft pick in June. 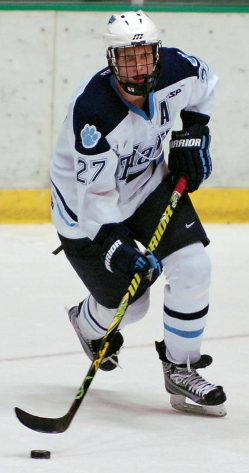