Freshman goaltenders? Forget about it.

Typically, there’s just not a lot of payoff in plugging a 14- or 15-year-old in the game’s most crucial position, then waiting for bigger, stronger, more mature players to exploit the kid’s every weakness.

Wise coaches know all too well that a young goaltender can get lit up like so much Vegas neon, the scars of the experience lingering like the smell of overripe equipment.

As such, less than a handful of the state’s 150-plus teams used freshmen as their primary goaltenders last season.

All of which makes the Zach Thompson Story as unexpected as it was amazing.

Not even Smalley would have imagined Thompson would become his workhorse in net or post the kind of numbers (2.32 goals-against average, .921 save percentage) goaltenders four years Thompson’s senior would drool over.

“He’s about as calm as you would ever want to see,” Smalley said about Thompson. “Nothing really frazzles him out there.”

An early-season injury to sophomore goaltender Christian Coffman allowed for Thompson’s trial-by-fire initiation to varsity hockey. It would turn out that opposing shooters were the players most likely to end up with bruised egos.

“He’s the real deal, that’s for sure,” Hermantown coach Bruce Plante said about Thompson, who almost served as a one-man roadblock to the Hawks’ trip to the state Class A tournament.

“That just shows that a hot goalie can make all the difference,” said Andover co-head coach Mark Manney, whose high-scoring Huskies managed only a 3-2 victory over Denfeld and Thompson early in the regular season.

“I didn’t really know what was going to happen,” Thompson said about his expectations heading into last season, which ended with the thrilling loss to Hermantown in front of a huge crowd in Cloquet. “It was a blast. The only thing that could have been better is if we could have made it to state.”

Thompson, who posted three straight shutouts in a late-December through early-January stretch of games, was so dominant that he not only tops the Hub’s list of 2009-10 freshmen, he also caught the attention of USA Hockey National Team Development Program coaches. Thompson was invited to attend the program’s evaluation camp that concluded on March 30. He declined.

“It took me a couple of days to figure out what I wanted to do,” said Thompson, whose twin brother, Alex, is a Denfeld forward. “I kind of realized I wanted to stick around and play with my buddies. There are a couple of them out in the driveway right now.”

Among Zach and Alex Thompson’s best friends is Levi Talarico, a freshman who scored a team-high 37 points for the Hunters last season. The return of the Thompsons and Talarico as well as an influx of players from a Duluth Central program that shut down after the season should make for a formidable Denfeld team that will move up to Class AA.

Zach Thompson said he plans to prepare for his sophomore season by making his usual appearance at the Roloson Mason goalie camp in Minneapolis in late June and playing “wherever I can, whenever I can.” 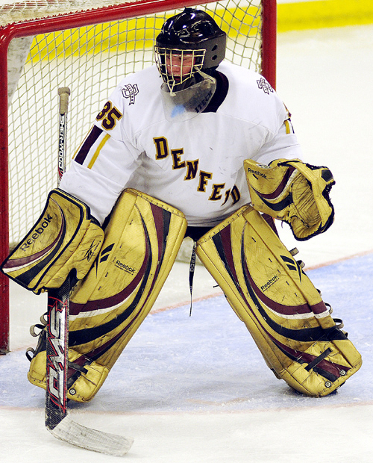 A look at the state's best sophomores, including a detailed look at where the top 30 stack up.