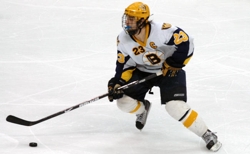 Breck’s Tyson Fulton, Minnesota's highest scoring senior who hadn’t committed to a Division I college, became the 28th state high school player to make a verbal committment on Wednesday, March 24, when he notified Union of his intention to play there.

Fulton scored 77 points (33 goals, 44 assists) in 25 regular season games to tie for third in the state in scoring, and he tacked on 16 more points in six playoff games as the Mustangs became the first state Class A team to repeat as champions.

UM-Duluth was among the other Division I programs that had shown interest in Fulton, whose brother Jordan is a senior wing with the Bulldogs.

Fulton also took an unofficial visit to Nebraska-Omaha after the sectional playoffs in March. Fulton said Union, located in Schenectady, N.Y., imposed a Wednesday deadline for him to accept their offer because of the school’s admissions schedule.

“It feels really good, the pressure is off now,” Fulton said about choosing Union. “They said I could come out there and play right away.”

Union went 21-12-6 overall and 12-6-4 in the ECAC last season. The Dutchmen, who have eight seniors on their roster, reached the finals of the ECAC postseason tournament, where they lost 3-0 to Cornell.

“He’s one of the best players in the state,” Breck coach Les Larson said. “I don’t know if you can say (he’s in  the top) dozen or a half dozen.

“The kid is a hockey player. He didn’t just arrive this year, he’s improved every year.”

According to Mustangs coach Les Larson, Russell had been receiving interest from Division I programs, but those schools (Boston College and Boston University among them) wanted Russell to play a year of junior hockey before going to college.