Sweet home for the Housleys 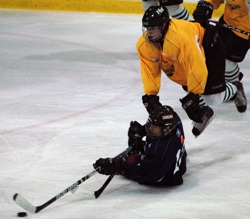 If Wilson Housley ever was to forget where South St. Paul’s Wakota Arena sits in regard to family importance, he need only to glance at the venerable building’s north wall to regain his bearings.

There, affixed to the concrete block, is a massive maroon jersey with the name “Housley” written on the back.

“It’s great playing here,” said the Stillwater senior, whose father, Phil, was a South St. Paul legend who made the rare jump from high school to the NHL in 1982. “It’s my dad’s home place. Obviously I’ve got to try to live up to his name.”

Playing alongside Hill-Murray stars Willie Faust and Jack Walsh, and for his dad, the Section 4 coach, Wilson Housley scored a highlight- reel goal in the first period to help power his “Gold” team past the Section 7 “Royal Blue” team 5-2 in the championship game of the Ted Brill Great 8 Festival on Sunday, March 28.

Faust, who scored an empty-net goal with one second left, finished with a goal and two assists. Tartan’s Mitch Rowe had a goal and an assist, and St. Thomas Academy’s Justin Crandall and Matomedi’s Charlie Adams also scored goals as Section 4 won the annual eight-team tournament created to showcase the state’s best seniors.

Housley’s goal might have been the prettiest of the bunch, as he cruised through the slot and ripped a shot that sailed over the catching glove of Section 7 goaltender Matt Ray of Andover.

“I took her wide and just gave it a nice flick over the glove,” Housley said about the goal that put his team ahead 2-0 and drew whoops of approval from his teammates on the bench. “I was jacked about it. I was excited.”

So too, no doubt, was Phil Housley, who amassed 1,232 points in 1,495 NHL games and still ranks as the second leading scorer among U.S.-born NHL players. He retired in 2003 and now coaches at Stillwater. On Sunday he served as one of the Section 4 coaches, returning to his home arena in the process.

“This is where you grew up,” Housley said. “This type of tournament is a great atmosphere for the kids to see how they measure to the rest of the seniors. So anytime I get the chance to come back here, it’s great.”

Winning, of course, makes the experience all the more fun. And although the championship celebration was decidedly low-key in comparison to the off-the-charts madness that occurs during the high school season, there was a massive silver trophy that required hoisting.

“I thought they were bringing the Stanley Cup out there; I was like ‘Nice!’ ” Wilson Housley said about the trophy, that was originally handed to the Section 4 goaltenders, Mahtomedi’s Brad Wohlers and St. Thomas Academy’s Kurt Altrichter.

“Goalies are supposed to have the best hands,” said Wohlers, who played the first period and a half and allowed one goal, about cradling the trophy first.

With Adams and his Mahtomedi teammate Brandon Zurn on one high-scoring line, Faust and Walsh on another and Hill-Murray’s Chris Casto and Jordan Johnson leading a punishing defense, the Section 4 team had plenty of instant chemistry. Throw in the fact that several of the players grew up as teammates playing youth hockey (Housley and Faust in Stillwater, Wohlers and Walsh in Mahtomedi, to name a few combinations) and the Gold team had the look of a winner from the start.

“At our first practice, I knew we had a good chance to win it,” Wohlers said. “I could see we had a great team.”

Section 4 won its three tournament games by a combined score of 19-7.

“You try to put together guys that are familiar with each other,” Phil Housley said about his coaching strategy. “In this type of format, it’s usually the best team, not the individuals, that wins it.”

Crookston’s Morgan Terpstra scored a power-play goal late in the second period for what proved to be the game-winner for Section 8 in its 4-3 triumph over Section 2 on Sunday, March 28, in the third-place game of the Ted Brill Great 8 Festival at Wakota Arena in South St. Paul.

Moorhead’s Logan Marks and Brainerd’s Reid Mimmack combined to make 29 saves. Mimmack was particularly busy in the final period, when Section 2 had three power plays, including one in the final minute when it pulled goaltender Tommy Burke of Holy Angels for an extra skater and a 6-on-4 advantage.