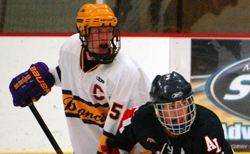 When Willie Corrin has the puck on his stick, he isn’t so much a defenseman as a Learjet with the go-ahead for takeoff.

With the rink serving as his runway, Corrin’s end-to-end rushes have propelled him not just to high school stardom in his hometown International Falls but made him a standout in the seemingly unending array of elite and all-star tournaments in which he has been invited.

All that flash and flair didn’t go unnoticed by college recruiters, as Corrin turned down scholarship offers from Northern Michigan and Nebraska-Omaha before verbally committing to play at Minnesota-Duluth.

Corrin made his decision on Saturday, March 27, while in the Twin Cities to participate in the Ted Brill Great 8 High School Festival. UMD assistant coach Brett Larson originally called Corrin with the offer and a recommendation to take some time to think it over.

The puck again squarely on his stick, Corrin knew immediately where he was headed.

“I walked into the St. Cloud State-Wisconsin (NCAA regional tournament game at the Xcel Energy Center), then called him back and said I wanted to be a Bulldog,” Corrin said.

The eventful weekend for Corrin continued with an appearance in Sunday’s championship game of the Great 8, an eight-team tournament created to showcase the state’s top seniors. Corrin, playing for Section 7, made a half-dozen or so of those signature jet-fueled rushes and scored a power-play goal on a blistering shot from the point in a 5-2 title-game loss to Section 4.

He finished the tournament with two goals and an assist, playing well enough to draw an inquiry from the Minnesota coaching staff. 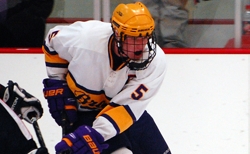 “With these different all-star games, you get a bunch of different kids who aren’t necessarily sure how they should be acting in the locker room,” said Forest Lake coach Aaron Forsythe, who guided the Section 7 team. “That wasn’t the case with Willie. He is a very intense competitor -- in practice, in the locker room, everywhere. In the games he took every shift seriously.”

The 6-foot-3, 180-pound Corrin is the nephew of Nebraska-Omaha coach and International Falls native Dean Blais. By turning down an offer to play for his uncle, Corrin will be with driving range of one of his biggest fans, his grandfather Bill Blais.

“He is very close to his family,” International Falls coach John Prettyman said. “And this is an opportunity to place close to home. Willie’s grandparents have always traveled to all the games, everywhere we go.”

Corrin scored 19 goals and had 49 points in 26 games for the Broncos this season as a follow up to his junior year, when he led the team in scoring with 21 goals and 42 points.

“He’s got great offensive skills as far as running the power play and breaking the puck out of our zone,” Prettyman said. “He’s been that way through our whole program, even back in pee wees and bantams. I don’t remember that ever happening, when we had a defenseman be our leading scorer.

“He’s actually refined his game a little bit. Now he’s much better at picking his spots and knowing when to go and how to go.”

Corrin said he expects to play at least one year in the USHL with the Fargo Force before enrolling at UMD. He plans to spend the summer living in Hermantown with Adam Krause, another UMD recruit, and working out with Bulldogs strength and conditioning coach Justin May.

“To get a scholarship from a school that I want to go to, it was a great feeling,” Corrin said. “I was smiling ear to ear.

“It feels great. It’s a weight off my back for sure. Obviously, I have to keep playing well. And obviously I have to prove that I belong there.”