Foes must deal with a triple shot of Poehlings

The Poehlings — Nick, Jack and Ryan — lead No. 1 Lakeville North 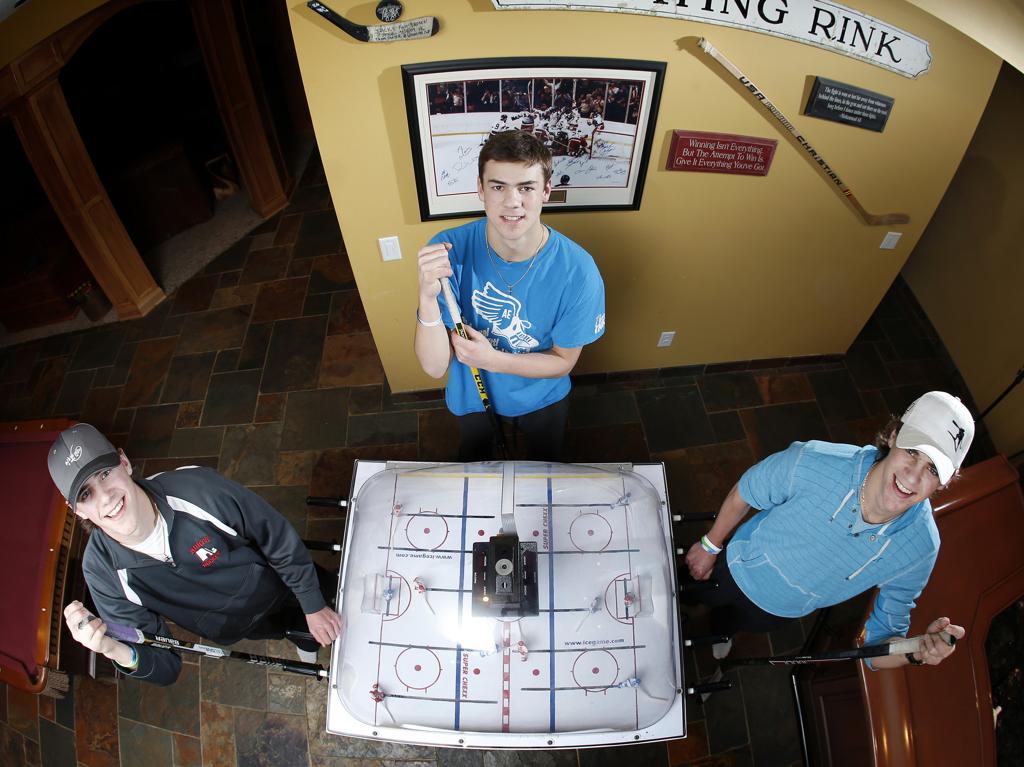 A driveway basketball hoop stands outside the Poehling home in Lakeville, offering no evidence of the hockey-centric family within.

Beneath the garage light is a clue — a hockey stick obscures part of the street address numbers. Inside the front door, four hockey sticks sit bunched together while skates waiting to be sharpened clutter a hallway bench.

The hardware belongs to the most recognizable forward line on the hottest boys’ hockey team in the state. The Poehling brothers — senior twins Nick and Jack on the wings and sophomore Ryan at center — have fueled Lakeville North’s 23-0 record and rise to No. 1 in the Class 2A rankings.

During the Panthers’ run to second place at the state tournament last March, the Poehlings combined for one of the goals and became what is believed to be the first brother trio to accomplish the feat in a tournament game in more than 50 years.

This season, the brothers have amassed 59 goals and 72 assists. Next week brings the section playoffs, the trio’s final chance to cement a championship legacy.

“We know people are talking about whether we will get the perfect season, but our goal is to win the state championship whether we’re 31-0 or not,” Jack said.

The brothers have all committed to St. Cloud State and represent half the Panthers’ six Division I-bound players, an amazing collection of talent for a program floating around .500 as recently as two seasons ago.

“Our coaches tell us, ‘You won’t get a team like this again, so you’ve got to enjoy it,’ ” Nick said. “[Coach Trent] Eigner is always reminding us that this is special and we have to make sure we come more ready to every game than usual, because every team is looking forward to us.”

As sophomores, varsity newcomers Nick — first into the world by eight minutes — and Jack helped the Panthers reach the state tournament with a 11-16-1 record. Eventual state champion Edina blasted the Panthers 9-3. Tim Poehling, the boys’ father and a state tournament memorabilia enthusiast, keeps the stick Nick used to score a hat trick in the game. It brings Nick little consolation, Tim said.

Then an eighth-grader, Ryan marveled at his brothers’ success and hoped to join them when he was sophomore. They were united a year ahead of schedule when coaches promoted Ryan to the first line as a freshman last season. The youngster got a different perspective of what it took to succeed.

“When I started playing with them, I realized it’s not just the skill,” Ryan said. “They put in a lot of hard work and I admired that.”

Eigner lauded Nick and Jack, who grew up playing defense, for their determination to play well in all phases of the game. Both recently were named Mr. Hockey Award finalists.

“If you ask our team what really drives our gears, it’s those two,” Eigner said. “I talk about Nick and Jack as one because they will always be the most intense guys on the ice.”

Said Nick: “For Jack and I to be at our best, we have to be working hard and winning battles in the corners. We find that fun and it helps us out a lot.”

The trio shares strong hockey abilities, run in similar social circles and include youngest brother Luke, 11, in everything. But in the words of their parents, Tim and Kris, they have their differences.

Nick is the responsible, get-things-done son who is caring and thoughtful yet plays with the most edge. Nick takes after Tim’s side.

Jack is the free spirit who likes making you laugh and relishes cabin life. He takes after Kris’s side.

Then there is Ryan, the cerebral, creative, eclectic son who processes his thoughts and has less to say. When silly fights break out between the twins over anything — from who takes the first morning shower to who gets the car — Ryan steps in to keep the peace.

Said Eigner, “For the better part of 24 hours every day, they’re on the same line.”

Play together, study together

This semester brought a new brotherly experience — all three are taking the same creative writing class. A recent assignment about the meaning of their names proved revealing. Jack, he told his family at the dinner table last week, means rebel while his middle name, Thomas, means twin. Nicklaus means victory while Ryan means little king.

“How fitting,” his mother joked.

Eigner said he sees each brother as “unique creatures” and relates to them in different ways. Jack possesses a “stoic personality and wry smile,” he said, while “Nick and I have far more of a conversational element to our relationship.”

Then there is Ryan. “I mean this is a completely complimentary way — Ryan has a rock-star persona to him,” Eigner said. “He’s very laid-back and does things on his own terms. He reminds me of a surfer. He knows what motivates him and it doesn’t matter what motivates anyone else. And he’s very unassuming in his talents.”

Ryan emerged this season, his brothers said, as a stronger and more competitive center, playing the body more often and winning more battles. His 33 points are good for fourth on the team.

Meanwhile, six of Nick’s team-best 24 goals came on hat tricks against Hill-Murray and two-time defending state champion Edina. And Jack, who played with a torn labrum most of his junior year, is back at full strength and leads the team with 29 assists.

A rare scoreless outing for the brothers at Prior Lake last week still featured what former Bloomington Jefferson coach Tom Saterdalen called “a Poehling move.” Jack kicked the puck toward Ryan near center ice, Nick joined in and the brothers turned a seemingly dull moment in the neutral zone into a potent rush. Saterdalen watched the game with the Poehlings’ uncle, Stan Palmer, his first Division I recruit.

While the Poehlings’ play draws praise, one well-intentioned opponent believes they can do more. After the Panthers defeated Duluth East in mid-January, Greyhounds coach Mike Randolph called the Poehlings over and told them, “You guys need to shoot the puck more,” Nick recalled. “It was good to hear that from him.”

The novelty of three brothers as linemates draws what Eigner called “an exorbitant amount of attention.” But it has not created dissent among a talented cast of teammates. Defenseman Jack McNeely committed to Nebraska-Omaha while defenseman Jack Sadek, a Mr. Hockey finalist, and goaltender Ryan Edquist are bound for the Gophers. Forward Max Johnson is drawing college hockey interest while defenseman Angelo Altavilla will play baseball at Nebraska.

“The rest of the team does a great job understanding the uniqueness of the situation,” Eigner said. “And the work that the brothers do every day in practice far outweighs anything that would distract their teammates.”

After last season’s runner-up finish to Edina, returning Panthers’ players chose “Unfinished Business” as their motto this season. The Poehlings are focused on delivering.

“We all want it to be championship or bust; we’d be disappointed if we didn’t win it,” Nick said. “But it’s important to stay humble and work hard and then everything will take care of itself. That’s the reason we got to where we are.”