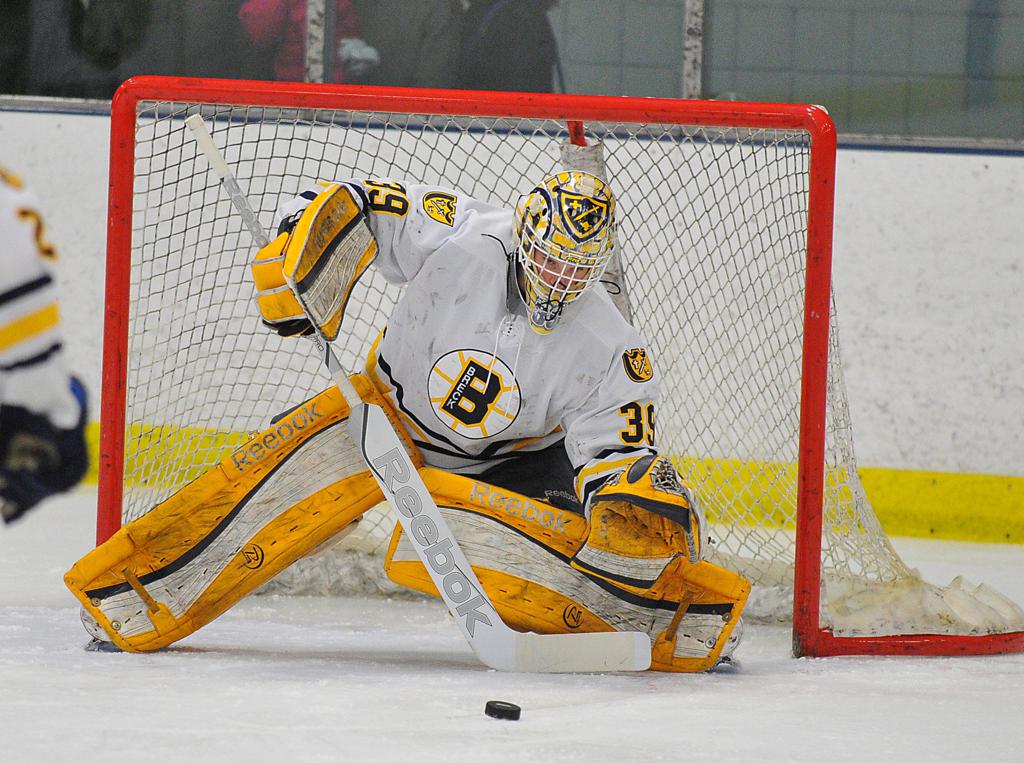 Headrick’s leadership and proficiency between the pipes, coupled with an outstanding defense, has the Mustangs boys’ hockey team back in the state tournament.

With no starts in a varsity game before this year, Headrick, a senior, played every minute of every regular-season game this season. He is one of two finalists for the Frank Brimsek Award, which goes to the top senior goalie in Minnesota. Headrick gave up only 33 goals in 25 regular-season games, while recording a 1.32 goals against average and .931 save percentage.

“He’s been everything,” Larson said. “Once he got the job, he just took it and never looked back. He hasn’t had one bad game.”

Headrick, who has played four years for Breck, said coming into the season he had a sense he was the frontrunner to win the starting spot, but knew he’d have to fight for it.

“I’ve tried to take advantage of my opportunity,” said Headrick, who also was the Breck football team’s placekicker this fall. “I felt like this was my year. I just have to be the guy everyone can count on. I worked as hard as I could and did everything I could to be prepared.”

“He’s stood on his head more than a few times for us,” said Lindstrom, a three-year starter and one of only three seniors on the Mustangs’ roster. “He’s exceeded everyone’s expectations, maybe even his own. It’s good to have a guy like that to lean on. We trust him.”

Headrick credits his success to his defensive unit. Historically, Breck has been known for putting pucks in the net. However, it’s the Mustangs’ defense that has stood out this season. Larson, who was a defenseman at Hill High School and at Notre Dame, said his philosophy is defense comes first. Seeing his team shutout opponents this season has brought a smile to his face.

Breck returned four of its six blueliners from last year — Lindstrom, junior Justin Paulson and sophomores Dalton Weigel and Brandon Leitz. The Strom brothers, Josh and Nick, are new to the lineup. Larson said the unit is as good as any he has coached.

“We have six solid ‘D’ that can play with anyone out there,” Lindstrom said. “We have confidence in whoever is out there. We all play aggressive and aren’t hesitant. All of us can handle ourselves very well.”

With his senior year on the horizon, Headrick said he stepped up his training with Breck’s strength and conditioning program and with his goalie coach, Josh Tucker, whom he has worked with since second grade. Headrick also did vision training through Tucker’s Edina-based Envision Sports, which trains reaction, hand-eye coordination, peripheral vision and focus.

“I just try to take every opportunity that I can,” Headrick said. “I know I won’t make a career out of it, but I’m just looking to work hard and play as long as I can.”

Headrick, one of five children in his family, is a quadruplet. He said he comes from a hockey family and plans to try out for Division III Hobart College in upstate New York next year.

“Hockey has definitely been a major part of my life,” Headrick said. “I just always had the dream of playing in the state tournament for the Breck Mustangs.”

This week he will get his chance. Headrick and the Mustangs are 21-7 and the No. 4 seed in the Class 1A state tournament. Breck has 10 Class 1A state appearances and four championships. Its 22 tournament victories are second to Warroad, with 27 victories.

Looking at the state tournament and state championship banners hanging in Breck’s Anderson Ice Arena, Headrick said everything is coming to fruition now.

“I’ve been dreaming of this a long time,’’ he said. “Now that we’re finally here it hasn’t really hit me. It’s been an interesting, wild season. I’m glad I’ve been a part of it.”