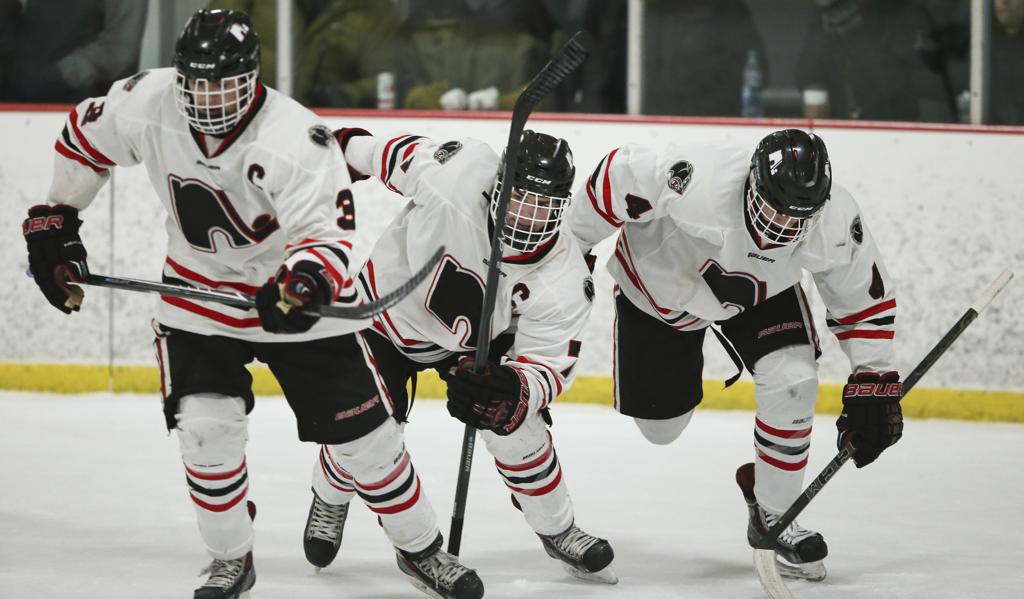 Lakeville North's Nick Poehling, center, skated back to the bench after he scored on Duluth East in the second period Tuesday night in Lakeville. Poehling's brothers and line mates, Jack, left, and Ryan earned assists on the goal. (Jeff Wheeler, Star Trib

The Class 2A state tournament begins Thursday with top-ranked Lakeville North (28-0) striving toward the first perfect season for a large-class program since Bloomington Jefferson in 1993. In the other bracket, No. 2 Edina (24-1-2) seeks a third consecutive large-class state championship that would equal the Jaguars’ run from 1992-94.

The Panthers and Hornets have been above the rest all season. Edina, which crushed the Panthers 8-2 in the title game last March, suffered its lone loss this season at Lakeville North.

Both coaches were quick to point out their team first must earn two victories against a strong tournament field. Edina faces Bemidji in the 11 a.m. quarterfinal at Xcel Energy Center. The Panthers face off against Hill-Murray at 6 p.m.

“People are thinking these are good teams and would like to see the game happen but, honestly, I haven’t thought about it,” Giles said. “You look too far down the road and you end up in the ditch.”

Said Eigner: “If we get this colossal matchup, so be it. But as a coach, there is zero benefit to thinking two games away.”

Plenty of folks are happy to speculate on their behalf. Not since Edina East (23-0) and Bemidji (19-1-3) in 1974 have two schools in the large- or one-class tournament with one combined loss met in the title game.

“It would be 30-0 against the team going for three in a row,” said Tom Saterdalen, coach of the Bloomington Jefferson dynasty. “Everybody wants to see it.”

A state championship for either team means Jefferson must make room at the top. Not a problem, Saterdalen said.

“If that happens for either team, hats off to them,” Saterdalen said. “It would be outstanding. More power to them.”

Coaches and a scout familiar with both teams agree the Panthers and Hornets possess the requisite power of a state-champ hopeful. Both teams have skilled and fast forward lines, led by three Division I-bound players, said Burnsville’s Janne Kivihalme and Wayzata’s Pat O’Leary.

For Lakeville North, the top line of brothers Nick, Jack and Ryan Poehling draws the most attention. The trio, all committed to St. Cloud State, has teamed up for 81 goals and 98 assists.

Kivihalme called the Poehlings “probably the best line in the state.”

No slouches in its own right, Edina’s top line features Mr. Hockey finalist Dylan Malmquist and Garrett Wait, who has committed to the Gophers. Both have tallied 71 points.

Right wing Parker Mismash, a talented, tenacious player who gets in opponents’ heads, has 19 goals.

“Their top-six forwards are phenomenal,” O’Leary said. “They are intense around the opposing net and can score in bunches.”

Beyond hockey sense and scoring prowess, both teams possess an aura different from their contemporaries.

“Edina has that swagger,” O’Leary said. “They get off the bus feeling like they’re up 2-0.

“Lakeville North is more calm and confident. They are a machine that keeps plugging away.”