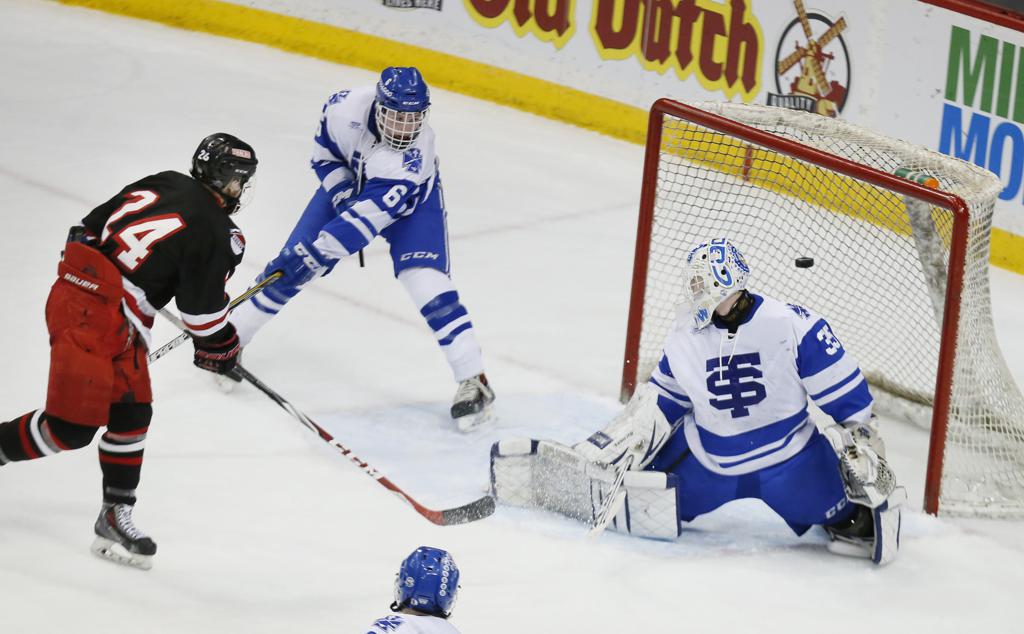 Ryan Peterson had just scored the biggest goal of his life and, as luck would have it, his momentum carried him smack into the glass in front of the Duluth East student section. Arms raised, a screaming Peterson surveyed the kids-gone-wild sea of red as teammates piled in from behind to form an impromptu celebratory mosh pit.

The unseeded Greyhounds had just stunned third-seeded St. Thomas Academy, rallying from a three-goal, third-period deficit for a 6-5 overtime victory Thursday in the Class 2A boys’ hockey quarterfinals at Xcel Energy Center.

“It was great,” a surprisingly subdued Peterson said about being at the epicenter of the postgame mayhem. “We are used to it, though.”

Yes, what might be improbable for most teams is standard procedure for the Duluth East. Peterson and the Greyhounds have been through all of this before.

The victory in overtime over a heavily favored opponent was Duluth East’s second comeback upset in as many games. The Greyhounds rallied from a three-goal deficit to defeat top-seeded Elk River 5-4 in two overtimes in the Class 2A, Section 7 final.

“We have been down a lot, in a lot of games,” Greyhounds senior forward Brian Bunten said.

Duluth East had one of its worst regular seasons in recent memory, flirting with the possibility of posting a losing record (unheard of for one of the state’s most storied programs) before finishing 11-10-4. Six of the Greyhounds’ past nine games have gone to overtime, and they lost only one of those.

Duluth East coach Mike Randolph was asked if he was “some kind of magician” during Thursday’s postgame media session. His response wasn’t to whip a rabbit out of a hat or tug an ace out of his sleeve.

Instead, he merely pointed to senior captains Bunten and Nick Altmann seated to his right.

“Those two guys right there, they drive the bus,” said Randolph, who in his 27th season earned his 546th career victory Thursday to move past former Bloomington Jefferson coach Tom Saterdalen into seventh place on the state’s all-time list. “And everybody has jumped on. They work their tail off every day in practice, in every game. And they have led the way.”

Size of the deficits Duluth East has rallied from to win its last two games, both ending in overtime.

Years since Bemidji had last appeared in the state tournament.

The Duluth East junior forward scored the overtime winner against St. Thomas Academy on a nifty deflection. He also scored in the third period to spark Duluth East’s rally from a three-goal deficit.

The Lakeville North senior and Mr. Hockey finalist scored twice, both on second-period backhand shots, to propel the Panthers past Hill-Murray.

The Edina senior forward scored twice, including the winning goal, in the Hornets’ victory over Bemidji.

Attendance: Thursday’s announced Class 2A quarterfinal afternoon attendance of 15,005, and the evening session drew an announced 14,993. Both figures were at least 20-year lows, according to Minnesota State High School League records.