Hermantown’s legacy is complicated, isn’t it?

Losing in the past five Class 1A state title games made the Hawks high school hockey’s version of the Buffalo Bills and then some. No one does that. Eveleth went to five consecutive championship games from 1948-52 and won four. International Falls did the same from 1962-66.

And Hermantown is back, having earned a rematch with East Grand Forks in Saturday’s title game. Whether the Hawks find redemption for a 7-3 loss last season or continued suffering remains to be seen.

The losing streak overshadows the fact that coming into the tournament, Hermantown is the last team in either class able to boast an undefeated season. The Hawks went 29-0-1 en route to winning the 2007 championship.

Returning to the championship game:
Plante: “It’s great. When you set your season up, you want to be in this game. Every team in Minnesota has that same aspiration.”
Koepke: “It feels great. It’s going to be a good time to try and get some redemption from last year. We know what East Grand Forks is capable of and we’re just going to come out and play our game the best we can. I think we have more guys this year with the experience of being in the state tournament. We are going to have a better mindset this year knowing what we have to do.”

What Plante will tell players:
“I just try to get them to play our game. And if our game is good enough, we will win. If not, then we won’t. If can get the boys to play without nerves or fear, we’ll do the best we can. We’ve played great in the championship games. Everybody knows it’s been five in a row but in four of those games we played really well – maybe some of the best hockey all year. And we didn’t win. What can you do with that?”

Preparing for a physical East Grand Forks team:
Plante: “We played them earlier in the year so we know how they play. They play mean and nasty and tough and aggressive. They’ll be throwing bodies all over the rink.

On being ready for a “man’s game” as Green Wave coach Tyler Palmiscno called it:
Plante: “We’re going to have to. If don’t man-up, it won’t work out. We have to be able to take the hits, make plans and stick it to them a little bit back. It’s going to be one of those games and hopefully we’ll have the moxie for it.”
Pionk: “I love it. I love those physical games. We’ve got a lot energy guys on our team: Sam Gibson, Jesse Jacques, Kyle Amundson – those guys, they love it once the bodies start flying. They jump in there and play their role. I can’t wait for tomorrow.”

Can the heart and soul take another defeat:
Plante: I don’t know. Last year I was probably crying all the way home. We can take it. When you look back on it, it’s such a compliment to our team. And what are the odds to be in that game six years in a row? You’d think you’d get beat a few times ahead of time or you’d win one or two. It’s almost laughable if it didn’t hurt so much. I’d probably take it every year if that’s the way it’s going to be because you’re still in the championship game and you had some fun along the way and you’ve won some big games. We’re proud to make it to the finals. It’s wonderful to be able to get there.”

On whether there is pressure to win
Pionk: “Not really pressure. We’re just going to go out there – it’s a brand new year. What happened in the past is the past. We’re going to come out and have open minds and look for a way to win this one.”

The Hermantown MVP of the game trophy – a Minnie Mouse bike helmet – appeared in the postgame press conference. A picture of “Pretty Boy” Jesse Jacques is below.
Pionk said: “I can’t remember who got it the first game but the person that gets it gets to pick whoever he thinks has the best game. Ryan [Kero] and I had it after the Spring Lake Park game so we decided to give it to Jesse for starting us off, getting us on the board there. 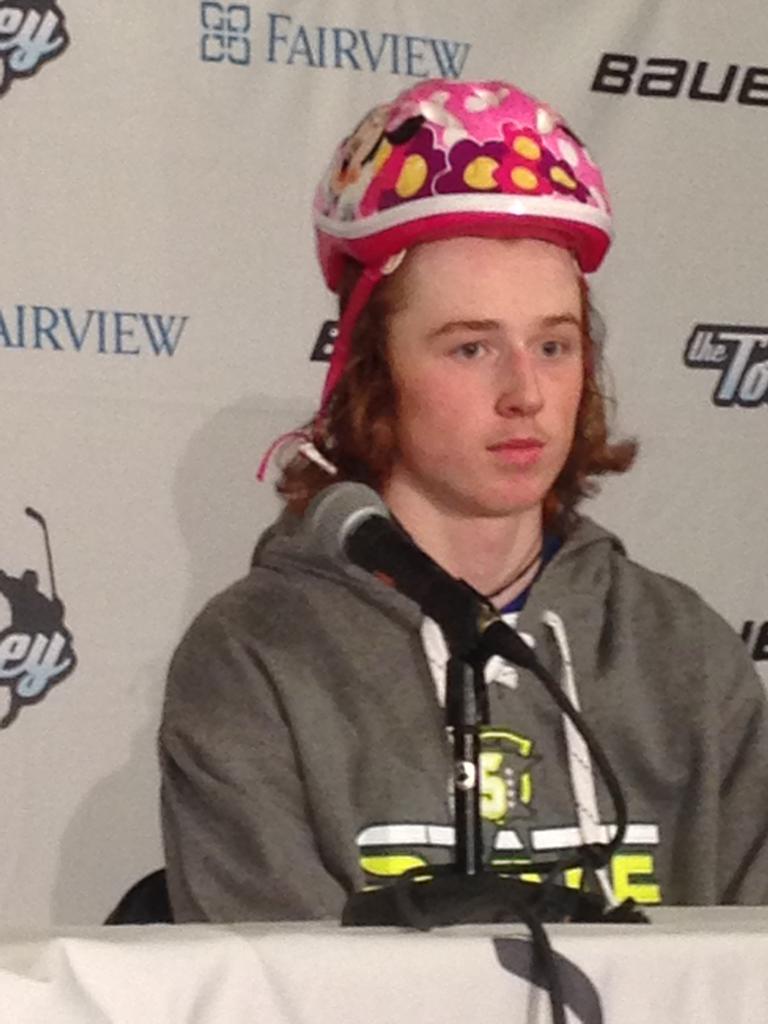