Best is yet to come for senior showcase?

Inaugural Minnesota NIT could expand to include more states 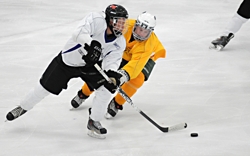 Of course, it helps that MacMillan’s team, Minnesota’s U-18s Selects, had just defeated Minnesota’s Seniors 5-3 on Saturday, April 24, at Plymouth Ice Center in one of the five-team tournament’s marquee games.

“We’re excited because there’s been really good parity,” said MacMillan, who was heavily involved in getting the tournament up-and-running as a replacement to the now-defunct Chicago Showcase and as an alternative to the new Pittsburgh Showcase, which was held the week before the Minnesota NIT. “Every game is decided by a goal or two. That’s exactly what we wanted when we put this thing together. I think we got the right teams to start, exactly for that reason.”

Designed to showcase seniors who have yet to make a college or junior hockey commitment, the old Chicago Showcase drew all-star teams of seniors representing more than 20 states, including Midwest powerhouses such as Minnesota, Wisconsin, Michigan and North Dakota.

When the event folded after last year, and its replacement emerged as the Pittsburgh Showcase, those same top Midwest teams decided to cut travel costs by joining forces in the Minnesota NIT. MacMillan said the goal is to expand the tournament with states such as Massachusetts that routinely produce top-level all-star teams.

There could even be a permanent home for a Minnesota U-18 team, based on Saturday’s game against Minnesota’s Seniors. Zach Dick of Grand Rapids scored what proved to be the winner 7 minutes, 33 seconds into third period in a back-and-forth that game ended with an empty-net goal by Tim Bonner of Osseo.

The loss knocked dropped Minnesota’s Senior team to 2-1 and left the event with no unbeaten teams.