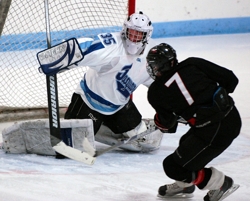 It's the offseason, but there's been precious little down time for Kyle Rau.

Eden Prairie's scoring phenom and previously the state's most coveted uncommitted Division I recruit has been training five days a week for a season that is still six months away.

Those workouts, and life in general, might come just a fraction easier now that Rau has decided where he will play in college.

"I knew it was time," said Rau, who on Sunday night committed to play at the University of Minnesota. "I was ready to get the weight off my shoulders."

As a junior last season Rau tied for third in the state in scoring with 77 points and is on the short list of favorites to win Minnesota's 2011 Mr. Hockey award.

Rau toured the Minnesota campus three weeks ago during an unofficial visit and said he felt good about the direction of the program. Rau played with several fellow Gophers recruits -- Blaine's Nick Bjugstad, Mahtomedi's Ben Marshall and St. Thomas Academy's Christian Isackson -- last summer in an international tournament in Slovokia.

"We had season tickets growing up, so I've always wanted to play for them," Rau said.

Rau said playing close to home wasn't a major factor in his decision, but that the opportunity to play right out of high school was. The Gophers have told him he won't be expected to play a year of junior hockey before enrolling.

After making his decision, Rau spent Monday informing recruiters where he was headed.

Denver and North Dakota were the other top choices for the 5-foot-8, 158-pound center who scored 38 goals and had 39 assists last season and, as a sophomore, helped lead the Eagles to the state Class AA championship.

Former Eden Prairie star Nick Leddy, a defenseman who was named Mr. Hockey in 2009, was a freshman who saw significant playing time with the Gophers last season.

“I’ve coached a lot of great players, and Kyle is obviously right at the top of the list with Leddy as far as his impact on the game every time he is on the ice,” Smith said.

Rau’s twin brother, Curt, is an Eagles defenseman. Both Raus will serve as co-captains for Eden Prairie next season, and both plan to play in the Upper Midwest High School Elite League this fall. Curt, who is also a standout lacrosse player, hasn't made a college commitment.

The Raus are two of 10 regulars on the Eagles' state championship team who will be returning for their senior season. Eden Prairie lost to eventual state runner-up Minnetonka in the Section 6AA title game last season.

"I can’t wait," Rau said about making a run at another state title.

Eden Prairie will be part of a revamped Lake Conference lineup that will include defending state champion Edina, Minnetonka and Wayzata. The Eagles' non-conference schedule includes state powers such as Duluth East, Hill-Murray and Holy Angels.

The Rau twins' older brother, Chad, signed a two-year deal with the Minnesota Wild on Monday, April 17. Chad played at Colorado College and was a seventh-round draft pick by the Toronto Maple Leafs in 2007.

He signed a free-agent contract with the Houston Aeros, the Wild's AHL affiliate, last season and was fourth in the league in scoring.

Kyle Rau said he talked often with Chad during the recruiting process, soliciting advice and gathering info on the WCHA's top programs.

"It wasn't easy," Rau said about choosing a college. "In the end, it was a problem I was happy to have to deal with."