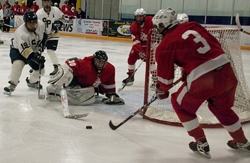 At a time when inner city hockey hardly can be described as thriving, when youth hockey associations in St. Paul and Minneapolis are merging more often than major airlines, when Minneapolis’ seven public high schools – with a combined enrollment of more than 7,000 – are fielding a single team, St. Paul Highland Park is a the very definition of a trend buster.

An idea hatched more than three years ago by Highland Central Hockey Association president Pat Anderson officially will come to fruition on Dec. 1 when St. Paul Highland Park plays its first varsity hockey game as an independent team since 1987.

"I don't think any of us took (starting hockey again at Highland Park) as that big of a deal, but our old coach kept calling us pioneers," said John Anderson, Pat Anderson's son and a junior who has spent the past two seasons playing on Highland Park's junior varsity. "He said that 10 years from now, we'll be in a bar somewhere when Highland Park is playing Edina in the state tournament and we can say, 'We started that.' "

While Highland Park has a long, long way to go to reach that dream matchup with Edina, the possiblity now at least exists.

“(Anderson) approached me about it when he found out I was an assistant principal at the high school,” said Pat Auran, who played hockey for Highland Park in the early 1980s. “I said the first thing we have to do is go to our principal.”

Thanks to a chance conversation with a hockey player in her Mac Groveland neighborhood, Nancy Katzmarek, the Highland Park principal at the time, was wholeheartedly in favor of reinstating varsity hockey at the school.

“The story she tells is that there was a kid who lived behind her in the neighborhood, but he didn’t go to Highland Park, so she asked him what school he went to,” said Auran, who now is the assistant principal at Highland Park junior high. “He said he went to Richfield.

“When she asked him why, he said because Highland Park didn’t have a hockey team.”

With Anderson providing numbers from a youth hockey association that has multiple teams at every age level and is holding steady if not growing in terms of players – an anomaly when it comes to most inner city youth programs in Minneapolis and St. Paul – and Auran offering his support, Katzmarek, eager to attract more students to her school, gave the green light to restore the high school’s program.

Highland Park has fielded a junior varsity team for the last two seasons in preparation for this season’s jump to the varsity level. The Scots debut on Dec. 1 with an 8 p.m. game against the St. Paul Saints at Highland Arena.

"I think we’ll get pretty good crowds," John Anderson said. "We filled the stands when we played (at Highland Arena) last year. They aren’t very big, but we did fill them. As a varsity team, we should get even more support."

“It is going to be a real challenge, it is going to be hard,” said Brandon Ferraro, who coached the Highland Park junior varsity the last two seasons, about the move to the varsity level. “The new coach knows that.”

Because of family commitments, Ferraro agreed to coach the Highland Park junior varsity for two seasons then hand off control of the program.

Thanks in part to an endorsement from Ferraro, Tom Doyle, who played at Como Park and Augsburg College, was hired for the job. Doyle, 25, was the Minneapolis East junior varsity coach last season (Highland Park beat East in both of the teams’ meetings) and is intimately familiar with the challenges of running an inner city hockey program.

“I come for a similar background, and I know city hockey,” Doyle said about Ferraro, who was a standout at Cretin-Derham Hall. “(Ferraro) had been talking to me about coaching the team for a couple of years.”

“It’s pretty cool to be a part of bringing hockey back to Highland Park,” said Doyle, a substitute physical education teacher in the St. Paul district. “City hockey has been on the downward slope for a while, you see that in both cities. St. Paul Johnson and Como Park have combined their youth programs for a couple of years now.

“But Highland Central, that area of hockey has been pretty strong.”