Bison search for consistency after 0-2 start 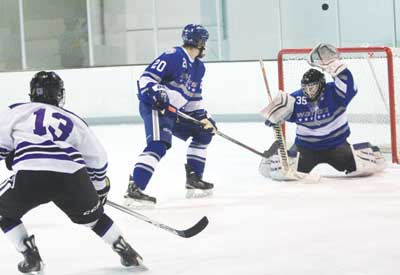 Nick Mueller (13) lifts a shot past the reach of goalie Brady Mick. (Photo by Rob LaPlante)

After falling behind 3-0 in the opening 13 minutes of the first period of Saturday’s 7-4 home loss Nov. 28 to section rival Brainerd, Bison head coach Aaron Johnson used his lone timeout to send a message.

“The message was similar to what it was after last Saturday,” said Johnson, referring to a 4-1 home loss Nov. 21 to Osseo. The Bison fell behind 3-0 after two periods in that game before finding their game in the final 17 minutes. “We played two periods of hockey that game that didn’t have any edge to it. It didn’t have any attitude to it. We were just out there.”

Senior forward Josh Howieson got things rolling at the 6:29 mark to give Brainerd an early 1-0 lead. Senior Eric Stout made it 2-0 two minutes later and sophomore Matt Fischer scored at 13:04 on a shot that was fired below the goal line.

Twice in the second period, the Warriors nearly extended their lead to 4-0. The first came on a disallowed goal when the net was off the pegs prior to crossing the line. The second came on a two-on-one where the Warriors missed an open net. On the same play, Buffalo junior forward Luke Ramsey sparked a furious rally scoring on a rebound of his own breakaway.

“I thought that was the turning point for them,” said Brainerd head coach Dave Aus. “That period they outworked us and put us on our heels. Give them credit.”

Junior forward Blake Habisch would cut the lead to 3-2 when he took a feed from junior Tom Rooney and made a move past a defenseman and deked the goalie to make it 3-2. It appeared Habisch had scored a shift earlier but an early whistle disallowed the goal.

The Bison completed the comeback when senior captain Kevin Kemp knocked home a rebound off a shot from senior Brady Hartman, tying the score 3-3.

“Coach really got on us after that first period,” Kemp said. “We came out really hard in the second period. That period showed what type of team we are. We’re a good team and we work hard. But now we have to do that for 51 minutes.”

“I think Kevin has been a great leader with his work ethic in practice and with the way that he’s been playing,” Johnson said. “He’s been hungry on pucks, getting in on the forecheck, and he’s been hard to knock off pucks.”

With both teams exchanging dominating periods, the final period started promising for the home team. Kemp’s dump in was retrieved at the side of the net by junior Cade Stensby, who sent a bad-angle shot, similar to Brainerd’s third goal, that beat Mick short side.

Stensby’s goal gave the Bison their first lead of the season. But similar to last year’s Section 8AA home playoff loss in which the Bison grabbed a 1-0 lead, but surrendered four straight goals in a 5-2 defeat to Brainerd, the Warriors pulled off a similar trick scoring four times in the third period, the final tally resulting in a hat-trick by Howieson, who scored his third goal of the game into the empty net.

“Brainerd is a good team,” Johnson said. “My message at the end of the day with our group was telling them this is a team that will be right there in Section 8AA, and we are not far behind, either. We have quality kids who are good hockey players. We need to get everyone on board and play a full 51 minutes. If we can do that, I think we’ll be a tough hockey team.”

The schedule doesn’t get any easier in the coming weeks. The Bison’s next three games all come against Wright County neighboring schools, starting with a 3 p.m. home game Saturday, Dec. 5 against MAML Moose. The first road test of the season comes Tuesday, Dec. 8 with a 7 p.m. showdown at No. 7 ranked Delano (Class A). They return home for a 7 p.m. home game Thursday, Dec. 10 against defending Mississippi 8 champions St. Michael-Albertville.

“We need to have a short memory and come back from these losses,” Kemp said. “Being 0-2 is nothing to worry about right now. We have a couple tough games coming up, but if we can win against STMA, I think it’s really going to jumpstart our season.”