In order to win the Silver Division of this year’s annual Schwan Cup, the road for most teams would likely go through top seed and No. 1 rated (Class A) Breck Mustangs.

As the No. 8 seed, the Buffalo boys’ hockey team opened day one of the three-day tournament held Dec. 28-30 at the Schwan Super Rink in Blaine suffering a 7-1 loss against Breck.

The Mustangs (9-1-0 overall) came into the tournament having defeated St. Michael-Albertville 9-1 on Tuesday, Dec. 22 in their previous outing.

Even with Breck’s high credentials, Bison senior captain Michael Sawdey said his team came into the tournament not intimidated.

“Coming in, we obviously wanted to win the tournament and we thought we could beat Breck,” Sawdey said. “We were not intimidated by them. You play to your opponent’s skill level. Breck is a great team and maybe you play with a little more defensive mind set, but for the most part, we try and play our game.”

Senior captains Brady Hartman, Kevin Kemp and Gavin Welch started the game with an impressive opening shift for the Bison. Although they only mustered one first-period shot, the opening period remained scoreless until the 10:34 mark when Breck center Carter Breitenfeldt finally beat Bison senior goalie Ben Zitur with a shot from the side of the net.

Sophomore Justin Paschke made it 3-0 for Breck on a crazy bounce off the glass off a dump in by teammate Grant Parrish. The puck caromed off the end glass into the crease area right to Paschke, who fired home a shot past a stunned Zitur.

“I thought we had a good start, but when you play a team like that, you can’t have things like that happen against you,” said Bison head coach Aaron Johnson. “We need all the bounces and luck that we can get. That goal definitely hurt us.”

Zitur kept the game within reach through one period as the shots favored the Mustangs 16-1. Zitur continued his strong play stopping all 11 shots he faced in period two.

“Ben’s been great for us all year,” Johnson said. “He’s given us a chance to hang in there. If it wasn’t for the late penalties, I think we walk out of here with a 4-1 game. We got a little undisciplined late and they kind of ran up the score on us.”

“We’re one of the least penalized teams,” Johnson said. “It’s just uncharacteristic of us to take unnecessary penalties like that.”

Buffalo’s lone goal came on a power play of its own. Junior defenseman Jon Pearson’s shot from the point was tipped in front of the net by Sawdey. The goal cut Breck’s lead to 4-1. It was Sawdey’s first goal of the season and second career tally.

“It was a good effort by all the guys on the power play,” Sawdey said. “Jon had a really good shot and it hit off the top of my stick. I got lucky, but it feels good to finally score.”

The Bison were defeated 5-4 by Lakeville South in the consolation bracket semifinal game Tuesday, Dec. 29 in Blaine.

The Bison played Mounds View in the seventh-place game at 3 p.m. on Wednesday, Dec. 30. Mahtomedi and Rosemount played for the Silver Division championship. Breck and St.Michael-Albertville squared off in the third-place  game, and Eastview and Lakeville South played for fifth place. Results of these games were not available due to Tuesday deadlines (see next week for final recap). 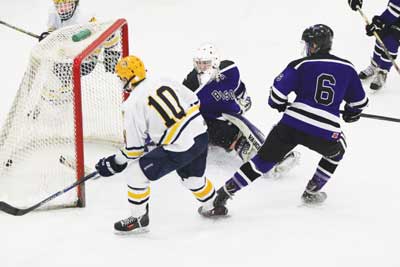 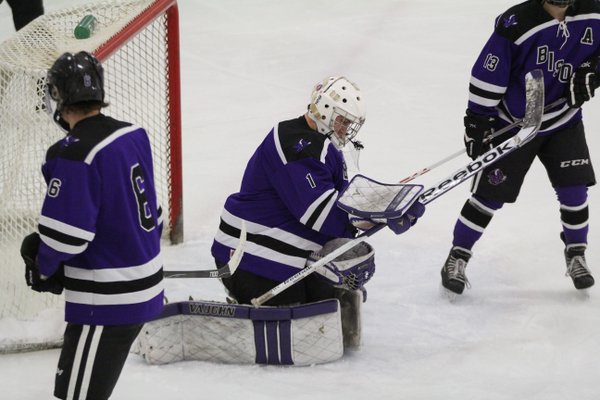 Bison goalie Ben Zitur made one of his 33 saves against No. 1 rated Breck Mustangs.