Lorne Grosso is retiring after the season as the winningest coach in state history. 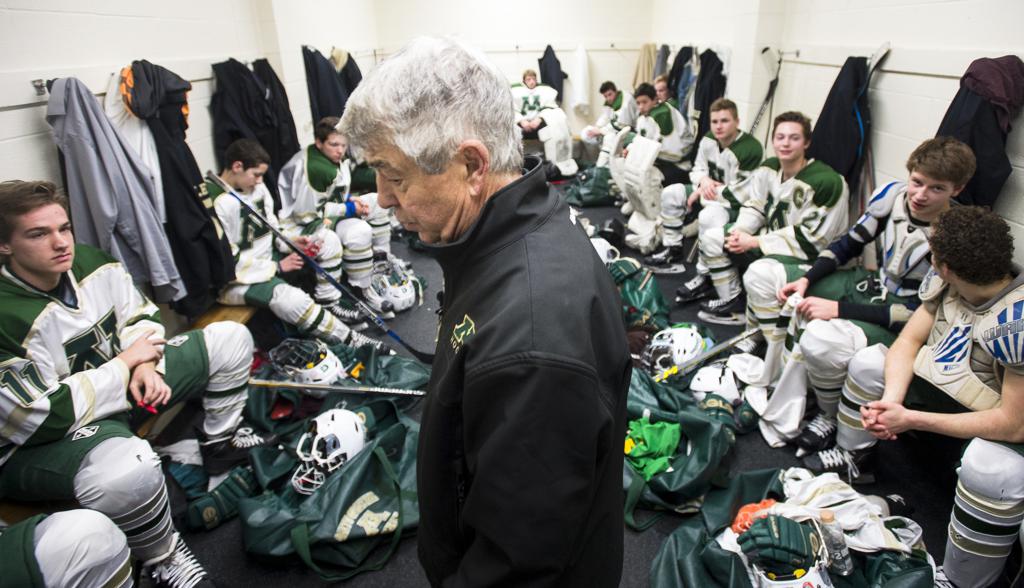 ROCHESTER, Minn. — Bass and beats thump through the locker room door, nothing like the 1950s doo-wop preferred by Lorne Grosso, the 73-year-old boys’ hockey coach at Rochester Mayo.

Grosso, the winningest coach in Minnesota hockey history, waited outside in the Graham Arena hallway before a recent game. He joked with assistant coaches about getting a 33 on his ACT. The punchline: He scored an 11 all three times.

They laugh as the team — the 49th under Grosso’s leadership — heads for the ice. He started the program when the school opened in 1966 and coached all but the year he and his wife, Joni, took a sabbatical in Italy.

Grosso, an eclectic and enduring figure in Rochester hockey, is retiring when this season ends before realizing his ultimate fear — coaching a former player’s grandson. He is half-joking.

Longevity is a source of pride for Grosso. He and Joni, married 51 years, have lived in their “starter” home 48 years. He taught Latin at Mayo for 41 years. And nearly a half century behind the bench has brought 702 career victories.

State tournament success, however, never came. The Spartans went 3-14 in seven appearances. Southern Minnesota still fights for the respect afforded Iron Range or metro-area suburban teams. That and Grosso’s “I’m proud to be humble” attitude make him shockingly easy to overlook despite his perch in the coaching record book.

“He cares not only about the game of hockey but about kids,” Nystrom said. “He’s old school. There are lessons to be learned when you play this game. It’s not all about winning and losing.”

Coaching and teaching are Grosso’s passions but far from his only interests. After high school he spent six months in the Catholic novitiate, studying to become a priest. His living room bookshelf houses Vince Flynn novels. In his basement, racks hold dozens of bottles of homemade wine. He cannot read music but he plays piano and guitar, usually while singing. He and Joni have three grown children, seven grandchildren and a sixth great-grandchild on the way.

With retirement looming, Grosso said, “Sometimes I think I could teach and coach forever. I will miss it. I enjoy the look on kids’ faces when they learn something.”

Grosso, who was 24 when he started coaching at Mayo, considered leaving Rochester just once, when the Gophers sought a head coach in 1972. Grosso did not apply for the position, which ultimately went to Herb Brooks.

Five years later, Rochester wrote itself into state tournament lore. Not Mayo but crosstown rival John Marshall, which won the 1977 state title. The Rockets remain the lone program south of the metro area to win a one-class or big-school title.

The Spartans’ 1979-80 team, a close, mentally-tough group, won 21 of its first 23 games and seemed poised for state tournament glory. Instead, a 5-2 loss to Bloomington Jefferson in the Section 1 championship game still haunts Grosso.

“That’s the one time he got down,” Joni said.

Mayo, with Grosso coaching his son, Jim, and future Olympian Jim Johannson, made its state tournament debut in 1982. Six additional trips came from 1992 to 2000, including the 1995 team captained by his nephew, Tony.

More appearances were possible, Grosso said. One obstacle he cited was the Rochester youth hockey association model. For years, players throughout the growing city were chosen for a single top-level Peewee or Bantam team. Grosso preferred multiple top-level teams, each one developing players for a specific high school. Being unable to change the approach was his “greatest frustration.’’

“He never had a true feeder program like most other high schools in the state,” said Jeff Whitney, Rochester Mayo activities director and a former Spartans’ hockey player and co-head coach.

State tournament appearances dried up in the new millennium but the victories kept coming. Grosso keeps two commemorative pucks in his house: One for tying former Edina coach Willard Ikola’s record of 616 career victories, the other for victory 617. Both came in the 2010-11 season.

Grosso became the charter member of the 700 victory club on Dec. 29 with a 12-3 victory over Dodge County. He likely won’t be alone for long.

Grosso and Nystrom occupy opposing benches for the final time Thursday. On a previous farewell tour stop, Grosso received some Italian cuisine from a Hibbing bakery. The Kiwanis Club of Rochester recognized his 700th victory with a framed accolade.

As for Nystrom’s contribution, he laughed and said, “I hope I present him a loss.”

Wins and losses never defined Grosso. Grateful former players write him letters. A former Latin student recently reached out. Whitney and two other players from the 1979-80 team showed up unannounced three years ago in Florida when Grosso received the American Hockey Coaches Association’s John Mariucci Award. Former player Chuck Buske asked the Grossos to be godparents of his son, Brandon, who later skated for Grosso.

Lorne Grosso at a glance: 49 years at Rochester Mayo

“He’s easily one of the most likable people you’ll ever come across,” said Lou Nanne, Grosso’s cousin. They grew up together in Sault Ste. Marie, Ontario. Nanne helped get Grosso a scholarship to Minnesota and later mentioned Rochester was opening a new high school.

“He always seems to be in a good mood and he’s been like that since he was a little kid,” Nanne said.

Former NHL player Shjon Podein, who graduated from John Marshall but later coached with Grosso in the summer, estimated his mentor “never worked a day in his life.” Teaching young people gave Grosso as much as he provided.

“Teenagers — you could start a fleet of cars with the energy they have,” Grosso said. “You want to teach them the game and values. We work hard to get them to play beyond their abilities and to have some fun. That’s what it’s all about.”

The philosophy has remained unchanged from 1966.

“He coaches us to be good players but also to be gentlemen,” senior co-captain Nick Norby said. “He knows the right time to say things and he’s not demeaning in any way.”

Grosso also has decided that next winter is the right time for him and Joni to start spending some months in the Florida sun. She overcame cancer. He overcame heart bypass surgery. They desire years together without hockey calling him away on so many dark and cold winter nights.

“He’s weathered a lot of storms in his career, and the reason he did is because of who he is,” Whitney said. “You do not last this long without a real genuine approach to life.”