Duluth Marshall dreams big, opts up to Class 2A

The private school is in its first season in Class 2A. 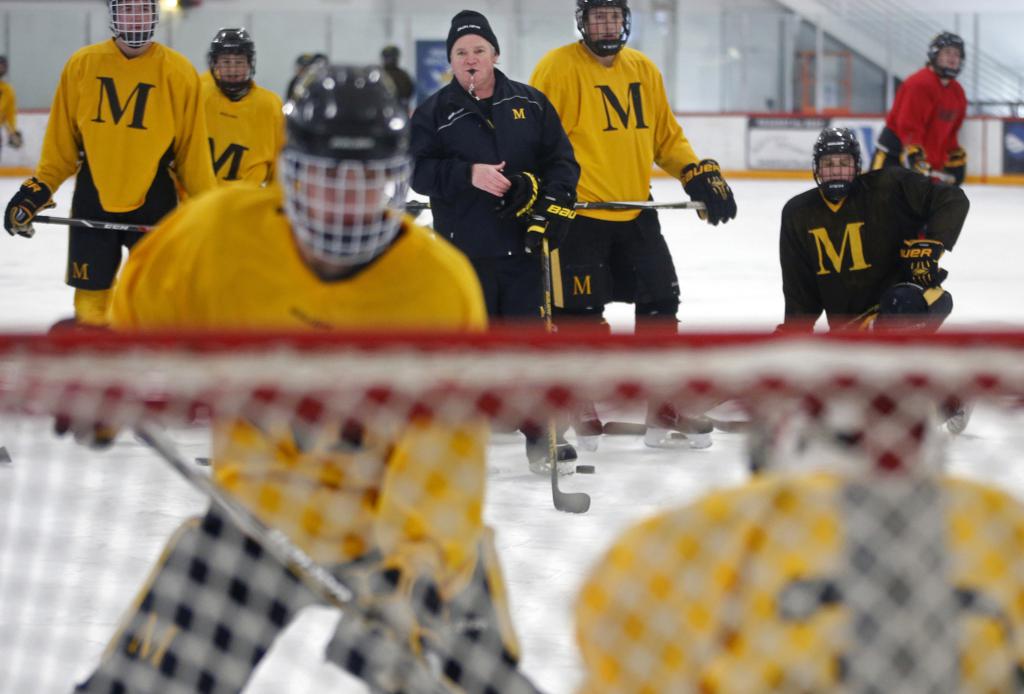 At the Mars Lakeview Arena, head coach Brendan Flaherty of Duluth Marshall oversaw practice. The school moved up to a Class 2A schedule in spite of being small in size. (Richard Tsong-Taatarii/Star Tribune)

Hockey on the edges: Duluth Marshall opts up

DULUTH – The latest addition to the boys’ hockey trophy case at Duluth Marshall isn’t a trophy at all.

It’s a framed photo, from a game in mid-December, of Hilltoppers’ players celebrating in front of their student section while a dejected Duluth East player looks away.

Marshall, a private school playing its first season as a Class 2A program, had defeated the storied Greyhounds 4-0 in the first game between the two programs in 16 years. Since 1999, East no longer scheduled Marshall because of the latter’s Class 1A status.

Marshall, with 244 students in grades 4 through 12, made the bold move to move up from Class 1A, where it had experienced considerable success. Competing against bigger, tougher programs, it hopes to attract a larger number of area hockey players by offering both a strong education and a more competitive hockey experience.

Benilde-St. Margaret’s heard those grumblings after winning Class 1A championships in 1999 and 2001. St. Thomas Academy, winners of five small-school titles in eight seasons from 2006-13, heard roars. Both metro-area private school programs have since opted up to Class 2A.

Public schools aren’t immune from the heat. Similar calls are being made for Hermantown, a team in a Duluth suburb with the same name that reached — and lost — the past six consecutive Class 1A championship games, to join the 2A ranks.

Ironically, Marshall coach Brendan Flaherty said he found himself defending the decision to move up as injuries and inconsistency contributed to his team being 1-6 before facing Duluth East. But after the shutout victory Dec. 16 at Amsoil Arena, Flaherty found 62 congratulatory text messages when he checked his cellphone. E-mails from supportive alumni poured in as well. Marshall is now 8-14-2.

“We’re dreaming big,” Flaherty said. “We certainly don’t get the number of players that Hill-Murray, St. Thomas Academy or a Benilde-St. Margaret’s does. But over time, we feel that we’re going to start building.”

Marshall and Duluth East could meet again in the Section 7 playoffs, which begin Saturday. East, which has made 16 state tournament appearances since 1991, reached seven championship games and won two Class 2A titles, is in Marshall’s sights off the ice as well.

Hilltoppers senior forward Peter Lenz, who lives in the Duluth East attendance boundary, said, “Kids who went to that game and saw us beat East and might say, ‘I want to play there someday.’ ”

Why now? Why not?

The Marshall plan is “something I’ve wanted to do for 10 years,” Flaherty said. “But our school didn’t want to do it. We revisited it about two years ago and it came to fruition.”

Kevin Snyder, in his fourth year as the school’s activities director, said the program possessed much of what was needed to succeed. The schedule, already sprinkled with Class 2A competition, would not require overhauling. Facilities were solid. The Mars-Lake- view Arena is on campus and the weight room includes a breathtaking view of Lake Superior.

Conversations with former captains as well as the incoming senior class sold Snyder.

“Class A just seems like it’s a forgotten class,” senior co-captain Lane Krenzen said. “We want to play with the best, and all of Minnesota views the best as double-A.”

The move already swayed families of some freshmen to the Hilltoppers program.

“I know for a fact that the parents saw our schedule and they wanted to play Minnetonka, Benilde-St. Margaret’s and Duluth East,” Flaherty said.

Schools can opt up for two-season cycles. Flaherty believes “we’re not going to want to go back to single-A after two years. We’re seeing pretty good results already.”

Day to day, however, hockey comes with hard feelings between the public schools and Marshall, their private school neighbor.

Plante said four players, including two sons of a Hermantown youth hockey association coach, left for Duluth Marshall. Plante said he can’t recall losing a player to the Hillltoppers’ program before it moved to Class 2A.

Randolph, who believes all private schools should be forced to play Class 2A because they draw players from a wider geographic area, said, “The day I have to recruit my own players, I’m going to move on.”

For Smalley, coaching across town at Denfeld, a less-decorated Class 1A program, Marshall’s move adds to his burden.

“It’s not an equal playing field,” Smalley said. “We’ve already had a lot of parents move to Hermantown. Loyalty isn’t there anymore.”

Randolph starred for the Duluth Cathedral program in the 1960s, before the school’s name was switched to Marshall in 1987. Despite his recruiting concerns, he is glad to see Marshall in Class 2A, Section 7. The more northern teams in that section, he reasoned, the better chance for a strong state tournament representative from the northland.

“It’s exciting that we’re with the big dogs now,” he said. “It’s a new chapter. We didn’t make an irrational decision. It’s a platform and we plan to build every year.

The Hilltoppers placed second at the Class 1A state tournament three consecutive times from 2006-08 under current head coach Brendan Flaherty.

Flaherty believes other teams “could easily make the jump [to Class 2A] and for whatever reason have decided to stay where they are.” Was Flaherty referring to Hermantown coach and friend Bruce Plante? The Hawks have reached the past six Class 1A title games, losing them all. “We respect each other and we like each other, but we do have different philosophies,” Flaherty said.