Luverne hockey: The little team on the prairie is turning heads

In a corner of Minnesota best known in high school basketball lore, Luverne has begun writing a surprising hockey chapter. 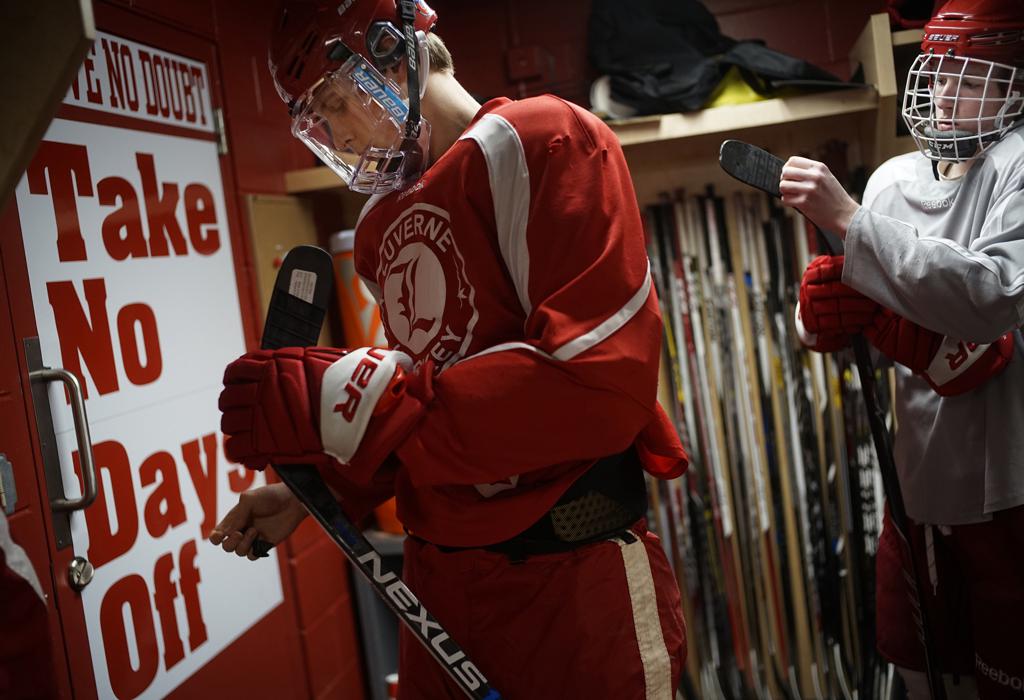 At the Blue Mound Ice Arena, the Luverne hockey team has built a strong following and culture in the region. Jaxon Nelson got ready to take the ice during practice. (Richard Tsong-Taatarii/Star Tribune)

“We’re kind of the last thing you’re going to see before you go to Mount Rushmore,” said Schroht, who coaches the Luverne boys’ hockey team. “We’re five miles to Iowa, five miles to South Dakota. You can cover three states in about 25 minutes if you really wanted to.”

In a corner of the state best known in high school basketball lore, Luverne has begun writing a surprising hockey chapter.

In 2014 the Cardinals made their debut in the Class 1A state tournament in St. Paul. Last January they skated in front of a statewide television audience on “Hockey Day Minnesota.’’ And this season they feature the state’s leading goal scorer, Jaxon Nelson, a sophomore who, by verbally committing to Minnesota, is the first Division I-bound hockey player in the program’s 17-year varsity history.

Fifty years ago, an athlete such as the 6-4 Nelson likely would have spent winters with the Cardinals basketball team, sporting a buzz-cut and helping execute a press defense feared throughout the surrounding prairie towns.

Nelson, a forward, intimidates on the offensive end, tallying 67 goals in 24 games. His talents, Schroht said, “have allowed other players to become visible to scouts, USHL teams and collegiate coaches.”

Those evaluators drop by Blue Mound Arena, built in 1991 some 30 years after the peak of basketball prowess in southwestern Minnesota. The Cardinals’ 1964 single-class state tournament title was the third in four years for a school from the region. The first to win was the storied Edgerton team that upset Austin for the 1960 championship.

The vibe is changing, however. About a half-dozen hockey families in and around Sioux Falls, S.D., moved to Luverne within months of the Cardinals’ state tournament appearance.

Expectations are high this season. Coaches voted the Cardinals (19-5) as the top seed in the Section 3 playoffs, which begin next week. Nelson, who leads the state with 110 points, and standout senior Chaz Smedsrud are two of five players left from the state tournament team. They hope to lead a roster full of players stung by last season’s section final loss on the 215-mile trip to Xcel Energy Center in March.

“There are still a lot of doubters that don’t really believe we’re that good,” said Smedsrud, who is second in the state with 88 points. “But this year, I think we can prove them wrong.”

Hockey legitimacy has not come easy for Luverne since the beginning. Erecting a hockey arena in a basketball town drew jeers.

“One of the comments I heard was, ‘That thing will be full of corn in two years,’ ” said Steve Smedsrud, father of Chaz.

That was 1991, the final year of the one-class state tournament. Expanding to a two-class system, an emotional topic at the time, gave programs such as Luverne a better chance at glory. In turn, there is greater excitement to play hockey in less-traditional settings.

Rather than endure, Luverne hockey improved because the youth programs competed at the highest levels possible. Playing in Duluth, Hibbing or Warroad forced Smedsrud and fellow dedicated parents to drive hundreds of miles. Players took more than a few lopsided losses.

Those efforts meant Brown, who arrived in 2009, walked into a situation ready to take off. Once he realized where he was going, that is.

“I thought it was Le Sueur but when I saw the Jolly Green Giant and realized I still had two hours left to drive it was like, ‘Wow,’ ” he said.

“It doesn’t have to be a $1,000 camp to become a better hockey player,” assistant coach David VanBatavia said. “It’s ice time, having the puck on your stick. As much as a Luverne hockey player wants to do right now, it’s available to them.”

Reaching the 2014 state tournament brought credibility, which helped attract better competition. The number of two-year, home-and-away scheduling agreements with Twin Cities-area teams has doubled to include Orono, Totino-Grace and St. Paul Academy. Convincing more programs has been a mixed bag, however.

Luverne’s growth outpaced many surrounding communities, evidenced by romping through Big South Conference opponents by a combined score of 151-23 this season.

“Fairmont and Worthington have asked, ‘How do you do it?’ ” said Brown, who left Luverne in 2015 to coach closer to home at St. Cloud Cathedral. “You’ve got to have numbers and talent.”

Nelson embodies the latter. More than a prolific goal scorer, Nelson validates the program through his college commitment.

“We’ve got a Division I player down here, so we’re obviously legitimate,” said Chaz Smedsrud, a talented player drafted by Sioux Falls of the U.S. Hockey League.

Described by Schroht as “humble off the ice and a beast on the ice,” Nelson has tallied 15 hat tricks this season.

“You can get really high on yourselves, and then you end of thinking that you’re better than the other team,” Nelson said. “Then they can come in and take it away from you. You have to stay constant and steady.”

Nelson, who began playing hockey at age 3, has several high-level hockey options. Months after Nelson committed to the Gophers, Tri-City (based in Kennewick, Wash.) of the major junior level Western Hockey League drafted him in the seventh round (137th overall).

Nelson said he wants “to finish it here because we have a shot at a state championship. But you just never know how this year or next year will end up.”

The focus this season is on a return trip to the state tournament. Four one-goal losses, especially one to Redwood Valley, strengthened players’ resolve. They are a better-tested team than the one that took an undefeated record into its first state tournament.

And they have captured the interest of townspeople once accustomed to basketball dominance.

“It’s a huge thing for the community,” Schroht said. “We have success together, and we’re going to share in that regardless if you’re a basketball fan or a wrestling fan. This is about Luverne, not just about Luverne hockey.”

Luverne boys' hockey at a glance

Skates without lakes? Luverne is located in Rock County, one of only four Minnesota counties without a natural lake. “There still are people who get down here and can’t believe they aren’t dodging cattle as they’re driving past,” coach Kullen Schroht said.

Support from St. Paul: Then-state auditor Mark Dayton contributed $1,000 toward construction of Blue Mound Ice Arena, where Luverne plays, in the early 1990s. The governor’s name is engraved on a donor board inside. The former hockey player and coach offered the Cardinals a stick tap in a recent statement: “The Luverne hockey program has achieved tremendous success in recent years. They have a bright future ahead of them, and I wish them all the best.”