Sam, Mike and Joe LaDoux have helped resurrect a Raiders program mired in years of mediocrity. 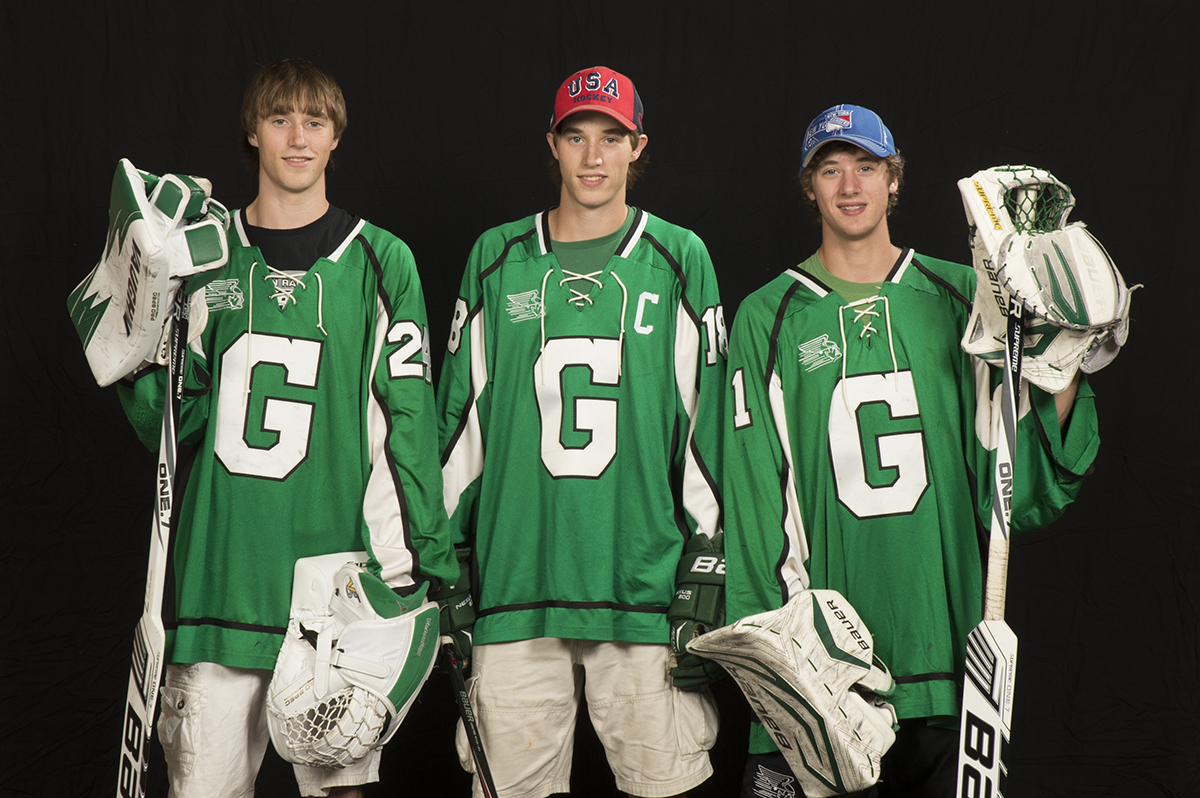 The LaDoux brothers (from left), Mike, Joe and Sam, are three of the players who helped revive the Greenway boys' hockey program. Photo by Tim Kolehmainen

Photos of former Raiders who played college and professional hockey line the lobby walls in this 54-year old building. A framed white No. 8 New Jersey Devils sweater that once belonged to 1995 Stanley Cup winner and Greenway graduate Mike Peluso is also displayed proudly.

Those kelly green banners have become relics from a bygone era when hockey thrived in Greenway and the Raiders made regular trips to the state tournament.

The program produced some of the state’s top hockey talent and reached eight state tournament between 1962 and 1992 - including five consecutive appearances (1966-1970).

Greenway won titles in 1967, 1968 and 1992 (Tier II) and also finished second in 1966 and 1969, but it hasn't had the same type of sustained success in last 23 seasons. The Raiders took third place at state in 2001, their only appearance since raising the last banner, and haven't had a winning record in at least 10 seasons.

After years of mediocrity, however, Greenway is going through a resurgence.

This season, the Raiders finished with a winning record, earned a top-10 ranking in the Class 1A coaches' poll and are ready to make a long postseason run. It's all part of an attempt to restore Greenway to its former glory. 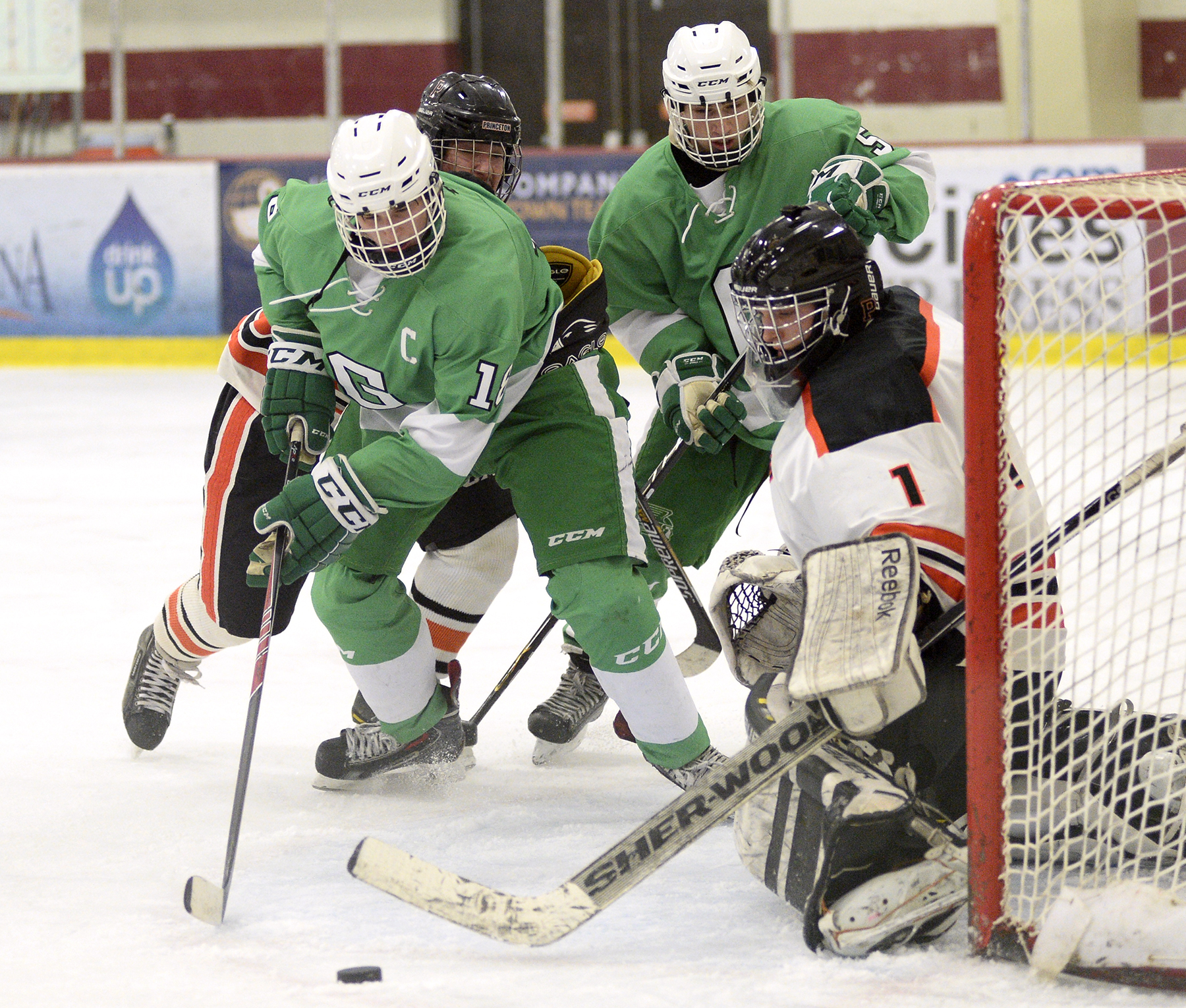 “We looked at our history and saw some good teams and thought, ‘Why aren’t we like that right now?” senior forward Joe LaDoux said. “It seemed kind of frustrating why we weren’t that good anymore.” Photo by Tim Kolehmainen

The number of students on the varsity team dipped so low in the mid-2000s that officials considered putting the Raiders on life support by expanding their co-op to include another program.

Greenway avoided that scenario thanks to the salesmen-like efforts of prominent hockey community members Jim Lawson and Pat Guyer, who went door-to-door trying to persuade youngsters to play.

The measure worked and helped lead to an increase in participation numbers over the last decade. This season, 46 skaters tried out for the varsity team while Greenway’s Bantam squad has 33 players.

A program's ability to survive is one thing, but thriving is another.

Now that the Raiders have healthy numbers, they have designs on becoming a hockey power again.

It's a goal of the players who helped resuscitate the program, including triplets Joe, Sam and Mike LaDoux.

“We looked at our history and saw some good teams and thought, ‘Why aren’t we like that right now?” said Joe, a senior forward. “It seemed kind of frustrating why we weren’t that good anymore.”

Frustrations may have eased after an impressive finish to the regular season. Greenway posted a 21-4 overall record, ranked No. 7 in the latest Class 1A coaches’ poll and received the No. 4 seed in the Section 7 playoffs. The Raiders open the postseason with a home game against No. 5 seed North Shore on Thursday.

Sam LaDoux (1) and his brother Mike honed their goaltending skills by doing double-duty early in their high school careers. Low participation numbers forced them and their teammates to play on the junior varsity and varsity teams. Photo by Nick Wosika

Restoring the Raiders hasn't been easy. When the LaDoux brothers joined the varsity team four years ago, there were only about 25 players in the program.

That meant most played on the junior varsity and varsity teams, a grind that left players tired and the teams without a lot of victories.

“Having two teams like that and not having a lot of guys, it was tough,” Joe said.

However, it provided plenty of playing time for everyone and expedited the learning curve for goaltenders Sam and Mike.

“Coming up through the program, our teams weren't the greatest." Sam said. "So we got to face a lot of shots in games, which prepared us (for now)."

The payoff came this season and with it, a new perspective - especially for those players who endured years of losing.

“Now, sometimes you sit back and say, ‘Wow, we actually are a good team’ when we beat teams we normally wouldn’t have beaten,” Joe said.

Greenway's next step toward its goal will be to upset a more traditional hockey power such as Hermantown or Hibbing, something the Raiders came close to doing this season.

The No. 1-1A Hawks edge Greenway 2-1 in a nonconference matchup, while the No. 4-1A Bluejackets won the Iron Range Conference title after finishing just two games ahead of the second-place Raiders. Greenway's only two conference losses were to Hibbing by a combined 10-4 score.

Clafton took over the program knowing plenty about its history, but admitted he wasn't fully prepared for what he discovered early on in his tenure.

“The surprise was that there were two twin goalies,” Clafton said. “I (thought), “Oh boy, how is this going to work out?"

Clafton said his biggest concern was deciding which one would start without the other taking it as a slight.

So Clafton implemented a “take-your-turn approach," often alternating starts for Mike and Sam.

When Clifton couldn’t decide which twin to start, he consulted Joe for an honest assessment of Mike and Sam’s current mental state and how they had played in recent games. 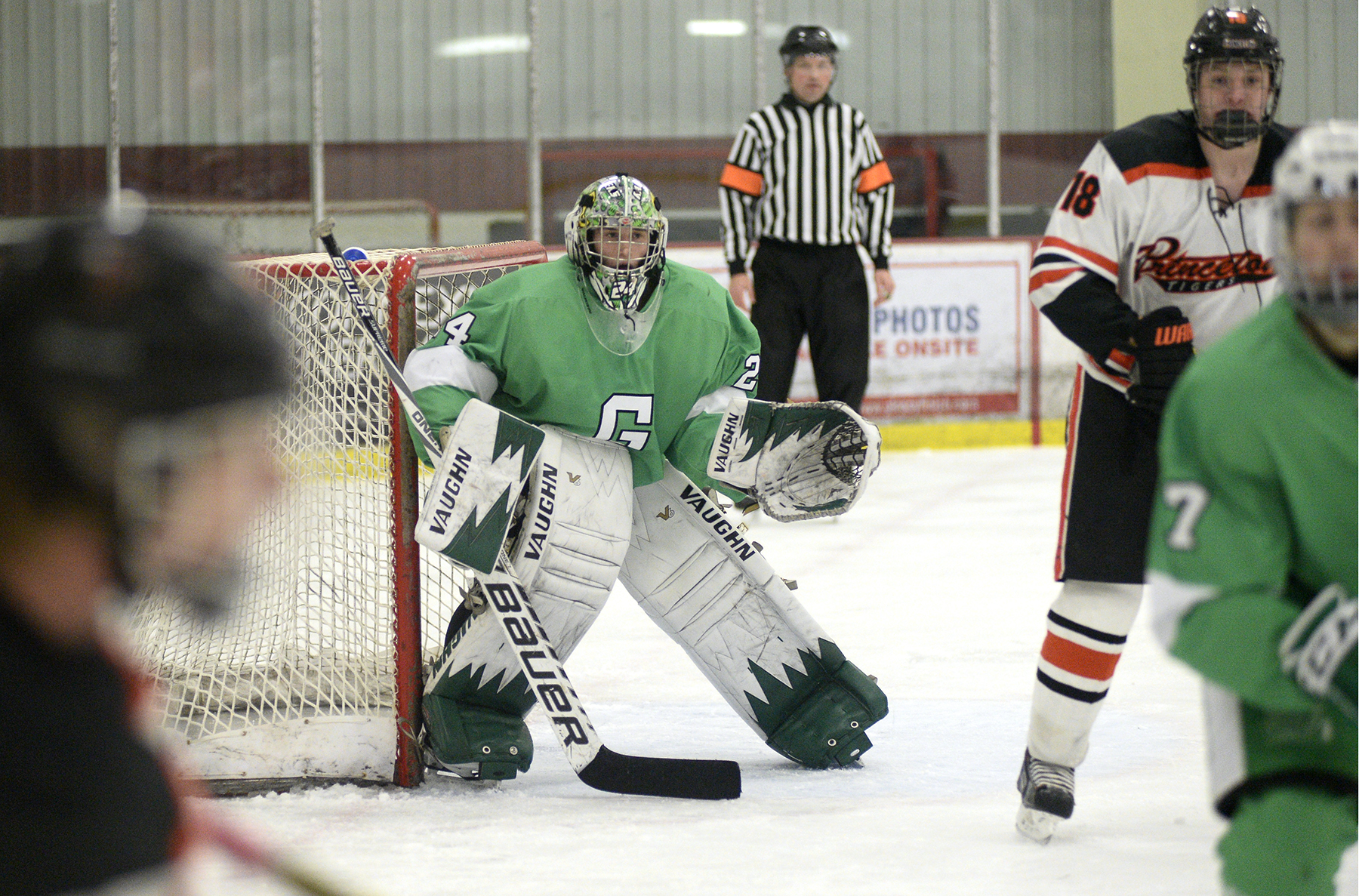 Mike LaDoux (24) said splitting starts in goal with his brother Sam was difficult, but added each always supported the other no matter how he was playing. Photo by Tim Kolehmaien

If Mike and Sam were upset with the process, neither let their feelings impact the team.

At the Schwan Cup Open Division holiday tournament in December, Mike started the first two games while Sam got the nod for the championship game.

Mike’s reaction to learning he wouldn’t be starting was a perfect example of how the brothers treated splitting time in net, Clafton said.

“Mike hit his brother in the chest protector and said, 'Alright, let’s go. Get 'er done, Sam,' ” he added.

Call it sibling rivalry with plenty of brotherly love.

“It’s hard, but you have to support him because you know when you’re in net and you’re doing well, he is going to give you support back,” Mike said.

Clafton said the way Sam and Mike handled sharing starts speaks to their integrity, a trait instilled by their parents.

And it's evident in almost everything the brothers do to help the team be successful, such as taking care of the team’s jerseys, grabbing supplies for road games and even helping repair the television in the locker room when it broke during a film session, Clafton added.

Their selflessness stems from the values commonly found in the people on the Iron Range, and is the reason Clafton describes Coleraine and the surrounding towns as a “blue-collar community.”

“If you need something or want something, you get it done yourself. And that is kind of the way (the LaDouxs) have been their whole lives,” Clafton said.

But the triplets weren’t the only players embracing the community ideal.

The entire team made an effort to endear themselves to area residents, including making blankets for senior citizens to creating a video discouraging domestic violence, Clafton said.

The efforts have resulted in higher ticket sales, he added.

“If you want people to come to your games, you have to treat them with respect,” Clafton said.

“I walked in the Hibbing game and I couldn't find a seat...That made me smile because that is the way it used to be.”

Antonovich, who played hockey for the Gophers and the Minnesota North Stars, is overjoyed to see the admiration the team has for the community.

Antonovich, who lives near Coleraine, also said the team’s success has been a positive for an area where things such as jobs “haven’t been good for a long time.”

“This is something we can all grab onto,” he said.

The community has undeniably embraced the Raiders.

Prior to this season, Antonovich would walk into Hodgins-Berardo Arena and see the stands as barren as the open-pit mines found across the Iron Range.

Only the players’ parents came to watch.

But now, attending games played beneath those barn-like rafters and kelly green state championship banners has felt just like old times for Antonovich.

“I walked in the Hibbing game and I couldn't find a seat,” Antonovich said. “That made me smile because that is the way it used to be.”

Greenway at a glance

*The Raiders boys' hockey program co-ops with Nashwauk-Keewatin High School, with an enrollment (9-12) of 124.

Former Raiders who played in the NHL

Closer look at the LaDoux triplets