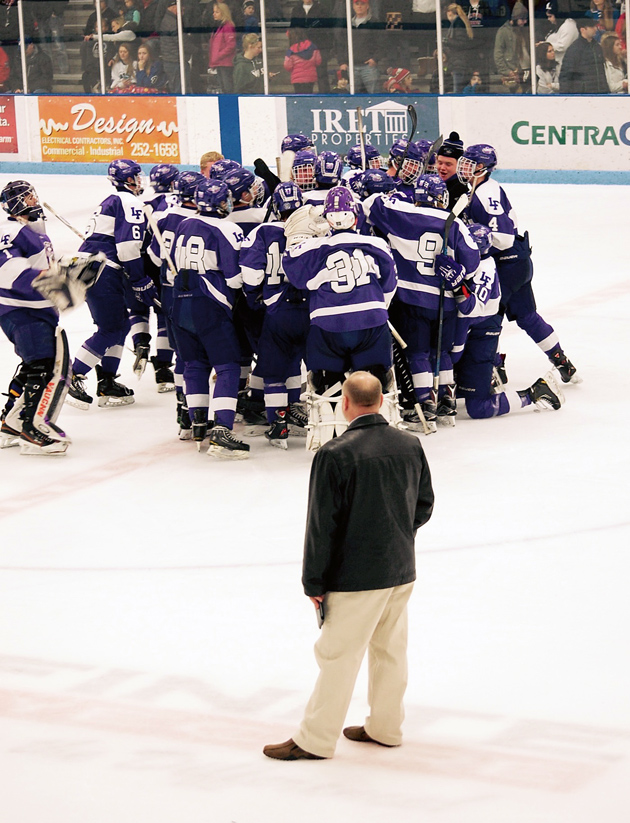 The picture shows a mob of Little Falls players celebrating near center ice after upsetting St. Cloud Apollo in the Class 1A, Section 6 semifinals.

Standing on the ice a safe distance from the mayhem is longtime Flyers coach Tony Couture, who describes his part of the Fogartian scene as: “I was living in a dream.”

No. 4 seed Little Falls had no business beating the top-seeded and No. 3-state ranked Eagles 4-1 on Feb. 2 in what has been termed by some as “Bloody Saturday” for the copious amount of sectional semifinal upsets. In Class 2A, No. 3 Minnetonka, No. 4 Holy Family Catholic and No. 5 Blaine also all lost in Class 2A semifinal games Saturday.

The Flyers, who needed overtime to beat Fergus Falls 4-3 and escape the section quarterfinals, entered the postseason having won just two of their previous eight games. Included in that slide was a 3-2 overtime loss to Apollo on Jan. 26, an outcome that showed Little Falls could play with the defending section champion Eagles. Beating the 23-2-0 Eagles, however, required a masterful, 42-save performance from goaltender Justin Pekula, who outplayed Apollo’s highly decorated ace goaltender Nick Althaus.

“We have no high-end kids,” Couture said about his lunchpail group. “We are just kind of a grinder type team. (Saturday) night he was fantastic.”

Shocking outcomes between these teams shouldn’t be entirely unexpected. Apollo was on the winning side of one of the most outlandish outcomes in state playoff history when, as a No. 9 seed, it knocked off the top-seeded Flyers 3-1 in the quarterfinals of the 2010-11 Section 6 playoffs. It is believed that a No. 9 or lower seed had never previously defeated a No. 1 seed. And it hasn’t come close to happening since.

Apollo stung the Little Falls again in the 2012-13 season, upending the top-seeded and heavily favored Flyers 6-3 in the section championship as the No. 2 seed.

On Saturday the roles were reversed, as Little Falls seemingly could do no wrong. Meanwhile the frustration level for Apollo reached the stratosphere.

“As the game went on, we gathered that confidence we needed to hold them off,” said Couture, in his 23rd season guiding the Flyers. “By no means did we play not to lose. It was just identical to the 2011 game we lost, only the reverse feeling -- kind of magical.”

Little Falls hopes to extend its dream run at 7 p.m. on Thursday against St. Cloud Cathedral in the section finals at the Municipal Athletic Complex in St. Cloud. It will require another upset to do so, however. The No. 2-seeded Crusaders beat the Flyers by scores of 4-3 and 7-4 in the regular season.

“It just happened to be our night (on Saturday),” Couture said. “Hopefully it will be our night again on Thursday.”