Eden Prairie picked up the top seed in Class 2A despite six more losses than No. 2 seed Stillwater 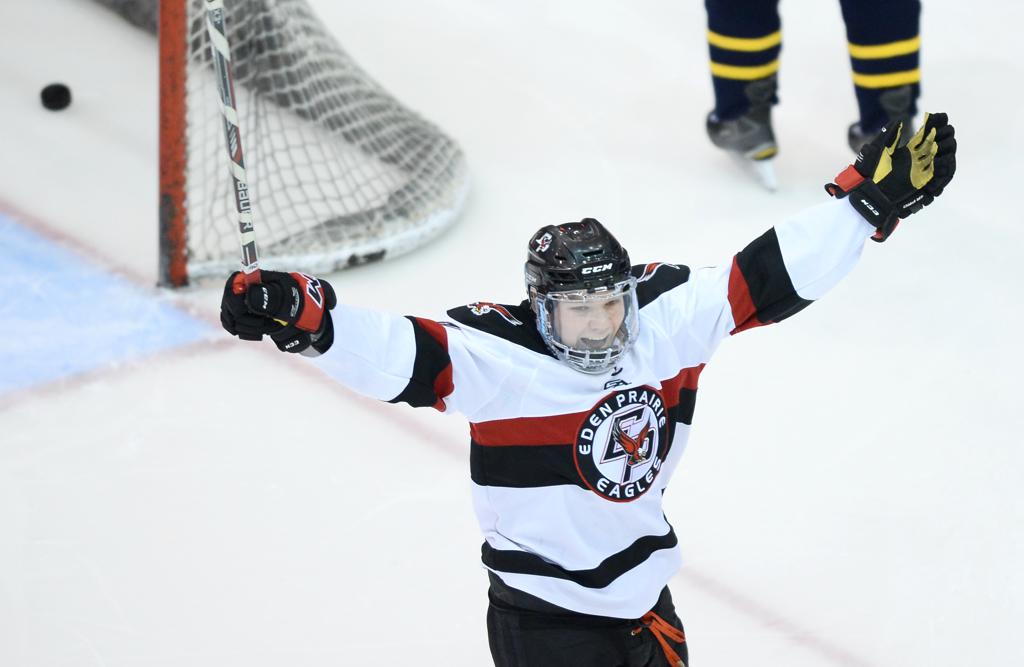 Eden Prairie defenseman Nicky Leivermann and the Eagles are the No. 1 seed in the Class 2A boys' hockey tournament (Aaron Lavinsky/Star Tribune)

A Hill-Murray upset would have made Eden Prairie a lock for the top seed at state, Smith figured. Stillwater’s overtime victory, however, meant a more muddled picture. The Ponies lost one game all year — six fewer than Eden Prairie.

Smith admitted surprise when his Eagles were awarded the No. 1 seed Saturday. The Ponies are No. 2, followed by Wayzata, Grand Rapids and Bemidji.

“I thought Stillwater would be No. 1,” Smith said. “But I also think we’ve earned our spot. We beat Burnsville, Farmington, Grand Rapids and split with Wayzata. We lost to Benilde-St. Margaret’s twice and they were undefeated. And we lost to Minnetonka and Blaine and they were in the top-10 or top-5 most of the season. So if our worse losses were to Edina, our rival, that’s pretty good.”

While disappointed, Stillwater coach Matt Doman said, “They did lose more games but I know I voted them No. 1.”

Saturday morning saw each head coach cast electronic votes for the other seven qualifying teams. The highest and lowest votes were thrown out and the top five seeds were selected. The remaining three seeds were chosen by blind draw. No conference calls. No opportunity for politicking.

Frustration with the results remained, however.

“I don’t think we got the respect we should’ve earned,” said Doman, whose team is making its second state tournament appearance in program history. “But every coach earned the right to put teams where they think is appropriate.”

A fresh tournament field includes Farmington, making its Class 2A debut. Burnsville and Grand Rapids previously reached state in 2007. Anoka is back for the first time since winning the 2003 title. Of that group, only Grand Rapids was the top seed in its respective section.

“Those teams might not have been the favorites but most of them dominated in the championship game,” Doman said.

Smith said: “All the teams are playing well at this stage. Every quarterfinal game has a lot of intrigue.”

The big-school portion of the tournament begins Thursday at Xcel Energy Center. The Class 1A tournament starts Wednesday.