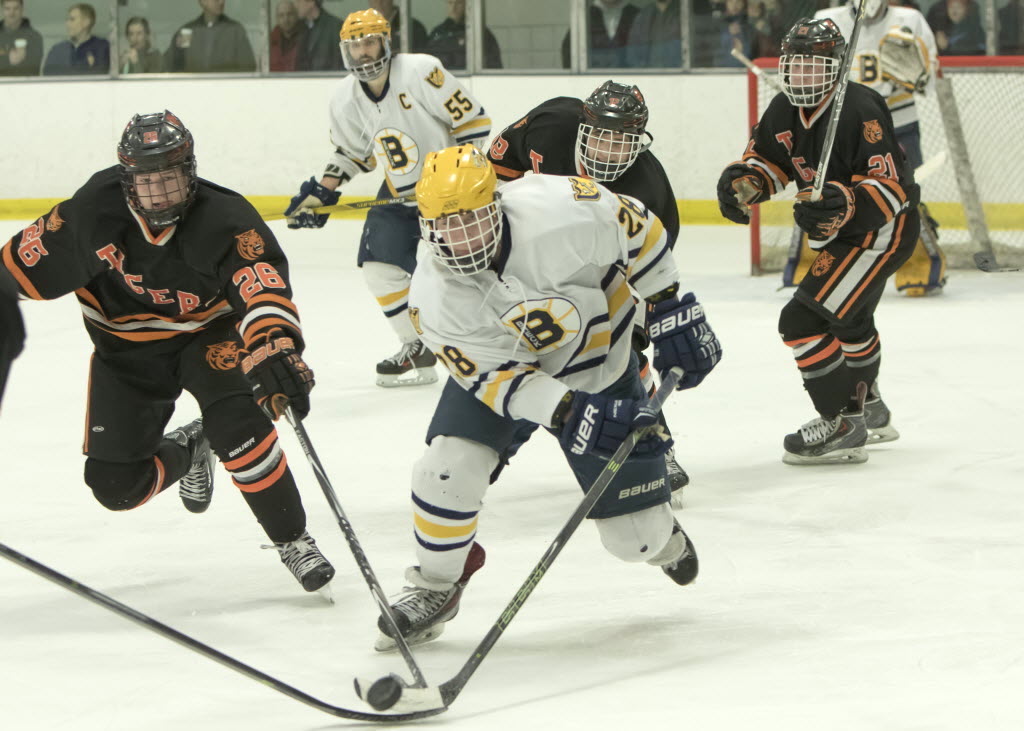 Scouting the Scarlets: Heroes were plentiful for Mankato West as the Scarlets stunned Northfield 1-0 to reach the state tournament for just the second time in program history. Freshman Nick Wieben scored the lone goal midway through the third period, junior goaltender Jackson Peterson stopped all 25 shots he faced and workhorse defenseman Kyle Looft, a rail-thin 6-foot-3, 180-pound junior, didn’t leave the ice during the final 7½ minutes. “He’s going to be really fun to watch once he gets his man muscles,” seventh-year coach Curtis Doell said about Looft. Mankato West lost to Northfield by a combined score of 13-5 in two regular season games before knocking off the co-Big 9 Conference champion Raiders in the section final. Leading scorer Tyler Loe (22 goals, 47 points) is a senior forward who had suffered fractures in his back and foot in previous seasons.

Worth knowing: Breck is making its seventh state tournament appearance in Larson’s eight years as head coach (the Mustangs won titles under Larson in 2009 and 2010). 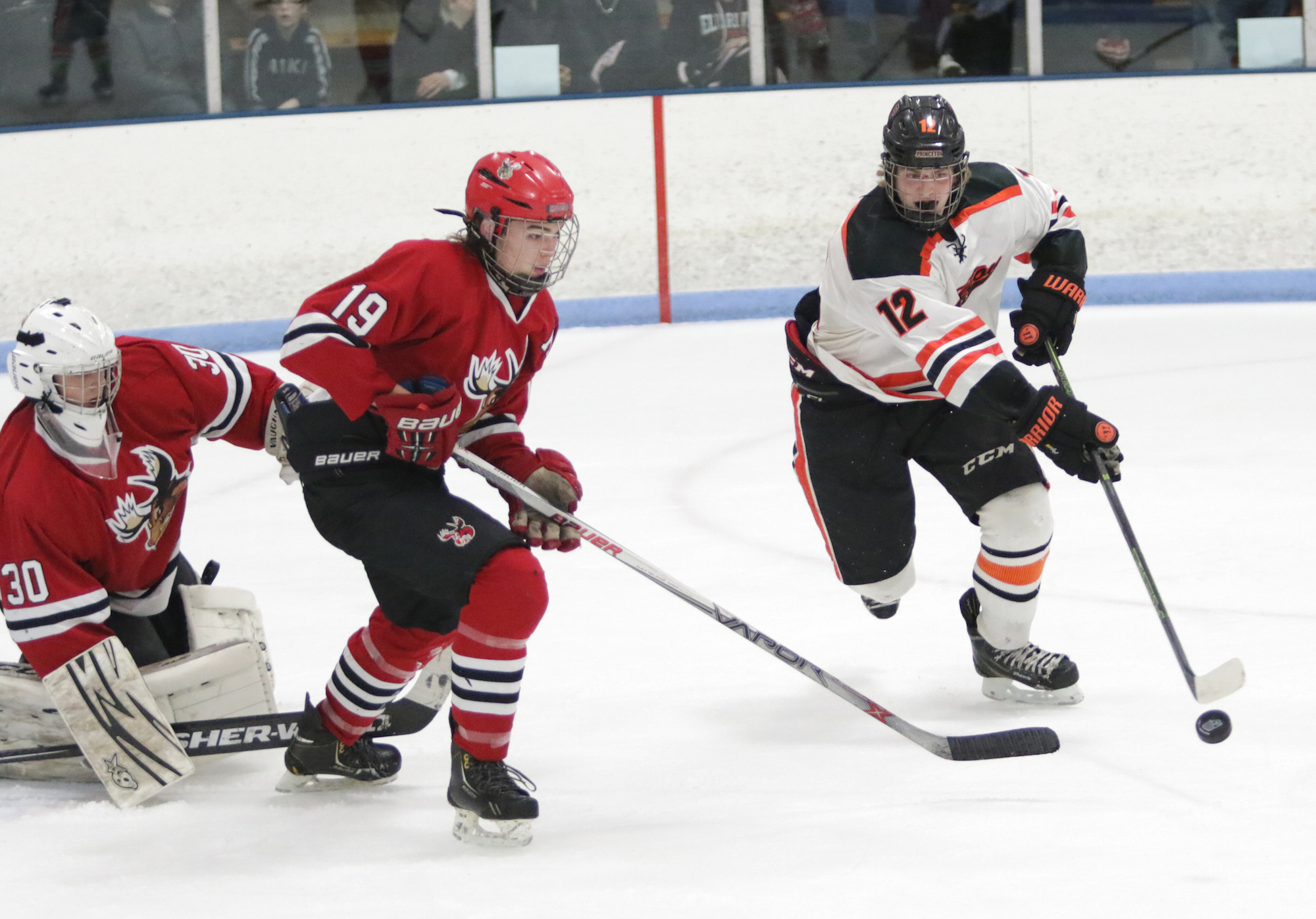 Princeton's Jake Oakes tracks down a loose puck in front of the goal in the Class 1A, Section 5 championship at Champlin Ice Arena on Feb. 25. Photo by Cheryl Myers

Scouting the Tigers: Top-line forward Jake S. Carlson, a junior who leads the Tigers with 55 points, stands 5-6, weighs in at 160 pounds and is nicknamed “Little Jake.” He’s not related to Jake D. Carlson a senior defenseman with one goal and four assists who, naturally, goes by the moniker of “Big Jake.” Tyler McAlpine, second cousin to NHL defenseman and Elk River native Paul Martin, leads Princeton with 25 goals and ranks second all-time in the program in career scoring with 141 points.

Scouting the Prowlers: Ethan Johnson finished fourth in the state in the regular season with 40 goals. The 5-foot-10, 160-pound forward has tacked on six more in the playoffs to break the school’s previous single-season goal-scoring record held by Jack Erickson, who scored 42 during the 1950-51 season. Senior goalie and co-captain Kade Nelson (1.95 goals-against average, .909 save percentage) is also the starting quarterback on the Prowlers’ football team.

Worth knowing: Princeton junior forward Lucas Voce is the grandson of Dan Voce, an All-State player who skated on Eveleth’s top line alongside the legendary John Mayasich during the Golden Bears’ run of four straight undefeated seasons in the late 1940s and early 1950s. 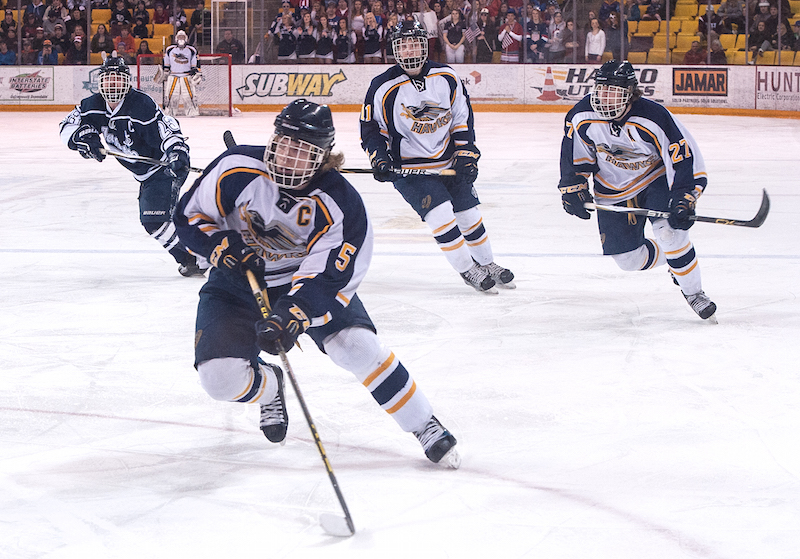 Hermantown's Wyatt Aamodt (5) brings the puck up the ice ahead of teammates Cole Koepke (27) and Ryan Sandelin (11) in the Class 1A, Section 7 championship at Duluth's Amsoil Arena on Feb. 24. Photo by Matthew Moses

Scouting the Dragons: Senior power forward David Raisanen, a hulking presence at 6-6, 215 pounds, has scored 41 goals this season, 10 more than the Dragons’ No. 2 goal scorer Jared Pedersen, also a senior. Yet another senior, defenseman Ben Haugo, has 15 goals, including the winner in overtime against Luverne in the Section 3 championship. Litchfield/D-C, which hadn’t advanced out of the section quarterfinals in each of the three previous seasons, beat all three of this year’s playoff opponents (Marshall, Hutchinson and Luverne) by one goal. The Dragons last reached the state tournament in 2008, when they lost 4-0 to Warroad and 7-0 to Mankato West.

Scouting the Hawks: Hermantown’s mind-boggling run of runner-up state tournament finishes in each of the last six seasons is an unprecedented “feat” in Minnesota high school sports. All those championship game losses serve as, “A big cloud hanging over us,” said coach Bruce Plante. The 67-year-old Plante, in his 27th season guiding the Hawks, earned his 500th career victory this season. The Hawks have two potent scoring lines, a defensive corps led by Mr. Hockey award finalist Wyatt Aamodt (five goals, 33 assists and dozens and dozens of bone-crunching hits) and a battle-tested goaltender in senior Luke Olson (1.36 goals-against average, .940 save percentage).

Worth knowing: Hermantown junior forward Ryan Sandelin, who has 23 goals and 30 assists and plays on the Hawks’ top line, is the son of Minnesota-Duluth men’s hockey coach Scott Sandelin. 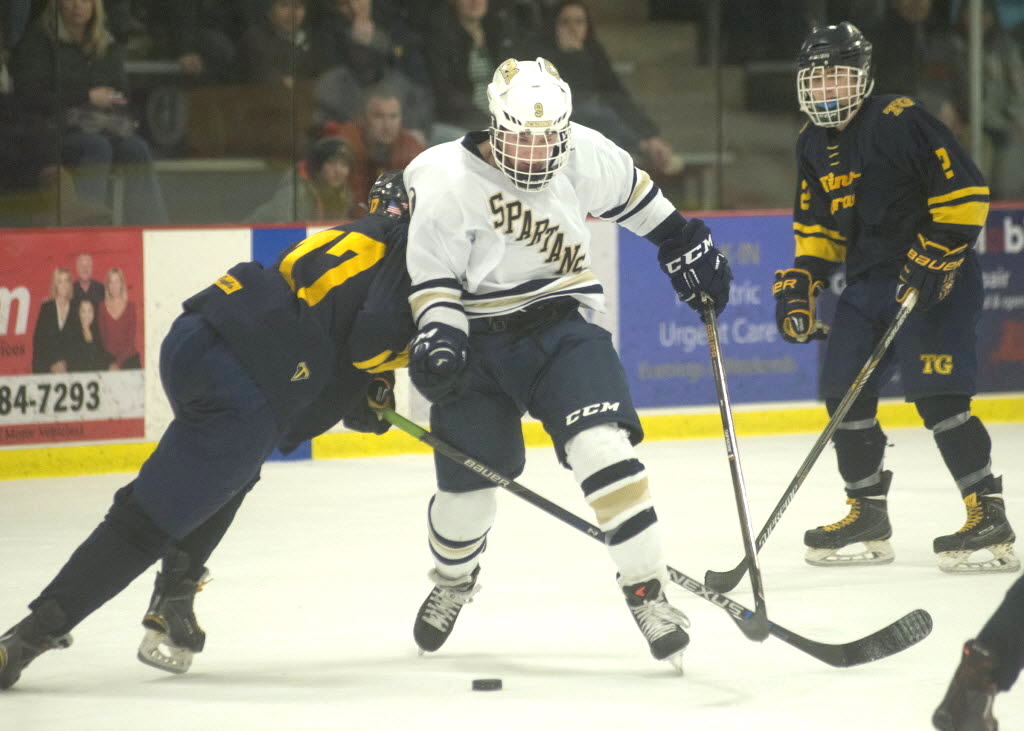 St. Paul Academy's Devlin McCabe keeps his eye on the puck as he weaves around Totino-Grace's Nick Holtan during the second period of the Class 1A, Section 4 championship on Feb. 26 at the Roseville Ice Arena. Photo by Matthew Hintz

Scouting the Crusaders: First-year coach Derrick Brown, a Princeton native who played on the Tigers’ 2002 and 2003 state tournament teams, previously guided the Luverne program to prominence before taking the St. Cloud Cathedral job in the offseason. “I inherited a top-10 program,” Brown said. “I was just trying not to screw it up.” The Crusaders’ margin of victory has steadily grown with each playoff game. They beat Alexandria 5-2, Sartell-St. Stephen 7-2 and Little Falls 10-2 in sectional play. Logan Neu, a 6-foot-1, 200-pound senior who has been on the varsity since he was a freshman, leads Cathedral with 54 points (22 goals, 32 assists). Towering sophomore goaltender Keegan Karki (he stands 6-5) played in the Upper Midwest High School Elite League last fall and earned the Crusaders’ starting role midway through the season.

Worth knowing: St. Paul Academy has lost just once since mid-January, a 4-3 overtime setback to No. 2 tourney seed Breck.

• Thief River Falls senior forward Ethan Johnson had one of the great individual performances of the season so far when, in baseball parlance, he hit for the cycle by scoring four goals (one even strength, one shorthanded, one on the power play and one into an empty net) in the final eight minutes of a come-from-behind 4-2 win over two-time defending Class 1A champion East Grand Forks on Feb. 9. He scored two more third-period goals against the Green Wave in the Prowlers’ 3-1 Section 8 championship victory.

• St. Paul Academy is playing in its first Minnesota State High School League-sanctioned state tournament. Still, this is a program oozing state tournament history. The Spartans won five championships in 15 appearances from the 1940s through the 1970s back when the MSHSL didn’t allow private schools in its state tournament. The alternative for those programs was the old Catholic Schools, and later re-named Independent Schools, state tournament.