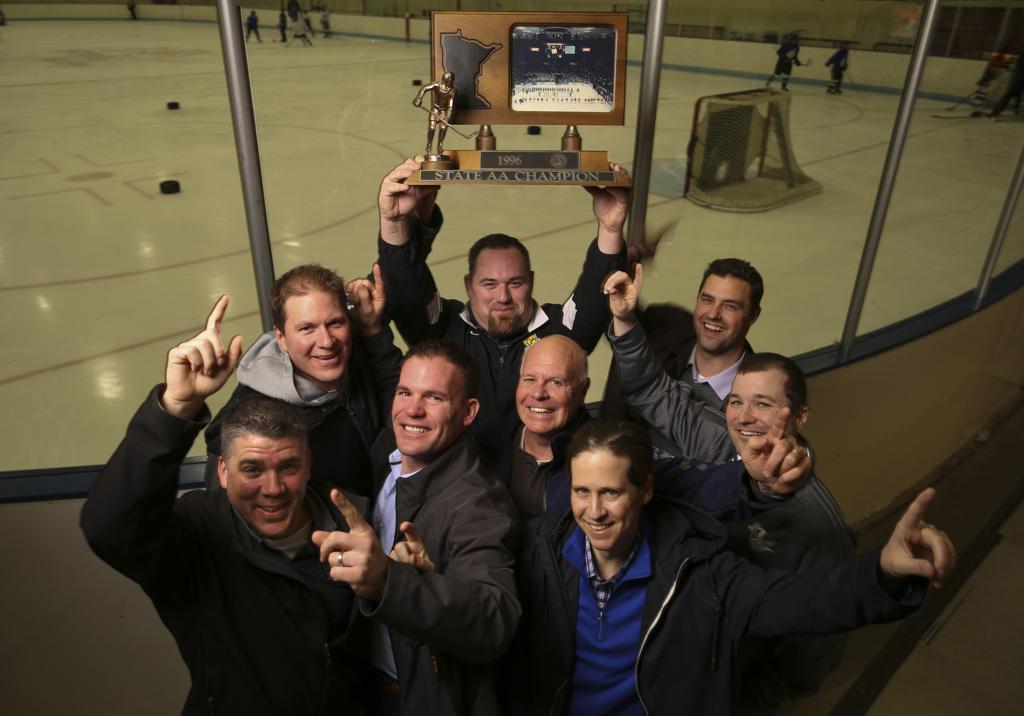 
When dining out with friends, Aaron Dwyer suffers razzing about his goal 20 years ago that ended perhaps the finest high school hockey state tournament game ever played.

“Do you know who this is?” Dwyer’s friends will ask the server as the former Apple Valley defenseman shakes his head.

“You would get the occasional person who remembered and would comment about what a great game it was,” Dwyer said.

The 1996 state tournament semifinal game between Apple Valley and Duluth East stretched five overtimes — a record 93 minutes and 12 seconds — played at a hectic, sometimes reckless pace. Begun on a Friday night, it didn’t end until 1:39 a.m. Saturday when Dwyer’s slapshot gave the Eagles a 5-4 victory at the St. Paul Civic Center. Teammate Karl Goehring made 65 saves, a tournament record that, like the game, has endured.

In the tournament hailed as Minnesota’s signature high school sports stage, the game — before nearly 17,000 fans and a statewide television audience — still commands a certain reverence from players of that era, now in their late 30s, coaches and the sport’s followers.

Goehring, who went on to star at North Dakota, enjoys annual questions about the game. Hockey players from Apple Valley to Anchorage have asked former Eagles center Chris Sikich to see a tape of it.

Though his team lost and was victimized by a controversial no-goal play, Duluth East coach Mike Randolph upholds the game’s place in history.

“Our game with Eden Prairie was a heck of a game but there’s nothing close to 1996,” said Randolph, whose Greyhounds fell 3-2 in three overtimes on Kyle Rau’s sliding goal in 2011. “It just builds and builds.”

Duluth East, the defending state champions, was favored to repeat, led by high-scoring forwards Dave Spehar and Chris Locker. Apple Valley, meanwhile, had lost only one game all season. A combined 18 players from those teams went on to play Division I college hockey.

Given the chance to relive the night that began on March 8, those players do not tire of answering questions.

Playing the game was another story.

Apple Valley’s Brad DeFauw needed intravenous fluids at the hospital after the game. Breathing so hard between shifts left him unable to consume enough water. Locker started to go into shock and needed help removing his equipment.

Watch the goal that ended the game

“People still come up to me and say, ‘That was the best game I’ve ever watched,’ ” Locker said. “I’ve watched the whole game a few times. Sometimes I think, ‘Why did I tie the game up to go through that?’ ”

‘It was a track meet’

The back-and-forth game intensified in the third period when Apple Valley’s Erik Westrum, who went on to play for Minnesota and professionally, completed a hat trick to give the Eagles a 4-3 lead.

Hat tricks were Spehar’s specialty, having accomplished them in five of his six state tournament games. The only team to stem the barrage? Apple Valley.

A magician with the puck, Spehar remained dangerous. He had scored 1 minute and 16 seconds into the third period against Apple Valley’s third line. Eagles co-head coach Larry Hendrickson reacted by benching his third line for the duration of regulation and overtime.

No matter. Spehar slid the puck to Locker for the tying goal with only 39 seconds left in regulation.

As the teams headed to overtime, their coaches instructed them to remain aggressive. Firewagon hockey ensued, a pace maintained despite short benches, adding to the long game’s legend.

“Both teams were reckless,” Locker said. “It was a track meet. And both goalies were unbelievable.”

Goal or no goal?

Goehring and his Duluth East counterpart, Kyle Kolquist, who finished with 49 saves, traded star turns as overtime wore on. Incredibly, they combined for 27 saves in the fourth overtime.

Some argue the game should never have lasted that long. In the second overtime, Duluth East’s Matt Latour tipped a Dylan Mills shot under the crossbar. The puck deflected down to the ice and play continued. The television replay seemed to confirm the puck went in before quickly caroming out.

Was it a goal?

“No question about it,” Randolph said.

“Could it have been? Yeah,” Westrum said.

“We deserved to lose — in that era,” said Spehar, a nod to a lack of instant replay. Official goal review did not start until 2006.

The game wore on. By the fourth overtime Spehar, up against the defensive efforts of Sikich, had broken both of his sticks. He borrowed one from teammate Rheese Carlson.

As Vern Goehring, Karl’s father, watched the game at the Civic Center, he called a friend watching at home and asked him to put a fresh cassette in the VCR to record the rest of the game.

His son had more pressing concerns. An intense yet introverted competitor, Goehring’s facade crumbled as the number of shots faced accumulated and the pressure rose.

“It’s funny what can happen when you’re pushed so far,” said Goehring, who was near tears and “losing it” in the locker room after the second overtime. A pep talk from assistant goalie coach Paul Ostby eased the tension.

“He helped me learn to perform at a high level when it mattered the most,” Goehring said. “That night he helped me get refocused.”

Goehring, who stood only 5-6, broke the tournament record for saves in a game in the fourth overtime. When notified over the public address system, the crowd — many of the 16,934 remained — gave him a standing ovation.

Finally, at 2:12 of the fifth overtime, Dwyer fired his slapshot through traffic.

“I got good wood on it, let it go and luckily it went in,” he said. “Our team had the mentality to never take a practice off and that game is proof of that.”

Chosen for a postgame interview, Dwyer took the blame for his turnover in regulation that led to Locker’s tying goal. Watching footage of the game in his basement last week, Hendrickson said, “I’m glad he said that.”

The best team Hendrickson said he ever coached, a group of players with little championship experience, matured and became accountable to each other.

Later that Saturday, before Apple Valley played Edina for the championship, Randolph entered the Eagles locker room and offered well-wishes. The game featured a goal and an assist on the game-winner by Aaron Fredrickson, who had sat on the bench and watched with his fellow third-line forwards during all of the overtimes.

The 3-2 victory gave Apple Valley its first and, a generation later, only hockey championship.

While players felt more relief than joy when the semifinal marathon ended, the year-end team banquet was the emotional opposite. DeFauw and his teammates knew while their story would be told for years, this team would never play together again.

“We didn’t want it to end,” DeFauw said.

More thoughts from 20 years ago

Gone but not forgotten: Two years after the epic game, the St. Paul Civic Center was torn down to make way for Xcel Energy Center on the same site.

Informal reunion: About a dozen players from the 1995-96 Apple Valley team purchased tickets to this week’s state tournament games Thursday and Friday, their first such gathering in about a decade.

Quote: “It seems like everybody was at that game or watched it. We were fortunate Duluth East tied the game or it would just be another game.” —Apple Valley co-head coach Pat Westrum.