With the NHL lifestyle in the rear-view mirror, Trent Klatt has found a new passion in coaching. 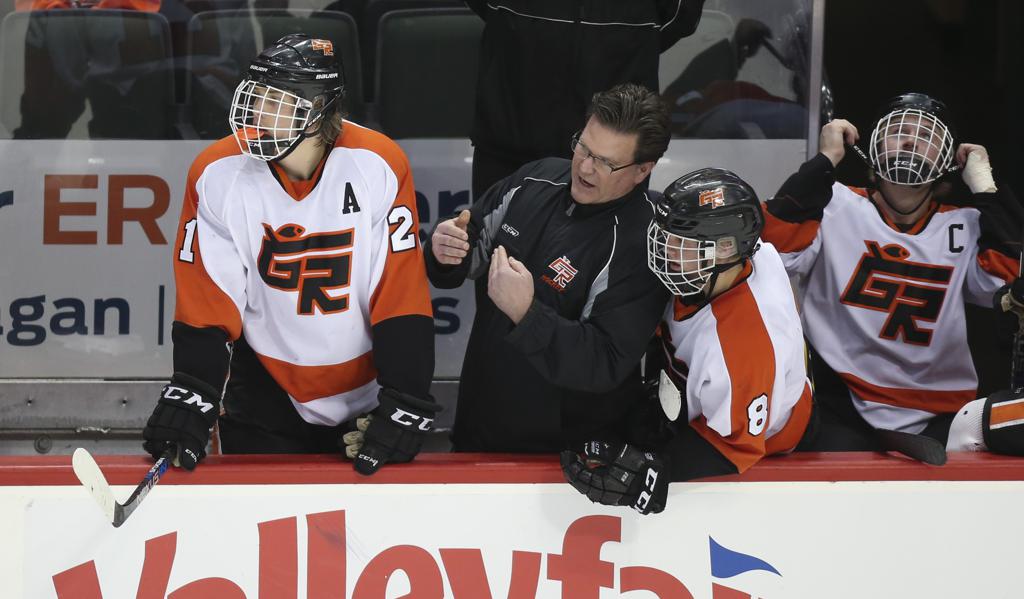 Trent Klatt had two dreams as kid growing up in hockey: play in the state tournament, play for the Gophers.

He got halfway there.

Klatt became a Mr. Hockey winner at Osseo before continuing his career in Dinkytown, but the state tournament remained an unreached destination.

He can check that off his bucket list now, too.

In his first season as a high school coach, Klatt led Grant Rapids to the Class 2A tournament for the first time since 2007.

“I feel like I got my second chance,” Klatt said.

A sweet reward greeted him and his team late Thursday night.

“I’m just happy to be along for the ride,” Klatt said.

He was not unlike many Minnesota kids growing up. He attended the tournament every year, hoping someday he could take part in the spectacle.

That moment finally came, albeit in a different capacity. His excitement hasn’t suffered.

“I don’t get to actually play but I get to be on the bench and watch these kids get to enjoy the moment,” he said. “Through their eyes I get to see it, feel it, breathe it and live it.”

This was never part of his grand plan, the coaching part. Klatt played for five teams in his 14-year NHL career, beginning with the North Stars.

He was a member of the hated Vancouver Canucks team that lost to the Wild in the 2003 Western Conference semifinals. Klatt scored the winner in overtime in Game 1 of that series and played on the same line with the Sedin twins. “I was called the triplet for a while,” he joked.

Klatt retired in 2005 and basically did nothing except hunt for one full year.
“I had to get it all out of my system,” he said.

Once boredom arrived, he realized he needed a job as a source of income and to keep from going stir crazy.

He loved the work, but hated the travel and time away from his wife and five kids. From November to March, he spent roughly 25 nights a month on the road.

“I know my way through every airport, every car rental place, I know which hotels to stay at,” he said.

He also knew he’d had enough. Klatt gave Snow a year’s notice that he would leave the job last July to spend more time with his family.

Grand Rapids began looking for a head coach around the same time. Klatt had coached his daughters’ youth teams and helped with the varsity when his schedule permitted. Friends encouraged him to apply.

But then he did sign up, and got the job.

Klatt found his way to Grand Rapids years ago through marriage. His wife, Kelly, has an identical twin named Kerby. She is married to Klatt’s former Gophers teammate Ken Gernander, who is from Coleraine and bought a house on a lake near Grand Rapids.

The Klatts bought a home next door a few years later. Kelly Klatt coaches the Grand Rapids softball team. Her husband looks like a natural in his new gig, too.

“I absolutely love it,” he said. “I don’t know how else to describe it.”

Klatt walked into a good situation. His team is blessed with talent, including Mitchell Mattson, a Mr. Hockey finalist and North Dakota commit.

A state tournament berth in his rookie season shows that Klatt knows how to put the puzzle together and impart his hockey knowledge.

“Unless they fire me, I plan on being here,” he said.

Does he consider himself a coach now?

“Ah man, can I call myself a coach and a scout?” he asked.

“The thing I love about scouting is at the end of the day, you can watch a game, identify players, you do your game report and you can let it go. With coaching, you coach a game, you watch the video, you see mistakes and [think] ‘I’ve got to fix that, I’ve got fix that.’ I can’t let it go. You care about these kids and I’m trying to make them better.”