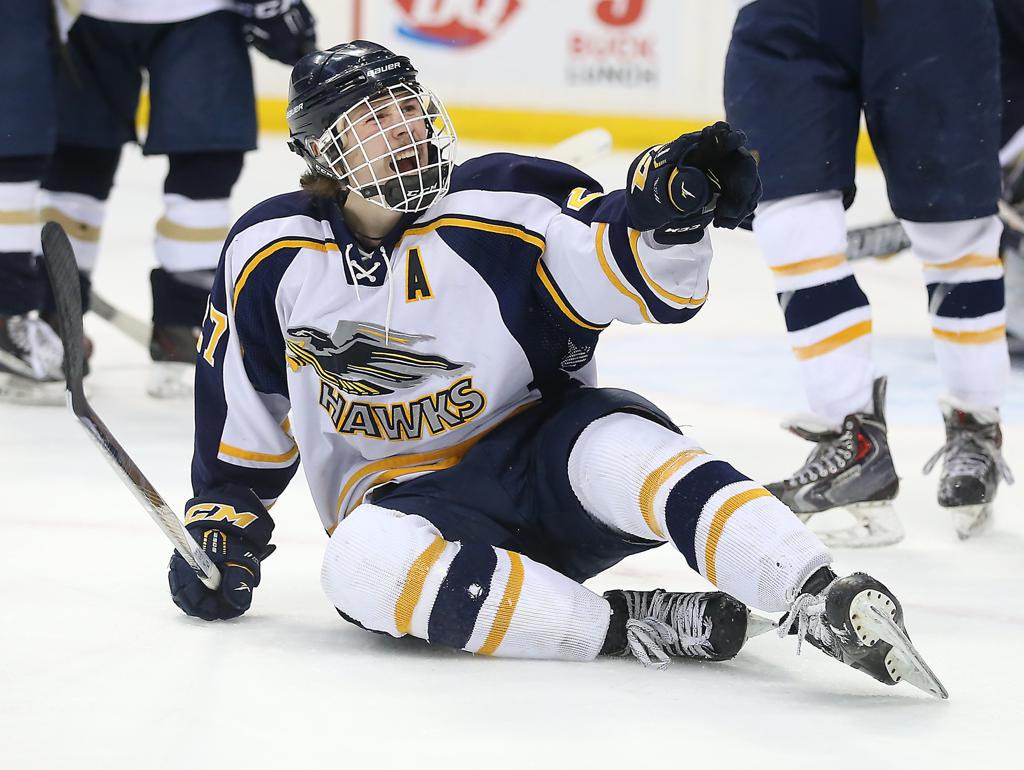 Video: Is this Hermantown's year in Class 1A?

Bruce Plante can’t escape the question. Not in public, not in cyberspace, not anywhere that involves some form of human interaction.

Only solitude offers a respite from constant reminders that Plante’s Hermantown hockey team has finished second in the state hockey tournament six years in a row.

It’s become an endless loop of Charlie Brown charging toward the football, ready to kick it, only to see the ball yanked away at the last second.

Even Susan Lucci feels bad for these guys.

“I hear it every day, summer, winter, spring and fall,” Plante says. “Doesn’t matter where I go. I go to Walmart and some guy who’s 80 years old comes up to me and goes, ‘Gosh, when are you going to win that thing?’ I can’t get away from it. The only place I can get away from it is if I get in my boat and go fishing, or in the duck blind.”

Hermantown is back for a seventh time, advancing to Saturday’s championship with a 7-1 victory over St. Paul Academy.

The top-seeded Hawks face No. 2 seed Breck in a rematch of the 2010 championship game that started Hermantown’s run of being a bridesmaid.

“I couldn’t tell you what order they’re in,” he says. “I haven’t watched one tape of one state tournament game yet. I know the outcome.”

Hermantown won the state title in 2007, which Plante recognizes by wearing his championship ring on his right hand. He removes it to shake hands with the other team after games because, he notes, kids have strong grips these days and it feels like his fingers are being crushed.

The Hawks have had their spirits crushed during this Sorrowful Six streak. They’ve lost to both private and public schools. Four of the losses have been by one goal, one coming in overtime, one in the final 10 seconds of regulation.

“We’ve had some heartbreakers,” Plante says.

He used to avoid talking about the streak with his players, not wanting to create any more pressure or acknowledge that giant elephant sitting in the corner of their locker room.

“Heck with it, I’m going to try something different,” he says.

“That we’ve got to get this six-game thing off our back,” he says. “We’ve got to get rid of it. It’s getting too damn heavy. It’s heavy for me, I’ll tell you.”

This might be the team that sheds that emotional cargo. The Hawks are remarkably fast and deep, maybe the deepest collection of scorers and defensemen in Plante’s 27 years on the bench.

Senior Cole Koepke has scored 39 goals this season, including four in the quarterfinals against Litchfield. Defenseman Wyatt Aamodt is a Mr. Hockey finalist. Goalie Luke Olson gobbles up pucks with a .940 save percentage.

The Hawks certainly are good enough to win it. Of course, some of their predecessors felt that way, too.

“I think we’re all aware of [the streak],” Koepke said. “We’re all excited to play and hopefully get that off our backs.”

The Hawks’ run of runner-up finishes has fueled a strange mix of sympathy and resentment. Apparently not everyone is rooting for a different outcome.

“I get e-mails from people who want to see us keep losing and see this streak keep going,” Plante says. “I’m sure there are people opposite of that, but I don’t hear from them.”

Plante has ruffled feathers — and made state high school league officials cringe — over the years with his rants against private schools and recruiting practices.

Whether you agree or disagree with him, he’s never hid the rawness of his emotions after painful losses. He’s a true character that way, unvarnished in his opinions, says however he feels, usually drawing laughs in his news conferences.

One wonders if Plante, who has 513 career victories, will retire if the championship game losing streak ends Saturday. He says he takes coaching year-by-year now.

The streak has to end sometime, right?