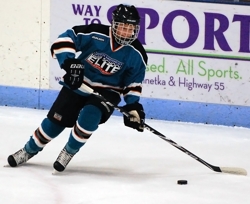 The Upper Midwest High School Elite Hockey League can be intimidating even for battle-hardened seniors.

Imagine how it has been for Jake Guentzel, a 5-foot-6, 135-pound sophomore enrolled at Hill-Murray.

“It was tough at first,” Guentzel said. “The league below (Minnesota Elite Prep Development League) is good, but this league is much faster. Everyone is stronger than me, so I just need to work harder than them.”

That hard work has been paying off – especially recently as Guentzel contributed two goals during league-leading Team Northwest’s 6-2 victory over Team Southwest on Tuesday, Oct. 19, at New Hope Ice Arena in New Hope.

“We had a good game,” Guentzel said. “Second period was our best. We came out good and everyone was working, we were making plays, it was a great game.

“I happened to have two goals on great plays by my linemates Tony (Cameranesi) and Christian (Horn). They’re great players and fed me good.”

In 13 games since being called up from the Elite Development League, Guentzel has registered 10 points – 5 goals and 5 assists. Not too shabby for a sophomore.

Guentzel is one of three sophomores in the Team Northwest lineup, joining T.J. Roo of Totino-Grace and Grant Besse of Benilde-St. Margaret’s.

“We’re the young guys,” Guentzel said. “The older guys give us some crap, but it’s working out fine. They’re all good to us.”

Guentzel has been playing on a line with Benilde-St. Margaret’s junior Christian Horn and Wayzata senior – and future University of Minnesota-Duluth Bulldog – Tony Cameranesi, the Elite League leader in points with 31 points (15 goals, 16 assists).

“He’s really good,” Guentzel said about Cameranesi. “He’s fast. Just get him the puck and he’ll get it back to you or he’ll score because he’s got a nice shot.”

With or without help, hockey seems to be in Guentzel’s future. Few players can match his bloodlines.

Guentzel’s oldest brother, Ryan, is a senior at the University of Notre Dame. Another brother, Gabe, is a junior and an assistant captain for Colorado College. Both brothers spent time in the USHL with the Sioux City Stampede.

“I’m kind of thinking about following Gabe out to Colorado, but I’m just playing it out and enjoying high school,” Jake Guentzel said about his future. 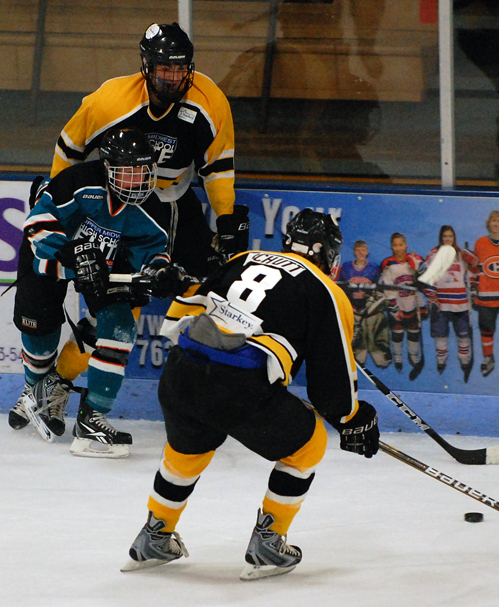 1. Grant Besse, Team Northwest
The Benilde-St. Margaret’s sophomore ignited a four-goal second-period flurry with what proved to be the winning goal on a one-timer from the right face-off circle and scored again less than three minutes later. He now has 20 points in 19 Elite League games to tie for 10th on the league scoring list.

2. Anders Franke, Team Northwest
Franke, a junior from Elk River, stopped 47 of 49 shots, including 21 in the third period as Team Southwest tried to climb back into the game.

3. Ryan Bullock, Team Southwest
A senior defenseman from Blake, Bullock registered an assist and was superb all game at both clearing the puck from the defensive zone and generating offense from the blueline.

Not bad for a rookie: Grant Opperman 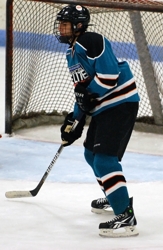 “Waiting by the phone” no longer works as a way to describe someone anxiously anticipating a call. So let’s just say Grant Opperman has been keeping his cell fully charged and within fingertips’ reach for the past several weeks.

“ ‘Maybe, maybe,’ ” Opperman said with a laugh about how he’s been approaching incoming calls. “Or, ‘Hopefully tomorrow.’ ”

Tomorrow finally came on Tuesday, Oct. 19, for Opperman, a junior forward from Breck who got the call to suit up for Team Northwest of the Upper Midwest High School Elite Hockey League.

Opperman, who ranks fifth in the Minnesota Elite Prep Development League with 23 points and second in goals with 15, had a goal and an assist for league-leading Team Northwest in its 6-2 triumph over Team Southwest at New Hope Ice Arena in New Hope.

“After playing basically the whole season in the Elite D league, I come up and get to try to help (Team Northwest) win the Elite League,” Opperman said. “It’s just nice to contribute to that and come up at a time like that.”

Opperman might be new to the Elite League, but he was no stranger to many of his teammates. He played youth hockey in Wayzata, and, as a Bantam A, Opperman joined Grant Besse and Mario Lucia on a dominant line on a state championships team.

“Mario is one of my best friends,” Opperman said. “And I love playing with Besse. “I know with Besse, if you give him the puck he’s going to put it in the net.”

Besse, who plays for Benilide-St. Margaret’s did, indeed, have two goals in the Team Northwest victory. Lucia, a junior at Wayzata, did not play. For the past several weeks he has been skating for the U.S. national under-18 team.

Last winter, Opperman scored 24 points (eight goals, 16 assists) in 30 games as Breck won its second straight Class A title. That team graduated 12 seniors, and junior forward Wes Iverson is the only Mustangs player that made an Elite League roster.

“We get a lot of talk in school like, ‘Oh, you guys won’t be that good this year. No three-peat or anything like that,’ ” Operman said. “We’ve got a chip on our shoulder a little bit because of that. I think we will be a bit of sleeper this year.” 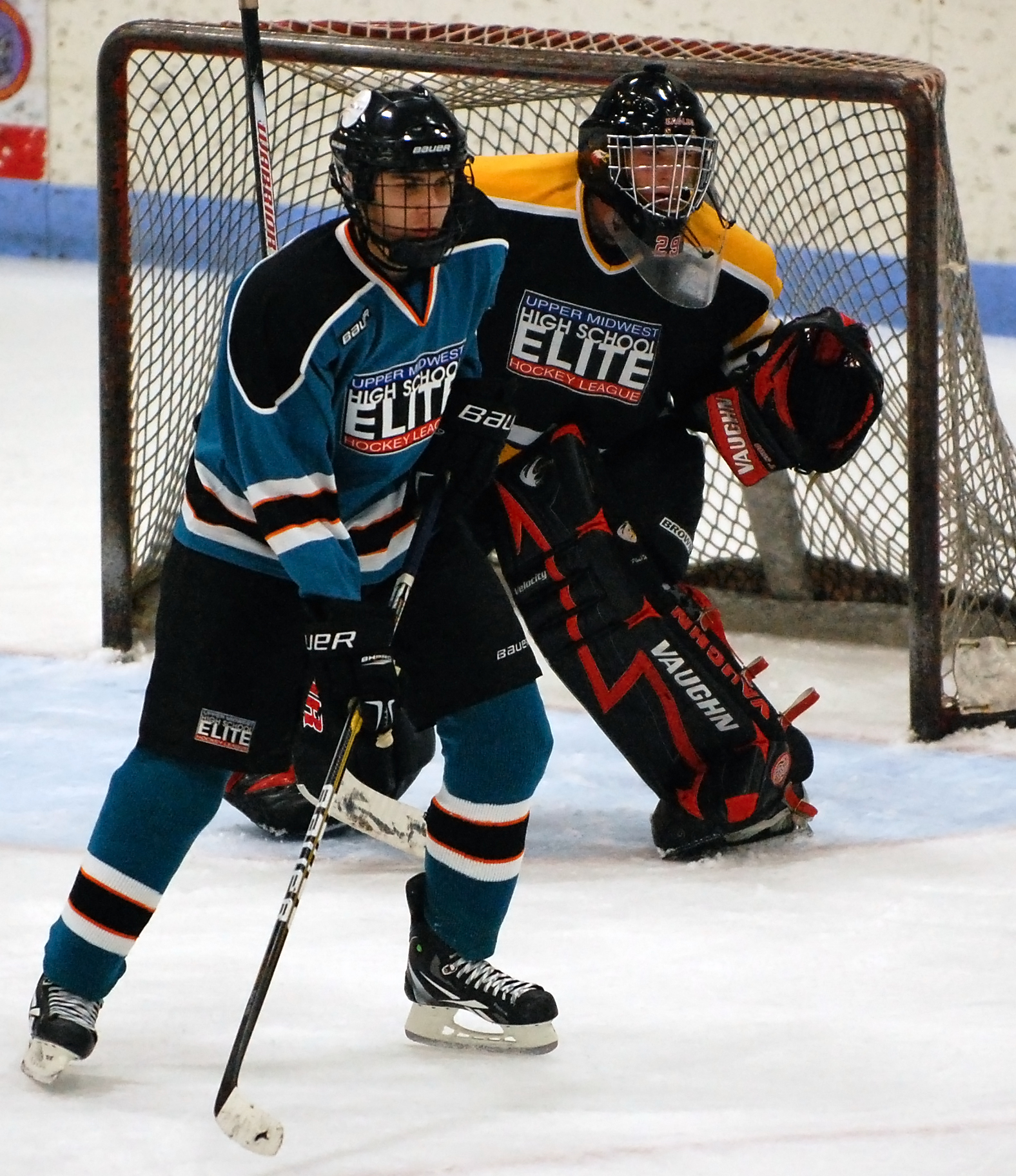 Scouts from 15 NHL teams, five Division I colleges and four USHL teams were in attendance at New Hope Ice Arena in New Hope on Tuesday, Oct. 19, for the Elite League matchup between Team Southwest and Team Northwest.

Scouts are asked to put their name and organization on a sign-in sheet at Elite League games.

These NHL teams were represented:

Team Northwest scored four goals in a 3 minute, 25 second span of the second period to rally from a one-goal deficit and cruise past Team Southwest 6-2 on Tuesday, Oct. 19, in an Upper Midwest High School Elite League game at New Hope Ice Arena in New Hope.

The victory gives first-place Team Northwest 25 points in the Elite League standings with two games to play. Team North and Team Wisconsin each have 21 points and are tied for second place with three league games left.

Besse started the binge at 8:12 of the second period and Opperman, making his Elite League debut, capped the outburst at 11:37.

Guentzel scored again in the second period with 0.3 seconds left on the clock to give Team Northwest (12-6-1) a 5-1 lead.