Saxton Soley says he was sloppy. Could have played better, he said.

All Soley did in beating Team Northeast 8-3 on Saturday, Oct. 23, was stop 43 shots, including several that seemed physically impossible to perform.

When Soley wasn’t configuring himself as a pretzel, he was checking out the stands to see which family members and Eau Claire Memorial friends and teammates had dropped by Eau Claire’s Hobbs Municipal Ice Center to watch him play.

“It’s a lot better than traveling to Brainerd, that’s for sure,” Soley said about playing the Upper Midwest High School Elite Hockey League game in his hometown rink.

The victory extended what has been an impressive run for Soley, who has lost just one of his last nine starts. His .921 save percentage is third-best in the league, and his 3.20 save percentage ranks fourth. 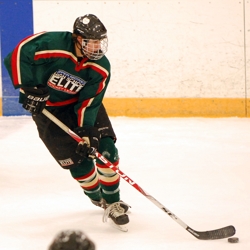 With hometown star Saxton Soley all but erecting a Plexiglass barrier in front of the Team Wisconsin goal, getting the puck past the Eau Claire Memorial senior proved to be an exceedingly difficult task for Team Northeast on Oct. 23.

While most Team Northeast players were shaking their heads in dismay after many of Soley’s out-of-nowhere stops in the 8-3 loss to Team Wisconsin at Hobbs Municipal Ice Center in Eau Claire, Centennial’s Riley Colvard somehow managed to break the Soley code.

Colvard has missed several of Team Northeast’s weekday games (Tuesday and Wednesday nights) because of football practice. He is a wide receiver for the Cougars.

“I’m trying to juggle both,” said Colvard, who scored 14 goals and tacked on 18 assists for Centennial last season. “It has been going pretty good. I’m hanging in there.

“A lot of early nights for me. I get to bed as early as I can so I can be as well rested as I can. “

Colvard, who said he hasn’t had football practice for two consecutive days, used his fresh legs to score on a 2-on-1 rush. Late in the same shift, he put a mesmerizing move on a Team Wisconsin defender but was unable to finish the play.

“I’m not much of a dangler,” Colvard said, “but I try to pull something out every once in a while. And then I ended up missing the net.” 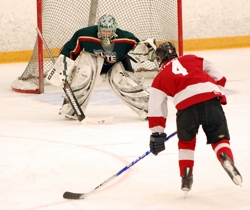 1. Garret Clement, Team Wisconsin
The senior from Wausau West, one of the teams favored to win the Wisconsin high school state title this season, put himself in scoring positions all game. He finished two of his chances with authority, ripping the puck into partially open nets and rocketed another shot off the crossbar – all in the pivotal second period.

2. Saxton Soley, Team Wisconsin
The senior goaltender from Eau Claire Memorial turned in a performance worthy of his newly refurbished home rink by stopping 42 shots. Some of Soley’s saves were made, literally, by the seat of his pants as he routinely threw every piece of gear he had at the puck.

3. Riley Colvard, Team Northeast
The lanky senior forward from Centennial, who also has been playing football this fall, was one of the few Team Northeast players to solve Soley. One of his goals came on a 2-on-1 during which he elected to shoot and snuck a hard, low shot into the net.

Garret Clemment of Wausau West and Brett Skibba of Middleton each scored twice, and goaltender Saxton Soley of Eau Claire Memorial, playing in his home rink, made 42 saves to lead Team Wisconsin to an 8-3 victory over Team Northeast on Saturday, Oct. 23, in an Upper Midwest High School Elite Hockey League game at Hobbs Municipal Ice Center in Eau Claire, Wis.

Clement scored consecutive goals during a span of 3 minutes, 43 seconds early in the second period as Team Wisconsin (11-7-1) turned a 2-1 first-period lead into a 4-1 advantage.

Riley Colvard of Centennial scored twice for Team Northeast (4-15-1), which was trying to play the role of spoiler as Team Wisconsin makes a final push to pass league-leading Team Northwest for the Elite League’s regular season title.

Colvard’s second goal came early in the third period and pulled Team Northeast to within 5-3, but Team Wisconsin responded with goals by Skibba, Ryan Dau of Hudson and Simon Leahy of Milwaukee University School.

Blake Cates of Stillwater started in goal for Team Northeast and stopped 10 of 14 shots before giving way to Tim Shaughnessy. The Hill-Murray senior finished with 25 saves on 29 shots.