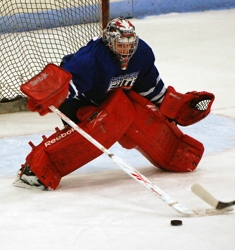 Goaltender Bryan Nies was out of breath when he stepped off the ice after his Great Plains team upset top-seeded Team North 2-1 in the Upper Midwest High School Elite Hockey League playoffs on Saturday, Oct. 30.

Not only was he out of breath, but he seemed to be at a loss for words.

"I don't know, we just came out to play today," Nies said, in an attempt to explain the surprising result at New Hope Ice Arena in New Hope.

Nies, a junior from Grand Forks Red River (N.D.), made 36 saves on 37 shots. The best of those saves came late in the third period when Team North had pulled its goaltender, Alex Lyon of Lake of the Woods, for an extra skater.

A flurry of scraps and battles in front of the net made it seem inevitable that a loose puck would find its way home, but Nies stopped them all. 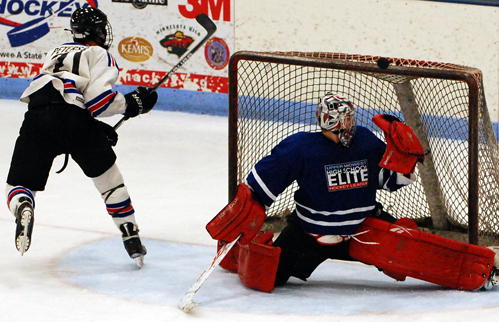 "My defense did their job and made it easy for me," he said. "Couldn't have done it without everyone in front of me."

Team North is the second higher seed to get upset in the winner's bracket of the Elite League playoffs -- the first being Team Northeast's upset of Team Northwest on Oct. 29. Team Northeast was led by stellar play from their goaltender Tim Shaughnessy of Hill-Murray.

"I felt really relaxed out there, and everything felt good," he said. "Just one of those days where everything went nice for me."

Not even Nies could believe that his team -- a team that went 8-12-1 during the regular season and was the eight-team playoff tournament's No. 5 seed -- would be playing in the championship.

"No, I didn't really think we would be playing (in the championship). Pretty big upset, but I guess anything is possible in this league. All the teams and players in this league are good enough, so it's just whoever can string together the best game."

Regardless of the result tomorrow, Nies will have excellent experience to bring back home after the Elite League wraps up.

"Being from North Dakota, it will be different and a little bit slower pace," Nies said. "Hopefully I can bring back some of the success I've had here for the regular season."

1. Shane Omdahl, Great Plains
It's critical to take advantage of your opponent's mistakes, especially when your opponent is the top seed in the Elite League playoffs. Omdahl, a senior from Roseau, did just that by stealing a clearing attempt and sending it to the back of a virtually empty net. Omdahl also assisted on fellow Roseau teammate John Erickson's game-winning power-play goal.

2. Bryan Nies, Great Plains
Nies, a junior from Grand Forks Red River (N.D.), stopped 36 out of the 37 shots that were sent his way, with several of those shots coming from multiple scrums in front of the net late in the third period after Team North had pulled its goaltender in favor of an extra skater.

3. Josh Erickson, Great Plains
The junior from Roseau played hard all game and his first-period power-play goal ended up being the game winner. 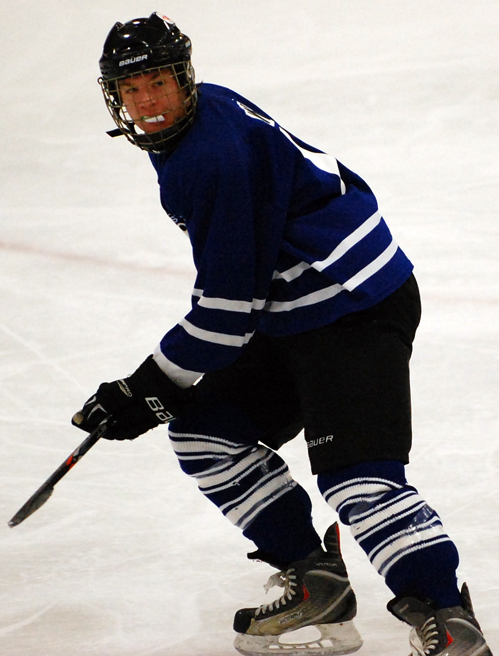 Team North, which shared the regular season league title with Team Northwest, spent 24 minutes in the penalty box and could not come back from an early two-goal deficit against Great Plains on Saturday, Oct. 30at New Hope Ice Arena in New Hope.

In the first period, Great Plains forward Shane Omdahl of Roseau stole a clearing attempt and sent it to the back of a virtually empty net.