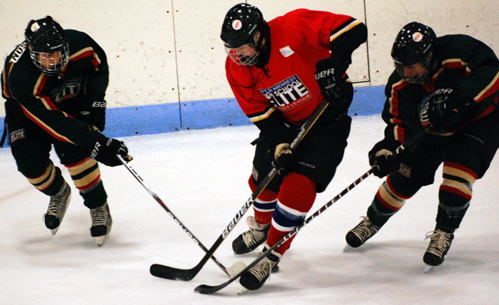 1. Eric Freschi, Team Northeast
The senior from Bloomington Jefferson was like a man possessed playing in a game the night before Halloween. Freschi was stellar at both ends of the ice and his third period goal ended up being the game winner.

2. Robert Kinne, Team Southeast
Kinne, a senior at Cretin-Derham Hall, had himself a game against Team Northeast. His two goals kept any momentum alive for Team Southeast and almost led them to a comeback.

3. Blake Cates, Team Northeast
The night before this game Cates, a junior from Stillwater, watched his teammate and fellow goaltender Tim Shaughnessy record a 30 save shutout against Team Northwest. But tonight would be all about him. Cates played phenomenal and held the mighty offense of Team Southeast - a team that scored 10 goals the game before against Team Southwest - to three goals. Mix in his 29 saves and list Cates as the game-winning goalie. 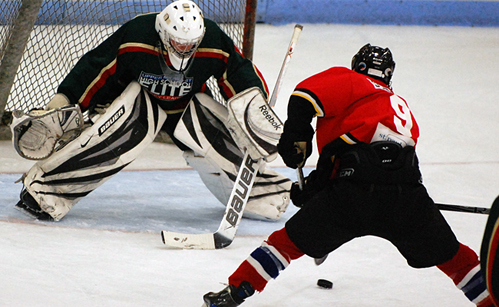 Goals by Jake Sampson of Edina and Eric Freschi of Bloomington Jefferson early in the third period gave Team Northeast a three-goal advantage and Zac McCarver of North St. Paul added an empty-net goal as it held on to beat Team Southeast 5-3 on Saturday, Oct. 30, for its second upset victory in as many Upper Midwest High School Elite Hockey League playoff games at New Hope Ice Arena in New Hope.

Team Northeast, the No. 7 seed in the eight-team tournament, plays No. 5 seed Great Plains for the Elite League playoff championship on Sunday, Oct. 31, at 1:15 p.m. at New Hope.

Team Southeast opened the scoring as Bob Kinne of Cretin-Derham Hall converted a pass from Zach Schroeder of St. Thomas Academy after Schroeder had a breakaway opportunity. Apple Valley's Hudson Fasching also assisted on the goal.

Team Northeast would also capitalize on a second period power-play opportunity to pull ahead 2-1 -- a lead that they would hold going into the third period. Hill-Murray's Ben Bahe scored the power-play goal with assists from White Bear Lake's Max Birkinbine and Stillwater's Cody Corbett.

A poor clearing attempt helped Team Southeast cut into the deficit as Kinne buried a pass from Fasching to make it 4-2. Team Northeast was then called for too many men and Justin Kloos of Lakeville South scored a pretty goal to make it 4-3.

Team Northeast goaltender Blake Cates of Stillwater made 29 saves after watching Tim Shaughnessy of Hill-Murray, his teammate and fellow goaltender, record a shutout the night before in a stunning victory over No. 2 seed Team Northwest.