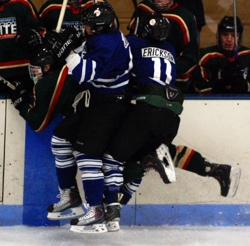 Great Plains forwards Josh Erickson of Roseau, right, and Luke Johnson, of Grand Forks Central catch some air as they put a hit on a Team Northeast player. Photo by Helen Nelson

Populations are plummetting in many rural Minnesota towns, but the needle that registers northern pride -- especially when it comes to playing hockey -- remains redlined.

Which is to say that gritty, hard-hitting, get-in-your-face style of play is as popular and effective as ever.

For proof, just check out the regular season standings of this year’s Upper Midwest High School Elite Hockey League. Team North, featuring players from Lake of the Woods to Grand Rapids to Duluth and all points in between, shared the league’s regular season title.

And finishing off the sweep of the league’s championships was Great Plains, which captured the playoff title in dramatic fashion on Sunday, Oct. 31 at New Hope Ice Arena in New Hope.

Those who think the state’s north-south rivalry has gone the way of one-class state tournaments should have been sitting in the Great Plains locker room before the start of its eventual 7-5 triumph over Team Northeast.

“It was kind of nice; the North coach came in before the game and he said keep her (the league playoff championship) up North,” Great Plains forward Nick Stoskopf, a senior from Warroad, said about the appearance from Team North coach Pat Guyer, a Coleraine native. “That helped a little bit.”

Stoskopf scored two goals, as did linemate Josh Erickson, a junior from Roseau. In all, Warroad and Roseau players accounted for six of Great Plains’ seven goals.

“We did pretty good today,” said Roseau senior Shane Omdahl, who scored an empty net goal from center ice in the closing seconds.

Erickson, in particular, was a standout. His two goals came off laser beams aimed into the upper, upper regions of the net.

“He’s one of the players who should have been on that list,” Stoskopf said in praise of Erickson, who was not one of the Great Plains players selected for the season-ending Bauer National Invitational Tournament. “He plays hard for his size. He plays like he is 200 pounds. You know he’ll be playing hard trying to get on that list next year.”

No. 5 seed Great Plains won, in large part, by holding No. 7 seed Team Northeast scoreless on a whopping nine power-play opportunities. Three of those were extended 5-on-3 advantages.

“We play rough hockey up north, and the refs don’t take that into consideration around here,” Stoskopf said. “It’s a whole different style. Our coach praises grit in the locker room, and some coaches praise finesse. You got to get out there and bang the guys, and then you can play with some finesse. ”

Fierce rivals during the high school season, the Warroad and Roseau players have spent the better part of the fall jokingly trying to convince the two groups to join forces for the winter. Of course, the biggest point of contention is for which town they would all play.

“I’m trying to get (Erickson and Omdahl)  to move to Warroad but they don’t like that idea,” Stoskopf said with a grin. “They’ve asked that about us (Warroad defenseman Carson Gray also plays for Great Plains) a couple of times.

“But I like playing for the black and gold. ” 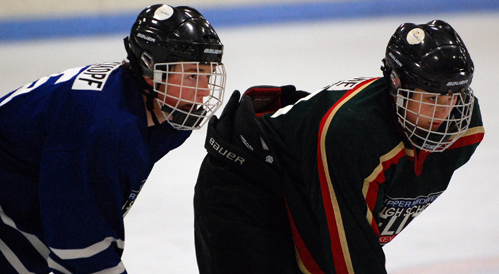 1. Josh Erickson, Great Plains
The 5-foot-8¼ junior from Roseau played his typical speedy, gritty, irritating (and effective) game, but also showed a sniper’s touch with his two goals that were rockets into the upper reaches of the net.

2. Nick Stoskopf, Great Plains
The 6-foot, 191-pound senior winger plays a style not that different from Erickson, except Stoskopf can throw a few extra pounds into his bone rattling hits. When he wasn’t drilling Team Northeast players into the boards, Stoskopf found time to score two goals.

3. Brandon Wahlin, Team Northeast
The White Bear Lake senior was a wizard on faceoffs and whirlwind in open ice, and he finished with a goal and two assists while playing on an effective line that included high school season arch rival Zach LaValle of Hill-Murray.

In Sunday’s championship victory over Team Northeast, regulars such as Crookston’s Mark Bittner, Red Lake Falls’ Garrett Schmitz, East Grand Forks’ Gage Ausmus, Moorhead’s Eric Brenk all were out of the lineup because of injury or football commitments.

Josh Erickson of Roseau scored twice, and his goal with 2 minutes, 37 seconds remaining proved to be the game winner in Great Plains’ 7-5 victory over Team Northeast on Sunday, Oct. 31, in the championship game of the Upper Midwest High School Elite Hockey League at New Hope Ice Arena in New Hope.

A wild final minute included two more goals, one by Team Northeast’s Eric Freschi of Bloomington Jefferson with 18 seconds left and Shaughnessy pulled in favor of an extra skater.

John Simonson of Grand Forks Central scored a shorthanded goal early in the third period to put Great Plains ahead 4-3.

Shaughnessy made 21 saves while Great Plains goaltender Michael Bitzer of Moorhead had 34 saves, including 16 in the third period.