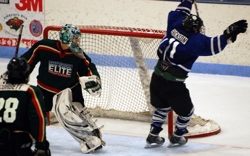 Both the balance and the depth of talent in the Upper Midwest High School Elite Hockey League was on display Oct. 29-31 as Team Great Plains – a sixth-place finisher in the regular season – ran off three wins to capture the league’s playoff championship at New Hope Ice Arena in New Hope.

Great Plains finished its remarkable run on Sunday, Oct. 31, with a 7-5 win over Team Northeast, a team that also had made an improbable charge to the championship game as the No. 7 seed in the eight-team tournament.

“This was a great championship game, and a tremendous win for Team Great Plains,” Elite League founder and commissioner John Russo said. “It shows how much talent there is in this league, and what any group of players can accomplish when they play as a team.”

Here’s how Great Plains’ run to the championship unfolded:

Goalie Tim Shaughnessy of Hill-Murray stopped all 30 shots in earning his first Elite League shutout. His Team Northeast teammates came out fast, getting goals from Wayzata’s Miles Death, White Bear Lake’s Max Birkinbine and Centennial’s Joey Hess in the first period. From there, Shaughnessy kept Team Northwest at bay until Spring Lake Park’s Nick Turbitt scored in the third period to nail down the win.

Team North 7, Omaha Jr. Lancers 1
Grand Rapids’ Patrick Moore scored the first of his two goals as part of a four-goal, first-period barrage as Team North – the league’s other regular season co-champ – blew past Omaha. Goalie Dom DeGuiseppi of Grand Rapids made 32 saves and Travis Underwood, yet another Grand Rapids product, had a goal and three assists for North.

Great Plains 2, Team North 1
Great Plains knocked out the league’s other co-champ as goaltender Nies had another great game between the pipes, stopping 35 of 36 shots to send his team to the finals. Nies, a junior, was staked to a 2-0 lead by teammates Shane Omdahl and Josh Erickson, both of Roseau, in the first period.  Nies didn’t allow a goal until Garrett Skrbich of Hermantown drew North within one midway through the third period.

FINALS
Great Plains 7, Team Northeast 5
On Halloween, the title game turned into a wild and crazy affair, with the scoring initiated by Great Plains’ Nick Stoskopf of Warroad just 53 seconds into the opening period.

Less than 7 minutes later, Team Northeast’s Miles Death of Wayzata ripped a slapshot from the point to tie the game at 1-1.

Stoskopf’s second goal of the game, and a tally five minutes later by Roseau’s Josh Erickson, gave Great Plains a 3-1 lead, but Centennial’s Riley Colvard scored for Northeast at 17:59, setting the stage for a frantic finish.

First, Brandon Wahlin of White Bear Lake scored for Team Northwest just 59 seconds into the third period, tying the game at 3. Northwest then went on the power play, but Great Plains’ John Simonson of Grand Forks Central (N.D.) scored a short-handed goal to put his team back on top. That lead lasted less than four minutes, until Centennial’s Joey Hess knotted the game at 4.

Carson Gray of Warroad put Great Plains ahead for good at 10:03, and things looked secure when Erickson scored his second at 17:23 for a 6-4 Great Plains lead. But with the goalie pulled, Bloomington Jefferson’s Eric Freschi scored with 18 seconds remaining to cut the lead to 6-5. Off the ensuing faceoff, Shane Omdahl knocked the puck into an empty net, scoring just three second after Freschi and providing the final 7-5 margin. 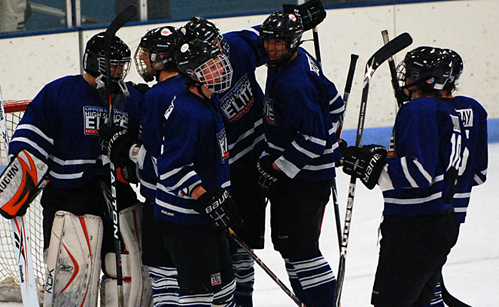