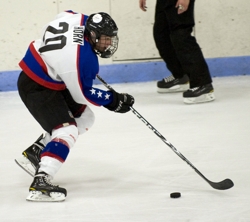 Christian Horn was in good position. He was open. He had the puck. He went to shoot.

Horn, a Benilde-St. Margaret’s junior, got enough of his stick on enough of the puck to get it moving just fast enough to get it over the goal line.

Horn’s overtime goal lifted Minnesota White to a 5-4 victory over Shattuck-St. Mary’s on Sunday, Nov. 7, in the championship game of the Bauer National Invitational Tournament at New Hope Ice Arena in New Hope.

"He definitely came through for us," Minnesota White goaltender Charlie Lindgren of Lakeville North said about Horn. "He’s a great player. I’m guessing he is going to put up big numbers for (Benilde-St. Margaret's)."

While Horn will insist he got lucky on the play that sparked an on-ice mosh pit along the boards – with Horn at the center of all the mayhem – his body of work in the tournament indicates his goal wasn’t just the byproduct of a haphazard swipe at the puck.

Horn scored four goals in three tournament games, including two in Minnesota White’s 3-1 triumph over Minnesota Red in Saturday’s semifinals. And with the tournament’s sudden-death overtime rules set for 4-on-4 play for the first 10 minute period and 3-on-3 for the second 10-minute session (if required), the smooth-skating Horn definitely was in his element.

“I love it, it’s so much fun,” Horn said about the 4-on-4 format. “There’s just a lot of open ice. There’s just more flow to the game, it’s more of a chance to show off your skills and show them what you can do in overtime.

Max Birkinbine of White Bear Lake and Jake Sampson of Edina were the first set of forwards to hit the ice in overtime for Minnesota White, and then came Horn and Hill-Murray’s Ben Bahe.

And then came Horn’s “shot.”

“(The puck) went straight to like the post, and then I guess it moved toward the goal line, and then either their goalie and one of their players kind of hit the top of the puck and it just slid in," said Horn, who was ranked the state's No. 2 sophomore by the Hockey Hub at the conclusion of last season. “You take them as you get them, that’s for sure.”

Horn walked out of the locker room not only with his trademark smile, but he also headed for home with the game puck. Oh, and the distinction of being a national champion.

1. Christian Horn, Minnesota White
All Horn did was score the game-winner, in overtime, to secure a national title. Yeah, you could say he was star worthy. Horn, a Benilde-St. Margaret’s junior, also had an assist on Hudson Fasching’s first-period goal, but in this game, really, the last goal was the one the that mattered.

2. Charlie Lindgren, Minnesota White
The junior from Lakeville North was superb in the final stages of the third period and again in the early seconds of overtime when Shattuck-St. Mary’s unloaded shot after shot with Gatling gun frequency. He finished with 44 saves.

Yeah, that one hurt, the Lakeville North junior confirmed after his Minnesota White team beat Shattuck-St. Mary’s 5-4 in overtime in the championship game of the Bauer National Invitational Tournament.

Winning never hurt so good for Lindgren, who made 44 saves in the victory. The most dramatic, and clutch, of those saves came in the closing minutes of regulation when he was pelted with high-velocity rubber.

It’s been that kind of year for the lanky goaltender, who went from relatively unknown sophomore trying to make an impression at Lakeville North captain’s practices to (take a deep breath here): playing in the state Class AA tournament, representing Minnesota -- he was the lone state goaltender selected -- in the USA Hockey National Player Development camp in Rochester, N.Y. in July, playing for Team Southeast in the Upper Midwest High School Elite Hockey League and playing for Minnesota White in the NIT.

“Geez, this whole 2010 has been great,” Lindgren said. “Going to the state tournament, going to Rochester (N.Y.), going to the Elite League. It’s the greatest thing in the world. 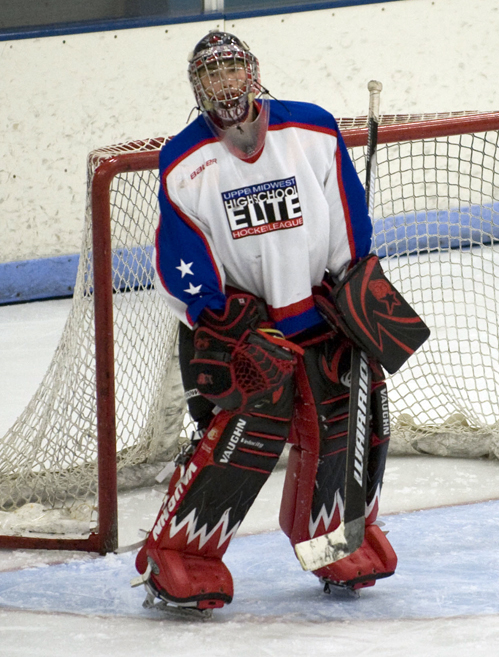 Four No. 1 Lines, No bad choices

While any line that includes senior Tony Cameranesi of Wayzata, the Elite League’s scoring leader this fall, figures to be a No. 1 unit, there was no shortage of “top” lines for Minnesota White.

Cameranesi centered a unit that included Zach Schroeder of St. Thomas Academy and Jonny Brodzinski of Blaine, and Brodzinski registered a goal.

In overtime the teams played 4-on-4, and Minnesota White coach Chris McAlpine said with so many talented forwards on his roster he simply had to call names, any names, to get combinations he was comfortable with.

“It was kind of nice for me because they are all skilled players,” McAlpine said. “I couldn’t send out a bad combo. They were all working hard, doing everything, so it was pretty easy.” 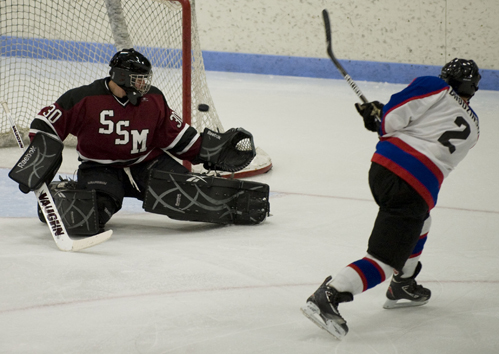 Christian Horn, a junior from Benilde-St. Margaret’s, scored 76 seconds into overtime to lift Minnesota White to a 5-4 triumph over Shattuck-St. Mary’s on Sunday, Nov. 7, in the championship game of the Bauer National Invitational Tournament at New Hope Ice Arena in New Hope.

Ryan Bullock, a senior defenseman from Blake, started the winning play by rushing the puck into the Shattuck-St. Mary’s zone and feeding Horn in front of the net. Horn partially fanned on his shot but the puck trickled over the goal line and into the back of the net.

The referee’s goal signal sparked a wild celebration along the boards and against the glass to the left of the Shattuck-St. Mary’s goal, where Horn was mobbed by teammates.

Zach Stepan of Shattuck-St. Mary’s forced the overtime by banging home a rebound with 4:02 left in the third period.

Shattuck-St. Mary’s applied heavy pressure on Minnesota White goaltender Charlie Lindgren, a junior from Lakeville North, during the closing stages of the third period and again in the opening seconds of the overtime before Horn scored the dramatic goal.

The teams played 4-on-4 in the overtime per tournament rules, and Horn was paired with Hill-Murray senior Ben Bahe.

Stepan scored two goals and Ben Greiner and Tanner Sorensen each had one for Shattuck-St. Mary’s, which has reached the title game of the NIT each of the last four years and has won the championship once, in 2008.

Lindgren finished with 33 saves while Peter Traber had 49 for Shattuck-St. Mary’s.