New Bemidji arena 'blowing them away' 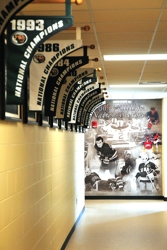 Bemidji State University players pass through a "hallway of champions" as they walk from their locker room to the rink at the new Sanford Center. <br />Photo by Tim Kolehmainen

The spectacular lakeshore setting, the custom-designed Terrazzo floors, the NHL-style locker room –- all of it screams planning and execution and attention to the smallest of details.

Heck, a $35 million arena springs out of the northwoods, and even local bald eagles are impressed.

Visitors to the Sanford Center (originally called the Bemidji Regional Events Center) can see the majestic birds –- two or three or more perched high in a favorite tree, just a stone’s throw from the sparkling new building on the south shore of Lake Bemidji –- pretty much any day of the week. No appointment necessary.

Roseau standouts Shane Omdahl, a senior, and Josh Erickson, a junior, have toured the new facility. So have Benilde-St. Margaret’s senior all-state candidates Pat Daly and Pat Steinhauser. Apple Valley junior A.J. Michaelson also made the trip north on a recruiting visit before eventually committing to the University of Minnesota.

All have returned home with glowing reviews.

“We actually got a tour before it even opened,” said Omdahl, a Hockey Hub preseason all-state selection “We went into the locker room, and we actually picked out where the TV was supposed to be.

“That’s amazing down there by the locker rooms, the paintings and everything they have on the walls.”

Omdahl was referring to the “Tradition never graduates” theme that is carried through by the huge graphics of past players displayed on the walls in the hallways leading from the locker room to the rink.

“I think every kid that has come here, it has exceeded their expectations,” Beavers coach Tom Serratore said.

With their new facility and entry into the Western Collegiate Hockey Association starting this season, the Beavers no longer are a bit player in the state’s recruiting wars. 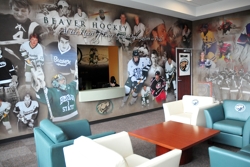 Visitors to the hockey offices at the new Sanford Center in Bemidji are greeted by murals showing some of the greatest players in Bemidji State's hockey history. Photo by Tim Kolehmainen

“It’s not that Bemidji has just discovered hockey, but again they are at a different level now.”

As part of the Minnesota Hockey Coaches Association annual fall clinic held at the Sanford Center in late October, more than 100 of the state’s boys hockey coaches had the opportunity to tour the new facility and watch the Beavers play the University of Minnesota-Duluth.

The fall coaches clinic traditionally has been closely associated with state college hockey. Last year, the clinic was held in Mankato in conjunction with a Mavericks’ series against the University of Wisconsin. Coaches from both teams gave presentations as part of the clinic’s agenda.

In Bemidji, Serratore and his staff gave presentations as did UMD’s coaching staff, led by Scott Sandelin. Serratore played high school hockey for Greenway in Coleraine, while Sandelin is a former Hibbing star.

MacMillan said the hope is to have next year’s fall clinic in Duluth, where the Bulldogs’ new home, Amsoil Arena, is opening this year.

“We’ve always done it working with the WCHA schedule,” MacMillan said. “We always hold it the weekend after (the Education Minnesota Professional Conference held annually the third Thursday and Friday in October). Sometimes we are at the beck and call of the school. We have a great relationship with the college coaches.”

Three Bemidji High School games will be played at the Sanford Center this season – Dec. 16 against Thief River Falls, Jan. 13 against East Grand Forks and Feb. 11 against Warroad.

“We wanted our own kids to be able to play in a building like this and a facility like this,” Serratore said. “And even for the parents and the fans and even for the high school students to come here. This is such a great place to watch a game.”

Of course, those games can only help the Beavers’ recruiting efforts.

“You are exposing this facility to other teams in the region, and that’s important, too,” Serratore said, “because word does spread. It’s getting people up here to see this facility.

“Once they get up here, they are blown away.” 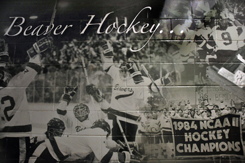