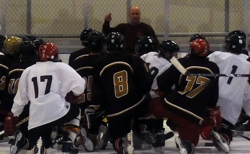 Duluth Central red and Duluth Denfeld maroon have proven to be complimentary colors during the initial stages of the merger between the two programs. Photo by Jordan Doffing

Some of Duluth’s 84,000 residents have spent the better half of the last decade arguing about the eventual closing of one of the town’s three public high schools.

The “Red Plan” eventually was chosen by voters, which meant, among other changes, the Duluth Central and Denfeld high schools would merge into one.

The merger meant lost jobs and jammed classrooms and hallways, and it also forced many two- and three-sport athletes to face the possibility of getting significantly less playing time or being cut from a team altogether.

Almost all of the players from the two high school programs have skated together on one youth team or another, with most coming out of the Duluth Lakers’ association. When it came time to attend high school, some players went to Denfeld and the others went to Central.

Now, with the merging of the two schools, many of the players have been reunited.

Last season Central went 15-10-1 and was knocked out in the first round of the Section 5A playoffs at the hands of Duluth Marshall, a private school. Denfeld went 14-13-2 and lost a heartbreaker to Hermantown in the Section 5A championship game.

Now the two teams, coached by Kevin Smalley, will make a run for the state Class 1A title through Section 7A as one team, battling through the upheaval that came as part of the merger.

“The players are fine, the bigger issue is outside of athletics,” Smalley said of the school merger. “The reality is a school is closing and teachers are losing their jobs, and that’s their livelihood. I really feel for them.”

With Denfeld undergoing a major facelift, most students were sent to Central while some were shipped to Duluth’s third public high school, East. At Central, the class sizes are larger and the hallways are more cramped.

“It was hard the first few days because it’s really crowded up there, but it’s fun because I get to meet new people,” Kaspari said.

Teammate Mike Andrews feels the same way: “The first couple weeks at school were crazy,” he said. “The halls were packed, but the way everything’s worked out – it’s awesome.”

Andrews attended Central last year and has seen a vast improvement with the hockey program since the school merger.

“It’s unbelievable going from the program I was at last year to this program, it’s a big step up,” Andrews said. “We worked out together all summer, which was huge because I don’t think we could have bonded together better than we have.”

Sophomore goaltender Zach Thompson, ranked No. 1 on the Hockey Hub's list of the state's top freshmen at the conclusion of last season, keeps his eye on the puck as a Central player makes a move during a practice drill. Photo by Jordan Doffing

Most of the players skated together over the summer, and they participated in a tournament where they tasted some success – a good icebreaker for a group playing in a competitive game setting together for the first time since youth hockey.

“We went down to Buffalo and won all three games,” Kaspari said. “It was the first time we all played together, and we were moving the puck well. It helped that we all knew each other from youth hockey.”

Smalley agreed the summer workouts and games were important in terms of bringing the players together and allowing them to adjust to the unusual circumstances.

“It was clear to me during our summer camp that this group was going to gel together nicely,” said Smalley, who was named the Class 1A Coach of the Year last season by the Minnesota Hockey Coaches Association. “I was surprised at how fast they molded together. This group has a good nucleus and they all have a winning attitude.”

Smalley, who did not have a losing record during his six seasons as the head coach at Denfeld, said, despite the merger, he hasn’t considered changing his style of coaching or his approach to students off of the ice.

“Each year our philosophy has stayed the same,” he said. “It’s not about a win-loss record, it’s about having a positive attitude.

“I’ve had a successful coaching staff to back me up, and we have an open door policy, which is good for the players.”

This fall, Central’s athletic teams have worn both the Trojan red of Central and Hunter maroon of Denfeld. One of the big questions surrounding the hockey team entering the season has been the color it would wear.

“The JV squad will wear both jerseys, it just depends on what they want to wear on a given night,” Smalley said. “For the varsity, we had to look to the future in respect to needing new equipment, so we took aspects that will proudly represent both schools.”

The players and coaching staff have high hopes and expectations for the season, and they have a tough schedule ahead of them. Central opens its season at 3 p.m. on Saturday, Nov. 27, against Roseville at Duluth’s Heritage Sports Center. Central plays crosstown rival Duluth East on Jan. 3.

“We’re all here to try and battle harder and earn our spot on the team, and we’re all working for that one goal to go to state,” Kaspari said. “We’ve all come together real well, and we just want to have a fun year.”