Little Falls turns back the clock 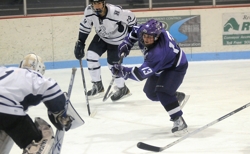 It felt like turn-back-the-clock day at the Hibbing Memorial Arena, as Little Falls rode a big scoring game from a Hanowski to a 6-1 victory over Hibbing/Chisholm in the season opener for both teams Friday, Nov. 26.

But this wasn’t 2008 and the height of the Flyers’ dynasty. This victory came a year after an eight-victory campaign that left the team disappointed and hungry for a new start.

“It was good for these kids to get off on a good note after a dismal season last year,” admitted Little Falls coach Tony Couture. “We’ve been chomping at the bit to get out and play.”

Junior Joey Hanowski, the Flyers' leading goal-scorer last winter with 16, kicked off his junior season with a career-best four goals, all scored deep in the Bluejackets' crease off goaltender Nathan Tromp.

Hanowski began the scoring at 9:55 of the first period with a tap-in of a loose puck, then netted the game-winner just 31 seconds into the second on another goal-mouth scramble.

Hanowski, the younger brother of former Flyers’ stars Beau and Ben Hanowski, called all four of his goals “garbage goals,” perhaps in deference to his older brothers. But they were certainly pretty for the Flyers.

“He’s got a knack around the net,” Couture said.

After a slow start, Couture switched up his team's forecheck at the first intermission, and it seemed to spark the Flyers.

Little Falls responded with three goals in the final five minutes of the second -- including two in the final minute -- to take an insurmountable 5-0 lead.

Adam Dougherty rocketed in a bad-angle shot with 4:50 left, Austin Bjorge scored from the high slot with 59 seconds remaining and Hanowski finished off the outburst with 2.7 seconds on the clock, tipping in a Mike Anez' shot from the point on a 5-on-3 advantage.

“It was a long bus ride, and guys finally found their legs,” Hanowski said. “We take pride in outworking everybody. We might not have the most skill, but we want to outwork everyone that we play.”

Added Couture: “I just told our kids to be very patient and work hard and things will happen.”

Couture admitted his teams – even during the Hanowski-Festler dynasty years – haven’t been fast starters.

Michael Stumpf finished with 33 saves on 34 shots for the Flyers, while Tromp made 27 saves on 33 shots for Hibbing. 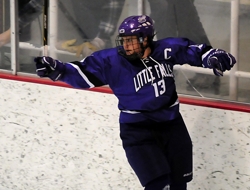 It can’t be easy living in the shadow of two older brothers who’ve broken nearly every school – and even state -- record in the books.

Beau was a high-scoring forward who led the state in scoring as a senior before moving on to play Divsion I baseball at South Dakota State. Ben was an even more prolific scorer, setting the all-time state scoring record with more than 400 career points. He’s now at St. Cloud State playing Division I hockey.

“(Joey) has handled it very well,” said Little Falls coach Tony Couture, who’s overseen the program during the brothers’ tenure. “He’s very proud of his brothers and what they did. He’s a great kid, and he’s very athletic, so he’s no slouch either. He does a lot for our school.”

Now it’s Joey’s turn to lead the Flyers. As a sophomore, he netted a team-best 16 goals after moving up to forward from the blue line, but Little Falls won just eight games. Joey began his junior season in style, tallying four goals in a 6-1 victory at Hibbing Friday, Nov. 26.

The youngest Hanowski has a different style than his high-flying older brothers. He’s not as big, nor as fast. Most of his damage comes through hard work.

“People call me the garbage goal guy. I don’t score any pretty goals,” laughed Hanowski, who described himself as a physical player who plays well within the system.

“Anybody that’s there could tap it in. I was just the guy tonight,” shrugged Hanowski. “It’s a lot of great team play and pretty goals because of hard work, not just one person.”

“He’s got a knack around that net. He’s not overly fast but he’s physical. He brings a lot of enthusiasm and excitement to our team,” said Couture. “He’s the type of kid who’s not shy in the locker room. He’s very vocal and sometimes that rubs people the wrong way. But that’s what you need in the locker room. Somebody who tells you what you don’t want to hear, but you need to hear.”

Joey isn’t the only Hanowski on the Little Falls roster. Senior defensemen Hunter Hanowski is a cousin to the higher-scoring side of the family and is a key contributor to the Flyers, according to Couture.

“It’s the same great family, and they bring a lot to the table, other than the hockey,” Couture said.

1. Joey Hanowski, Little Falls
Hanowski may have called them "garbage goals," but his four goals were a big spark for the Flyers in their 6-1 victory at Hibbing.  All four were tallied deep in the crease, showing his hands are on par with his high-scoring older brothers, Ben and Beau.

2. Michael Stumpf, Little Falls
Stumpf nearly earned a shutout, settling for 33 saves on 34 shots.  He was particularly active in the third period, when Hibbing ripped 18 shots his way, including the only goal.

3. Adam Dougherty, Little Falls
Despite being ill, Dougherty impressed in the season opener with a goal and two assists. The senior is a former scoring star in the Little Falls youth ranks. He missed much of last year with a concussion.