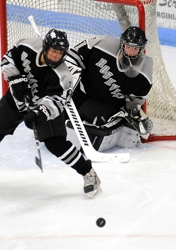 Roseville coach Jeff Pauletti admitted his team hadn't worked on its penalty kill during the first two weeks of practice this winter.

As it turns out, none was needed.

The Raiders killed off all seven Virginia/Mt. Iron-Buhl power plays -- including two extended 5-on-3 advantages -- to beat the Blue Devils 3-0 in the season opener for both teams Friday, Nov. 26 at the Virginia Miners' Memorial Building.

"What I saw out here is that we kept a lot of shots to the outside and took care of the front of net. And our goaltender played spectacularly for us,” said Pauletti, who credited 17 returning letterwinners with remembering the systems he set in place last winter.

It didn’t hurt to have senior goaltender Nick Lehr between the pipes, either.

Behind a stout defense that limited Virginia to just one shot per offensive flurry, Lehr made all 32 stops for the shutout victory. The senior -- and his defense -- were at their best in the second period when the Blue Devils ripped 16 shots on net.

With three straight penalties midway through the period, Roseville was shorthanded for nearly five minutes, including 1:11 of 5-on-3 play.

“I just tried to stay calm and keep it simple,” Lehr said.

Junior forward Michael Hughes had two goals for the Raiders, while Tom Bartel had two assists.  Hughes opened the scoring from the slot just over two minutes into the second period. His goal held up throughout numerous power-play chances for both teams.

Finally, defenseman Austin Colvard scored his first varsity goal on the power play with 3:44 remaining to give Roseville a 2-0 lead. Colvard floated a seeing-eye wrister low to the stick side of Virginia goaltender Andy Milbridge.

“To bury it on a power play was huge,” Pauletti said. “It got us going and got them dejected a bit.”

Hughes capped the scoring with an empty-net, short-handed goal.
Milbridge made 28 saves on 30 shots for the Blue Devils.

1. Nick Lehr, Roseville
The Roseville senior netminder was in position all game long, stopping all 32 shots the powerful Virginia offense sent his way. Lehr displayed good technique, as he was rarely out of position and kept the Blue Devils from getting more than one shot on any flurry.  He was particularly strong in the second period, making 16 saves and keeping the Blue Devils off the board on a pair of extended 5-on-3 advantages.

2. Michael Hughes, Roseville
Hughes, a junior forward, recorded two of the Raiders' three goals, including what proved to be the game-winner just over two minutes into the second period. He iced the game with a shorthanded, open-netter with 1:26 remaining.

3. Austin Colvard, Roseville
Colvard, a junior defenseman, left town with a extra puck in his bag after he was given the game puck for netting his first career goal. He floated a seeing-eye shot from the point on the power play late in the third period to give Roseville a 2-0 lead.