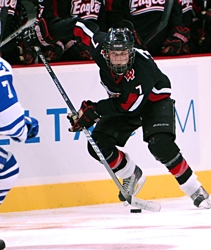 As the calendar turns toward December and the boys' high school hockey season hits, The Week Ahead returns for another year of alerting fans to what we feel are the top games of the week.

The best teams in the state didn't waste any time scheduling each other and that's true of our game of the week, a showdown between up-and-coming Apple Valley and veteran Eden Prairie.  Oddly enough, it's the Eagles who have the most state tournament experience -- and we're intentionally not specifying which Eagles' team.

The two rivals get a bit of distance this year, as the breakup of the old Lake Conference separated them.  Eden Prairie remained in the Lake (or moved into the renamed Classic Lake, depending on your viewpoint) while Apple Valley is in the South Suburban.  Last winter, Eden Prairie won both matchups, 4-2 on Jan. 14 and 4-1 on Feb. 20.

Apple Valley, ranked No. 5AA in our preseason poll, finished a surprising fourth in the state last year, losing to Hill-Murray in the third-place game after a great playoff run through Section 3AA. 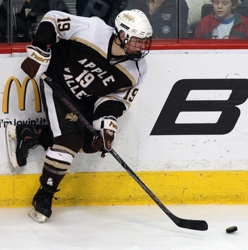 The Eagles were a young team that jelled perhaps a year earlier than most expected.  Now with a year of experience, coach Jerry Hayes' crew won't sneak up on anyone this winter.

The Eagles are solid in all facets of the game, with the speed of junior A.J. Michaelson and size of sophomore Hudson Fasching anchoring the forward lines, the defensive prowess of juniors Vince Pedrie and Derek Smith on the blue line and the veteran leadership of senior Aaron Gretz between the pipes.

Eden Prairie was the up-and-coming power two years ago.  Led by a super sophomore class and Mr. Hockey defenseman Nick Leddy, the Eagles claimed their only state title that year.

Leddy has long since graduated, but the sophomore class is now in its senior year and looking to get back to those same heights.  The "will-he-go, will-he-stay" fall saga of Kyle Rau was watched very closely in Eden Prairie, as the Mr. Hockey favorite is the key to the Eagles' hopes.  He's a terrific offensive threat with great hands and vision.

Along with veterans such as forwards Mark and David Rath, Luc Gerdes and Jack McCartan; defensemen Dan Molenaar, Nick Seeler and Curt Rau; and goaltender Andrew Ford -- the Eagles have been through the playoff wars.

A great early-season private school battle between the best in the East (Hill-Murray) and the best in the West (Benilde-St. Margaret's).  Both teams have designs on winning the Class AA state title this winter and both certainly have the horses to do so.  The Pioneers might be sore after losing their season-opener to Burnsville last Saturday, particularly allowing six goals for the normally tough defensive team.  Goaltender Tim Shaughnessy and the Pioneers will bounce back, although Benilde can score on anyone, led by snipers Pat Steinhauser, Jake O'Borsky, Grant Besse and Christian Horn.

These two programs met in the Class A state championship twice in three years (2006 and 2008), with St. Thomas Academy coming out on top both times.  But that was the last year the Cadets made it to state, as they were upset by Mahtomedi in the Section 4A playoffs each of the last two years.  St. Thomas Academy is the favorite to earn another state title this winter, thanks to great balance up front and on defense.  New goaltending will be key.  Duluth Marshall has been a perennially strong program under coach Brendan Flaherty and this year should be no exception.  Keep an eye on goalie Christian Coffman, a transfer from Duluth Denfeld, who could be the difference in the game.

This game could signal Eagan's ascension to the state's elite this winter, as the Wildcats are a young, but experienced team looking to make their mark.  Michael Zajac is as talented a forward as any in the state, although he hasn't had the recognition that would come with a state tournament berth.  An upset of the Edina would certainly help.  Edina is, well, Edina.  The defending state champions return another title contender with plenty of speed and a top-notch goaltender (Connor Girard).  An injury to defenseman Parker Reno hurts the experience on the blue line.  The Hornets lost to Wayzata last Saturday in the final of the Turkey Trot tournament in Plymouth.

Wayzata has been picked by several outlets as the favorite to win the Class AA title and the Trojans did nothing to dispel that notion by winning the Turkey Trot last weekend, beating Maple Grove and defending state champion Edina by 3-2 scores.  Wayzata has arguably the top line in the state in Tony Cameranesi, Tyler Klein and Mario Lucia.  Wayzata will be battle tested.  This game with Duluth East is just one in a number of tough ones to start the season for the Trojans.  Duluth East is the favorite to repeat in Section 7AA, as the 'Hounds are loaded with great balance in their junior and senior classes and anchored by experienced goalie Jo Jo Jeannetta.  East has been to 12 state tournaments in coach Mike Randolph's 22 seasons.

The season didn't begin on a high note for Hibbing/Chisholm, which lost 6-1 to Little Falls last Friday night at home.  The Bluejackets haven't always started strongly, but certainly have finished well under coach Mark DeCenzo, advancing to the Section 7A finals regularly.  The trio of Nick DeCenzo, Adam Johnson and goaltender Nathan Tromp will be the anchors.  International Falls is another perennial contender in Section 7A (and the Iron Range Conference) and features a strong goalie (Glenn Walls), although the Broncos are thin on experienced scorers.

Two of the state's golden programs meet in a game witih plenty of history.  St. Paul Johnson won four state titles between 1947-1963 and has qualified for 22 state tournaments, although none since 1995.  South St. Paul has been to 28 state tournaments, although only one has come since 1996, and has never won a state title.  They're the granddaddy's of Minnesota hockey in the capitol city and their health is good for the game.  The Packers have continued to produce great players in recent years, although their depth hasn't been as strong as the glory days.  Defenseman Adam Barlow could be the next in the line of Packer greats.  Johnson is on the rise after a down period and could be a darkhorse team in Section 4A, thanks to 17 returning letter winners.

These next three games are grouped together for a very good reason.  Any guesses?  I'll let you off the hook.  In each case, they feature a program playing its first game in its current incarnation. Minneapolis, a new cooperative among all seven public schools in the city, kicks off with a home game against LeSueur-Henderson/St. Peter.  The Novas bring together the Minneapolis East and West teams from last year under new coach Shawn Reid.

St. Paul Highland Park split off from St. Paul Como Park this year to form a new team in the capitol city.  Coach Tom Doyle will lead the Scots, who were a varsity program until 1987.  They open up at home against the St. Paul Saints.

10. Chanhassen at Park of Cottage Grove

Chanhassen, a new school last year, was part of a cooperative agreement with nearby Chaska in its first season.  The programs combined to play a Lake Conference schedule as Chanhassen lay down the roots for going it alone this winter.  The Storm, coached by Chris Wilson, are now on their own in the Missota and will open on the road at Park of Cottage Grove.