To the Brenk of success 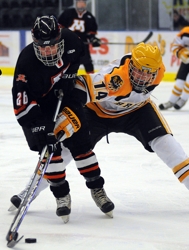 Junior Eric Brenk tallied two first-period goals as Moorhead opened its season with a 3-0 victory over host Fargo South (N.D.) at Scheels Arena in Fargo on Thursday, Dec. 2. Brenk, equaled last season’s scoring output with a power play goal just 42 seconds into the game – a goal that proved to be the game-winner.

Brenk was knocked down in front of South goaltender Evan Fiebiger, but scrambled to his feet just in time to deflect Jacob Uglem’s shot from the point over Fiebiger’s glove for a quick 1-0 lead.

“It really got the team fired up and silenced their crowd and got ours going pretty good,” said Brenk, adding he was embarrassed by a 4-2 home loss to the Bruins last winter and wanted to atone for it.

“I think the biggest thing is that it gave us some confidence at the start,” said Moorhead coach Dave Morinville, who admitted the Spuds had a few early turnovers before they got stronger as the game went along. “We got a little more confidence and a little more patience with the puck.”

A 6-foot-2 power forward, Brenk wreaked havoc in the offensive zone much of the game, using his superior size and puck skills. He added an insurance goal at the 10:51 mark of the first period on a patient play, sweeping the puck across the front of the net and using his long reach to tuck it beyond Fiebiger’s outstretched left toe.

Fiebiger had 41 saves on 44 shots for the Bruins. The senior goaltender, making just his second varsity start, withstood the Moorhead barrage and earned the praise of his coach, David Benson.

“He gave us a chance to win, but we couldn’t score,” Benson said.

Junior Michael Bitzer wasn’t nearly as busy in the Moorhead net, but he made 16 saves for the shutout. The Spuds also limited South during the man-advantage, as the Bruins were 0-for-6 on the power play and rarely got the puck into a dangerous position.

Moorhead gets a week off before its next game, a Section 8AA tilt with Bemidji next Thursday, Dec. 9 at home.

Thursday’s loss was South’s first game since the school divided into the separate high schools (and athletic programs) of Fargo South and Fargo Davies. The Bruins lost several key players to Davies, although they recouped some losses by forming a cooperative agreement with Fargo Shanley this winter.

The Bruins also were missing two of their key players, as captain Alex Olson had to sit out Thursday after taking a game misconduct in last year’s playoff loss and leading returning scorer Jarret Olson-Etches must sit out until after the holidays because of a rules violation.

“We’re deep enough, we just have to figure it out,” Benson said. “The good thing is it’s just the first game. We have to play with intensity all the time." 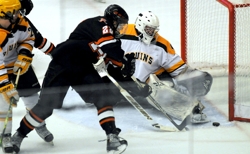 It didn’t take junior power forward Eric Brenk long to display a leadership role for this year’s Moorhead team. Just 42 seconds into the season opener at Fargo South, Brenk muscled his way in front of the net and tipped in a power play goal. It was a monumental goal – and more than likely a big relief – for Brenk, who tallied just one goal last winter as a sophomore.

“Last year, I didn’t feel any pressure because we had all of our seniors back,” said Brenk, who had been a big scorer at the youth level and recognized among the best players in his age group on various Minnesota Hockey advanced teams. “But now it’s just me and a couple of other guys returning that scored. We really feel like we have to put up numbers.”

The 6-foot-2 Brenk finished his first game as the Spuds’ go-to player with two goals, both scored in the opening 11 minutes of the game.

On his first goal, Brenk showed his toughness by taking a hard check in front of the net, scrambling back to his feet and getting his stick on a shot by teammate Jacob Uglem. On the second, he exhibited great hands, reach and patience. Picking the puck up in the left corner, Brenk got a South defenseman to drop to the ice, skated past him, reached around goaltender Evan Fiebiger and tucked the puck into the far right corner.

“I like to use my body and create opportunities,” Brenk said. “I like to think I can make plays. But if I get the puck in front of the net, I’m going to shoot it.”

“I thought he hung on too long, but obviously he didn’t,” said Moorhead coach Dave Morinville with a laugh, who this summer talked about the scoring and leadership he was going to need from young players like Brenk.

After one season on the varsity getting his feet wet, Brenk knew what he needed to do to improve – and he did so.

“He got stronger," Morinville said. "He realized what he had to do to get better and it showed."

1. Eric Brenk, Moorhead
Brenk, a bruising junior wing, got the Spuds off and rolling with a power play goal just 42 seconds into the game. He netted his second 10 minutes later on a play that showed his patience and strength. Brenk scored just one goal last season but will be counted on to be a big presence for the Spuds and so far, so good.

2. Michael Bitzer, Moorhead
Bitzer, a junior goaltender, stopped all 16 shots he saw from Fargo South for the shutout. Scoring chances were few and far between for the Bruins, but Bitzer made a couple of big saves, particularly during a handful of second-period power plays.

3. Evan Fiebiger, Fargo South
Fiebiger, a senior goalie, was much busier between the pipes, making 41 saves on 44 shots. He was especially busy in the third period, when Moorhead fired 21 shots on goal -- but only scored once against Fiebiger, who mas making just his second varsity start.