Changing of the guard?

'The Week Ahead' features Northwest Suburban - and Section 5AA - showdown 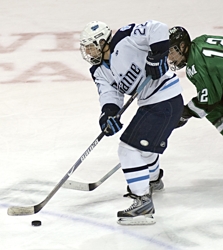 Could the Thursday night game between Blaine and Maple Grove signal a changing of the guard in both the Northwest Suburban Conference and the Section 5AA race? Maybe. Maybe not. Either way, it will be ‘The Week Ahead’s’ Game of the Week due to the possibilities.

It’s been a terrific five-year run at Blaine, where coach Dave Aus and his Bengals have claimed five straight Section 5AA titles. The Bengals have accomplished the amazing feat despite graduation losses, injuries and  tough competition from clubs such as Maple Grove, Centennial and Osseo in that same time.

Despite all those losses, Aus and the Bengals aren’t ready to give up their throne.

“I expect us to compete for the same thing as the past five years,” said Aus, in his 10th year at Blaine. “Six years in a row would be quite an accomplishment.”

Through two games, the Bengals (2-0-0) have shown scoring prowess (six goals each in victories over Roseau and Willmar), but have also allowed seven goals in that same span.

Senior center Jonny Brodzinski (4 goals, 3 assists) has one of the hardest shots in the state and is a true sniper. He can score from anywhere in the offensive zone and has added improving skating skills and fitness to transform himself into a big-time college prospect and Mr. Hockey candidate. Aus called him the best shooter he’s ever coached. 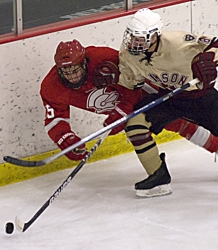 Maple Grove has been the unfortunate recipient of Blaine’s wrath, losing 3-1 to the Bengals in the section title game last winter. The last two seasons have been the best in program history, though, as the Crimson have won 24 games in the Northwest Suburban Conference and 35 games overall. They’ve gone from an afterthought to a possible section favorite in that time. Now, with a talented group of young players coming up through the system who made it to the Bantam state tournament two straight seasons, the present and future looks bright.

“(We) might have the most talent since the school opened,” said longtime coach Gary Stefano. “(We) will be young, but have a very strong junior class.”

The Crimson have started fast, winning three of four games behind a stout defense. Maple Grove gave No. 1 Wayzata all it could handle in a 3-2 season-opening loss, then ripped off victories over Buffalo (5-2), Anoka (1-0) and Andover (4-0).

Goaltender Ryan Coyne (3-1-0, 1.25) has backstopped all four games and is on a shutout string of more than 100 minutes. His .931 save percentage and two shutouts are among the best in the state. He gets plenty of help from a strong defensive corps.

'The Week Ahead' Archives

The two powerhouses in the Classic Suburban Conference have had contrasting starts to their seasons. Hill-Murray has lost two of three games (to Burnsville and Benilde-St. Margaret's), a surprisingly slow start for a team with experienced veterans. Meanwhile, St. Thomas Academy opened with a 5-1 victory over Duluth Marshall. Fairness in analysis, though: the Pioneers' lone victory was 7-0 over the same Duluth Marshall squad. The winner gets a big leg up in the CSC race before the holidays.

A great Iron Range Conference showdown between the two bullies on the block.  Virgina/MI-B rebounded from a shutout loss to Roseville to beat Little Falls (4-1), starting to show the offensive talent the Blue Devils have, led by St. Cloud State recruit Garrett Hendrickson's two goals. Grand Rapids has been impressive in knocking off a pair of Section 7AA rivals in Cloquet (4-1) and Forest Lake (4-3), perhaps signalling to the rest of the section that the Thunderhawks are back.

When the season began, both of these teams were considered good, but perhaps a bit below the level of the top squads in the state. Then the games started and both may be a bit better than that. Eagan has shown great firepower in splitting two games (9-1 over Prior Lake and a 7-6 loss to Edina). Nick Kuchera has seven assists in the two games.  Burnsville also has a one-goal loss to Edina (5-4) and upset win over Hill-Murray (6-4) to split its first two games. Bodhi Engum has allowed four goals in each game, but remains one of the top netminders in the state.

Until someone knocks off Moorhead and Roseau from the top of the Section 8AA mountain (where they've been for 15 straight years), the northwest corner of the state will be home to the Rams and Spuds. Bemidji, a team many believe can be that squad, gets its first crack at Moorhead on Thursday night. The Lumberjacks have a pair of three-goal wins (4-1 over East Grand Forks and 6-3 over Monticello), led by Tyler Follis' four goals.  The Spuds shut down Fargo South (3-0) behind two goals from Eric Brenk and 16 saves from Michael Bitzer.

Last winter, Brainerd was the team that expected to make a run at the Section 8AA crown and took Roseau to overtime in the section semifinals before losing to the eventual champions. The Warriors have started this winter with a flourish, winning all three games while scoring more than seven goals a game. Josh Archibald and Mitch Mclain each have six goals. St. Cloud Tech hopes to join that Section 8AA competition this season and began with a 4-1 loss to Benilde and a 6-3 victory over Chaska. Al Patten is a solid goaltender

7. Warroad at Lake of the Woods

Much like Section 8AA's top-heaviness, the Section 8A race seems to come through Warroad every winter.  Despite graduating a ton of talent, it appears as if this season will be no different. The Warriors won their first two games (over Mound-Westonka and Orono) while scoring 13 goals, three off the stick of All-State defenseman Carson Gray. Lake of the Woods features one of the state's best goaltenders in Alex Lyon, who will be tested.  He stopped 66 of 69 shots as the Bears went unbeaten against the same two opponents (3-2 over Mound-Westonka and 1-1 tie with Orono).

Can anyone stop the Rochester Lourdes' train in Section 1A?  The Eagles are already 3-0 and have allowed just four goals in that stretch. Goaltender Nick Heimer hasn't seen a lot of shots, but he's stopped nearly all of them (60 saves on 64 shots). Want balance? Nine players have already scored goals and no one has more than two. New Prague has kicked off the season with a scoring outburst (10 goals in two games), but haven't been up to par defensively yet (allowing 11 goals). The Trojans will come around, as goaltender Joe Morris is a veteran stabilizing influence.

The Mississippi 8 title could very well come down to these two non-traditional hockey schools, both of whom are on the upswing (although Buffalo could also have something to say about it). The Royals have two wins and a tie in three games, paced by Zach Hnath's four goals. St. Michael-Albertville is 2-0-0 with impressive big wins over Mora and Robbinsdale Cooper by a combined 11-3 score. Jake Larson has four goals.

Section 6A appears to be wide open this winter and these are two teams that should be in the conversation come February. Sartell-St. Stephen lost a ton to graduation, including it's all-time leading scorers, but the Sabres showed they weren't fazed as they beat St. Cloud Cathedral 3-2 in the season opener. Little Falls made a couple of early trips to the Iron Range and returned home with a win (6-1 over Hibbing in which Joey Hanowski had four goals), a tie (2-2 with International Falls) and a loss (4-1 to Virginia/MI-B).