Eden Prairie present and accounted for

State Rankings: Eagles grab top spot in Class 2A; St. Thomas Academy No. 1 in 1A 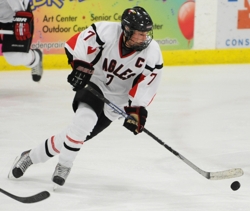 After winning the state Class 2A title with a lineup loaded with sophomores two seasons ago, this was to be the year Eden Prairie rolls out perhaps its best team in the program's history.

Then standout defenseman Dan Molenaar's ankle was seriously injured this fall while he was playing in the Upper Midwest High School Elite Hockey League.

Then Kyle Rau, the heavy favorite to win this season's Mr. Hockey award, decided he was going to forego his senior year to play in the United States Hockey League.

When Eden Prairie opened its season against highly touted Apple Valley on Dec. 2, both Molenaar and Rau were in the lineup. It's hard to miss a guy who registers five assists (Molenaar) or another who stacks dominating shift after dominating shift on top of each other like so many poker chips.

Rau, who abruptly changed his mind about playing in the USHL after announcing he was leaving on the eve of the opening day of the season, has eight points in two games.

"It was quite a scare," said Eagles senior Luc Gerdes, who has three goals and three assists about Rau's announced departure. "He gave the whole team quite a scare when he was telling us he was gone.

"We’re happy to have him back."

With the question marks swirling around Rau and Molenaar emphatically erased, Eden Prairie edged Wayzata for the state's No. 1 spot in the Hockey Hub's first Class 2A rankings of the season.

In Class 1A, St. Thomas Academy is the runaway No. 1 choice ahead of Breck, the defending two-time small-school champion.

Think senior forward Kyle Rau is glad he stuck around instead of playing in South Dakota? Rau, who announced this fall he was going to play in the USHL before quickly reversing decision, has five goals and three assists in two decisive victories over quality teams.

Much of the hype surrounding this team centers, rightfully so, on explosive top line of Mario Lucia, Tony Cameranesi and Tyler Klein. But goaltender Andrew McIntyre and the Trojans' defense has been just as impressive. Speaking of defensemen, D.J. Jones is the team's scoring leader with seven points.

Defending state Class 2A champion Hornets aren't blowing out their opponents -- all but one of their four games have been decided by a single goal. Hornets do finish well -- half of their 20 goals have been scored in the third period.

Red Knights, coming off huge "quality win" over Hill-Murray, the type of win that eluded B-SM for most of last season. Defense looks to be vastly improved from a year ago.

Playing two of the most storied programs in the state, Burnsville knocked off Hill-Murray and lost to Edina on a last-second goal. Blaze have fearsome top line, one of the state's top starting goaltenders in senior Bodhi Engum and always seem to play well in the big games.

The Greyhounds gave No. 2 Wayzata fits, pushing the game to overtime before losing to the Trojans. Rare four-game week highlighted by Friday, Dec. 10 matchup against White Bear Lake at Bears' new arena in Vadnais Heights.

Eagles will need to develop some consistent scoring punch outside the fabulous duo of junior A.J. Michaelson and sophomore Hudson Fasching. Those two have combined for five of the Eagles' nine goals.

Losses to No. 4 Benilde-St. Margaret's and No. 5 Burnsville a bit of a surprise, but this is a team that will only get better as the season rolls along. In other words, don't expect many more losses. Game against No. 1-ranked Class 2A St. Thomas Academy on Saturday, Dec. 11 should be a classic.

Wildcats are in the midst of a wicked stretch of their schedule -- they play top 10 teams Edina (7-6) loss, Burnsville (Dec. 9) and Minnetonka (Dec. 11) in succession. Nick Kuchera ranks among the state's season leaders in assists with seven.

The Skippers' talent at forward runs deep, and it only has been bolstered by the addition of sophomore Vinni Lettieri, who has scored a team-leading three goals. St. Thomas Academy and Eagan loom on schedule.

The Cadets opened in impressive fashion, cruising past traditionally strong Duluth Marshall. Their games only get tougher, as Class 2A superpowers Minnetonka and Hill-Murray are next on the schedule. Senior forward A.J. Reid is going to have a big season -- he already has two goals and an assist.

Two games, two dominating victories. This all-new Breck team looks a lot like the Mustangs of old. You know, the team that has won the last two state Class 1A titles. Thomas Lindstrom the team leader with four goals.

The Eagles have allowed just four goals in victories over New Richmond (Wis.), Superior (Wis.) and Tartan. Alex Funk is the team's top scorer with six points, but depth is the trademark so far as nine players have scored at least one goal.

The Bears are coming off impressive 5-1 win over solid Thief River Falls team that has already upended Roseau. How good is Blake? Games against Mahtomedi and Totino-Grace should answer that question. George Ordway has team-best eight points (2 goals, 6 assists).

The Warriors were missing several key players to open the season, which might explain a slow start in eventual 4-3 win over Mound-Westonka. It didn't take Warroad long to get up to speed, however -- second game was dominating 9-2 triumph over Orono. Defenseman Carson Gray has three goals on six shots.

The Hawks lost a large and talented senior class, but this is the rare small-school program that can recover from such devastating losses. Easy win over Sauk-Rapids Rice indicates Hermantown will be just fine this season. Saturday, Dec. 11, game at No. 1 Class 2A Eden Prairie will offer ultimate barometer.

Toughest schedule in the state? Among small-school programs, Duluth Marshall's lineup of state juggernauts certainly has to be in the discussion. After losing to Hill-Murray and St. Thomas Academy, Hilltoppers get to face another ultra-talented private-school squad in Benilde-St. Margaret's on Saturday, Dec. 11.

After a slow start to the season in loss to Roseveill, the Trojans have scored 26 goals in their last two games. Colin Magnuson's seven goals rank fourth in the state, and his 12 points tie him for second in the state.

Big win at Roseau to start the season has been diminished by losses to Totino-Grace and Blake during Twin Cities road swing. Prowlers have scored just six goals, but are getting their typical stingy defensive play.