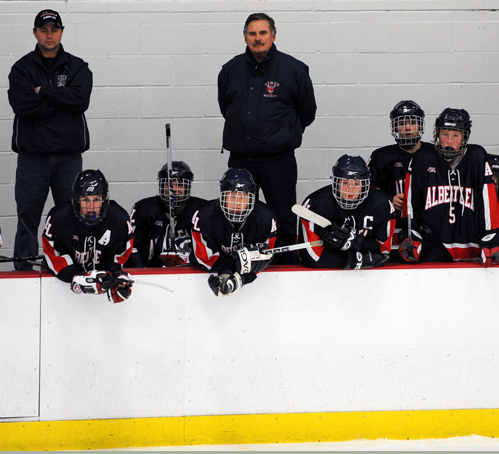 Albert Lea coach Roy Nystrom, center, with his son and assistant coach, David (at left), guided the Tigers to a 7-4 triumph over Rochester John Marshall on Tuesday, Dec. 7. The victory was the 617th in Nystrom's 45-year career as a head coach.

When Roy Nystrom was a kid, he used to marvel at the play of Willard Ikola, the star goaltender for the Eveleth High School hockey team.

The Golden Bears were one of the state’s marquee programs at the time, and they weren’t churning out hockey players and future coaches as much as they were icons.

With Albert Lea’s 7-4 victory over Rochester John Marshall on Tuesday, Dec. 7, at the Rochester Recreation Center, Nystrom passed Ikola with 617 career wins. Only three high school coaches in the nation have more career victories according to the National Federation of State High School Associations record book.

“He’s won more games in less time than anybody,” Nystrom said of Ikola. “I look at him as the icon of Minnesota hockey, no doubt about it, and to be in the same league with him is a real treat.”

“He’s quite a bit older than I am,” said Nystrom, who turns 68 in February. “He grew up two blocks away from me. I watched him play hockey when I was a kid.”

When Ikola took over the Edina program in 1958, one of the first teams placed on the Hornets’ schedule was Eveleth. Suiting up for the Golden Bears that season was Nystrom.

Despite their hometown connection and status as two of the nation’s winningest coaches, Nystrom says he’s never had the opportunity to get to know Ikola, who retried from coaching in 1991.

“I certainly know who he is, and I think he knows who I am,” Nystrom said. “But I haven’t said 15 words to him in all the years I’ve been coaching because we run in different tracks.”

Nystrom said his Tigers played Ikola’s Hornets just once, in the consolation bracket of the state tournament.

Nystrom is in his 45th season as a head hockey coach, including the last 38 in Albert Lea. He spent the first seven years of his career coaching in North Dakota, and he led Grand Forks Central to three state titles.

In typical fashion, Nystrom downplayed his latest milestone with a heavy dose of humility.

“After 45 years, you are going to win some games,” Nystrom said. “I probably lead the doggone state of Minnesota in losses, too.”

Eric Carlson, who scored two goals for the Tigers in their victory over the Rockets, said before the game the players were well aware of the milestone Nystrom would reach with his next victory.

“My dad was even talking to me about it,” Carlson said. “It’s a big honor to play for him and to get the win for him. He’s a great guy, and he deserves it.”

Added senior captain Dillon Stolt: “He’s an icon in town. Playing for him, he’s taught me so much. He just knows so much about the game.”

Nystrom says he still enjoys coaching. He has no plans to retire.

"I'm in my fifth year as a coach, and to think about getting to 600 wins, it's unfathomable what Roy has done," Rochester John Marshall coach Scott Lecy said about Nystrom.

After Tuesday’s victory, Nystrom said the next big milestone he’d like to hit is 50. As in 50 years of coaching.

Nystrom still laces up his skates every day for practice, where he still wears the same beat up “Tigers” baseball cap he’s had for years. One of the few concessions he’s made to age is he no longer stays on the ice during scrimmages.

How much longer does he want to keep coaching?

When asked how many more years Nystrom can keep coaching, Tigers coaches just shake their heads and smile. They say they can’t envision Albert Lea hockey without Roy Nystrom at the helm.

“He’ll be coaching to the very end,” Stolt said.

Junior forward Eric Carlson scored on a penalty shot and a breakaway and added an assist to lead the Tigers, who also got three assists from senior Dillon Stolt.

Next up for Nystrom is No. 3-ranked Ron Baum of Kentwood East, Mich. Baum retired in 2007 with 623 career wins.

The milestone win for the 67-year-old Nystrom, who has spent the past 35 years coaching the Tigers, was in doubt much of the way. The Rockets led 3-2 after the first period after getting goals from Nicholas Paulson, Zack Johnson and Anthony Johnson.

Carlson’s penalty shot goal came late in the opening period and pulled the Tigers to within a goal at the break. Albert Lea pulled away in the second with goals from freshman defenseman Shea Svendsen and senior forward Luke Cheever. 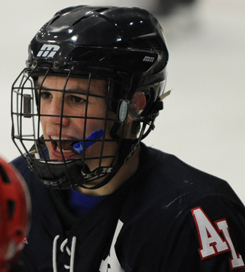 1. Roy Nystrom, Albert Lea
A coach has never received a star in this space, and for good reason. As Nystrom said after getting his 617th career victory against Rochester John Marshall, “In all my years coaching, I’ve never scored a single goal,” then adding, with a smile, “I’ve never given one up, either.” We make an exception here because any coach who can pass Willard Ikola, the Edina coaching legend who retired with 616 career victories, on any list deserves a first star.

2. Eric Carlson, Albert Lea
Carlson, a junior forward, scored on a penalty shot at the end of the first period, then added a breakaway goal early in the third. Both times he snapped quick shots high to the glove side of John Marshall goaltender Jacob Garvey. On Carlson’s third-period breakaway, he hit the crossbar but had the wherewithal to corral the rebound and tap the puck into an open net.

3. Dillon Stolt, Albert Lea
The senior captain logged some serious ice time, playing every other shift for most of the game. He was fresh enough to showcase his playmaking abilities by setting up three Tigers goals.