Bemidji and Moorhead are fit to be tied

Spuds and 'Jacks skate to 1-all tie in 8AA showdown 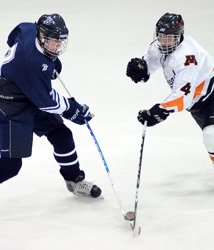 Bemidji came in looking to make a statement. Moorhead just wanted to continue its 15-year run. After one round this winter, however, nothing has been decided.

The two Section 8AA rivals skated and pounded their way through 59 minutes of a 1-1 tie Thursday night at the Moorhead Sports Center. The game was as even as the score might indicate, as Moorhead (1-0-1) outshot the Lumberjacks (3-0-1) by a slim 29-28 margin.

Moorhead and Roseau have been the bullies on the Section 8AA block for the past decade and a half, as one or the other has captured every section title since 1996. Bemidji is one of several contenders hoping to end that streak this winter. The Lumberjacks players believed Thursday’s tie was a good first step.

“I think we proved to everybody that we’re a legitimate team and that we can compete,” said sophomore forward Matt Serratore, who netted the game-tying goal at 6:42 of the second period, his team-leading fifth of the winter.

On the tying goal, junior defenseman Brady Devescovi ripped a shot off the helmet of Moorhead goaltender Michael Bitzer that stunned him momentarily as the puck dropped into his skates. Serratore, the son of Bemidji State head coach Tom Serratore, fished out the loose puck and tucked it past Bitzer for a 1-all tie.

“I was fortunate enough to get the rebound and put it home,” said Serratore, whom his coach, Wade Chiodo, called the “smartest hockey player I’ve had the chance to coach.”

The game remained tied throughout the final 35 minutes, as both Bitzer and Bemidji netminder Miah Graves came up with some big stops. Bitzer finished with 27 saves on 28 shots, while Graves stopped 28 of 29. Graves was part of last year’s Lumberjacks squad, which was rudely welcomed back into Section 8AA by Moorhead. The Spuds beat Bemidji twice, 4-3 in the Lumberjacks’ home rink and 3-0 in Moorhead.

“We needed to make a statement and gain some respect around the section,” said Graves, who felt a scoreless first period was a big step.

Despite giving Moorhead three power plays in the first 17 minutes, Bemidji kept the Spuds off the board. Chiodo had wanted his team to be aggressive, but he knew they had to also play smart hockey and eliminate unnecessary penalties.

“I like playing the physical kind of hockey, in your face, don’t give them any room,” said Chiodo. “I preach that pretty hard.”

Moorhead junior Eric Brenk gave the Spuds the first – and only – lead of the game just 1:06 into the second period. Brenk used his long reach to swipe the puck past Graves as he circled from behind the net. It was his team-leading third of the winter.

In a scoreless third period, Moorhead outshot the Lumberjacks 10-7, but Bemidji had the better of the chances in the overtime, holding a 5-1 shot advantage.

Both coaches felt that the tie was better than a loss, particularly for the Section 8AA seedings – as early as it is to be thinking of the postseason.

“It’s only one game and it’s a tie, not a loss,” said Moorhead coach Dave Morinville. “We’ll get better. It’s still a work in progress.  No disrespect to Bemidji, though.  That's a very good team.”

“Ultimately, I told the guys that we have to build for the playoffs right now,” said Chiodo, who immediately turned his attention to the next game against St. Cloud Apollo on Saturday and didn’t want any part in talking about a possible changing of the guard in Section 8AA.

“Mid-January, you can come and ask me that question again and I’ll tell you, but right now we’re just worried about the next game,” said Chiodo. 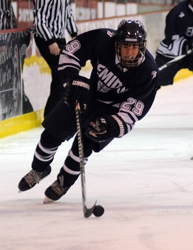 It can’t be easy growing up as a coach’s kid. Especially when your father is arguably the most well known coach in town.

For Bemidji sophomore forward Matt Serratore, it just comes with the territory. Matt, the son of Bemidji State men’s hockey coach Tom Serratore, is used to getting attention for his surname. But it’s his play on the ice this winter for the Lumberjacks that is starting to draw its own notice.

After scoring the only goal in a 1-1 tie at Moorhead Thursday night, he younger Serratore leads the Lumberjacks in points (7) and is tied with Tyler Follis for the goal-scoring lead (5). He has a three-game goal-scoring streak, also getting two each in victories over Monticello/Annandale/Maple Lake and Sartell-St. Stephen.

“He’s really stepped up this year,” said Bemidji coach Wade Chiodo. “Honestly, I can say this. He might be the smartest hockey player that I’ve had the chance to coach.

“He’s so smart out there. Rink awareness and all those things that you ask for in a kid. He does it and that’s why he gets those opportunities.”

For his part, Serratore downplayed his quick start to his sophomore season.

“I’m trying to find those soft areas where I can find time and space,” said Serratore. “It helps playing with two great, smart line mates. I’ve been pretty fortunate so far.”

A year ago as a freshman, Serratore played junior varsity. He’s still slight of build, as the Lumberjacks’ roster lists him at a generous 5-foot-7, 135 pounds. He’s not the fastest player on the ice, and certainly not the biggest, but his hockey sense is apparent.

“I don’t think I finish very well, but I’m pretty opportunistic, I think,” downplayed Serratore. “I find a lot of good areas to go to and that’s what I try do, I try to hide out there and make some plays.”

1. Miah Graves, Bemidji
Graves, a senior goaltender, stopped 28 of 29 shots he faced to help the Lumberjacks to the tie in Moorhead.  He was at his best early in the game, when he helped Bemidji kill off five Spuds' power plays with a few acrobatic saves.

2. Michael Bitzer, Moorhead
Bitzer, a junior goaltender, allowed one goal on 28 shots to earn the tie.  He was tested late, as the Lumberjacks ripped five overtime shots and had several great scoring chances in the extra session.  A great athlete, Bitzer also flashed his quick glove hand on occasion.

3. (tie) Eric Brenk, Moorhead and Tyler Tatro, Bemidji
It's only fitting that in a tie game, the final star goes to a player from each team.  Brenk scored the lone Spuds' goal just 1:06 into the second period and continued his offensive outburst, as he now has three of the four Moorhead goals on the season.  Tatro didn't get on the score sheet, but his toughness and physical play were noted by his coach as a big reason the Lumberjacks were able to shut down the Spuds.