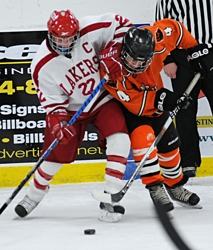 Dropped from most contending lists in Section 6A prior to the season when NHL draftee Tanner Lane decided not to return for his senior season, the Lakers are proving to be a deeper team than anyone imagined – except perhaps amongst themselves.

Senior forward Nate Baker scored 4:17 into overtime to give Detroit Lakes an important 6-5 victory over Mid-State Conference rival Park Rapids Tuesday night at the Kent Freeman Arena in Detroit Lakes, the Lakers’ fifth victory in six games without their superstar.

“You hear all the criticism of how Tanner is gone and they’ll be sunk, so we’re using ‘silence the critics’ as our motto this year,” said coach Chris Denardo.

The Lakers (5-1-0) rallied from a 4-1 second period deficit to defeat the Panthers (1-2-0).  The victory also avenged last February's defeat on home ice, which gave Park Rapids the Mid-State title.

Junior Sam Coborn had given Park Rapids a 4-1 lead with a pair of goals, including a rising snapshot on the power play at 5:49 of the second period.  But the Panthers couldn't hold the lead.

“We just said, ‘keep fighting’,” recalled Baker, who leads the Lakers in scoring with 17 points in six games – almost a Lane-like pace. “That’s a team that if we get the body on them and keep pressuring the puck, goals are going to go our way.”

“It’s always a one-goal game and a battle,” said Park Rapids Area coach Pete Stahnke. “I was nowhere near comfortable (with the lead), because of the way that Detroit Lakes plays. They keep coming at you.”

Park Rapids did regain a one-goal lead midway through the third, as Lucas Maves scored on a shot from the point during a five-minute power play, but Detroit Lakes killed off the remainder with no further damage. The Lakers’ Kirby Inderriden then tied it with 2:27 remaining in the third.  Inderriden picked off a pass at center ice, catching the Panthers' defense flat-footed, and slipped a forehand past goaltender Scott Smith, setting up Baker’s overtime heroics.

Smith finished with 22 saves on 28 shots, while Detroit Lakes went with two netminders.  Michael Brunner played the first two periods, making 16 saves.  Blake Murphy came in for the third period and overtime, getting the victory with 12 saves on 13 shots.

The victory was the Lakers’ second by a single goal this season, also an important turning point. Last winter, Detroit Lakes struggled in close games, winning only one of six overtime games (including a loss in the Section 6A quarterfinals against Willmar) and going 2-6 in games decided by one goal.

“The biggest thing with us is that we have three lines who can go out and play on any given night. Yeah, Baker’s line is doing the majority of the scoring, but all three lines can put the puck in the net,” said Denardo.

“I think instead of us looking for one guy to make the big play every night, we have a multitude of guys who can make a play every night. That’s what excites these guys, that they have an opportunity to step in and make that difference.” 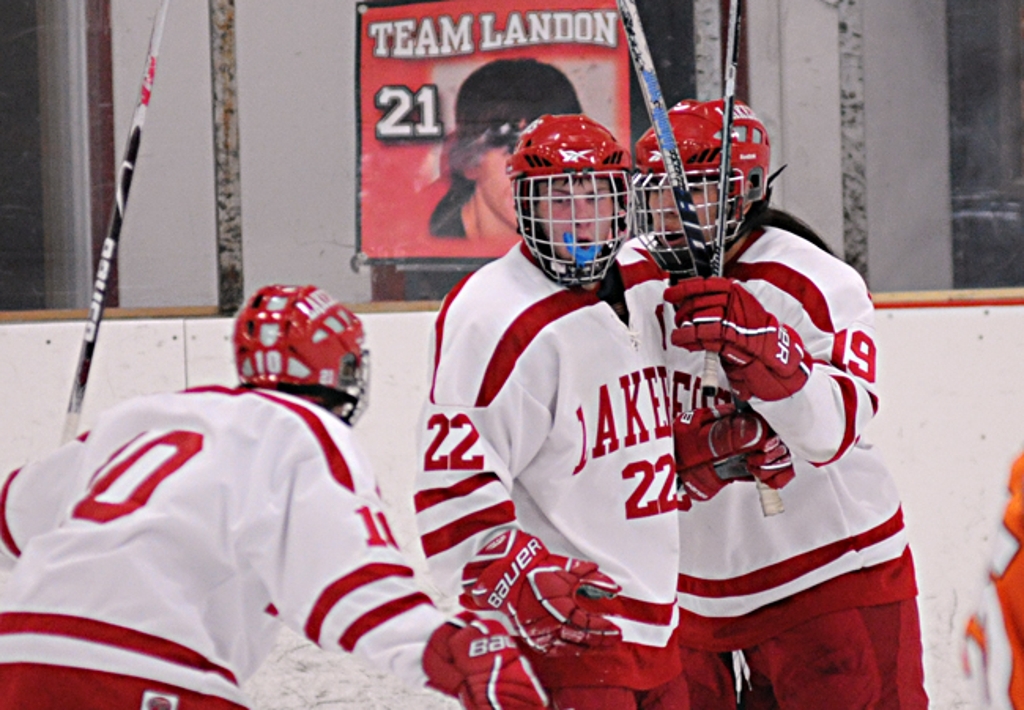 It was easy for experts to look at the scoring talent Detroit Lakes lost this off-season and assume the Lakers were rebuilding. After all, they had lost their top two scorers in Tanner Lane and Alex Phelps, who combined for 70 goals and 147 points last winter.

The departure of Phelps was expected, as he was a graduating senior. But the loss of Lane was supposed to really set the Lakers back.

A sixth-round pick of the NHL’s Atlanta Thrashers and a Nebraska-Omaha recruit, Lane was poised to become the program’s all-time leading scorer this winter. He was just one goal shy of 100 and 14 points shy of 200 in his career at Detroit Lakes.

Most observers expected Lane to carry the program on his back this year. Without him, the Lakers were supposedly lost. But the third member of last year’s top line – senior Nate Baker – didn’t fall for that easy out.

“Everybody around town was saying that we weren’t going to be good without Tanner,” said Baker. “I think it created a fire in the locker room and I we ended up coming together more as a team.

“It was a lot of fun skating with Tanner and Phelpsy last year, but when Tanner decided to move on, I figured I’d have to step up.”

Baker has done just that through six games, leading the Lakers in goals (12) and points (17). He netted the game-winner in Tuesday’s overtime victory against Park Rapids and has a pair of hat tricks already (against Sioux Falls and Northern Lakes). Last year, Baker was second on the team in goals (24) and third in both assists (23) and points (47).

Coach Chris Denardo noted Baker’s scoring prowess early, saying that he has a “solid scoring touch. He can bury the puck when he gets around the net.”

“I try and think one play ahead of everything I’m doing out there,” said Baker. “Always try and find the open guy to get the puck up, put myself in position to score, and a lot of times the puck ends up out my way and I’m able to put it in.” 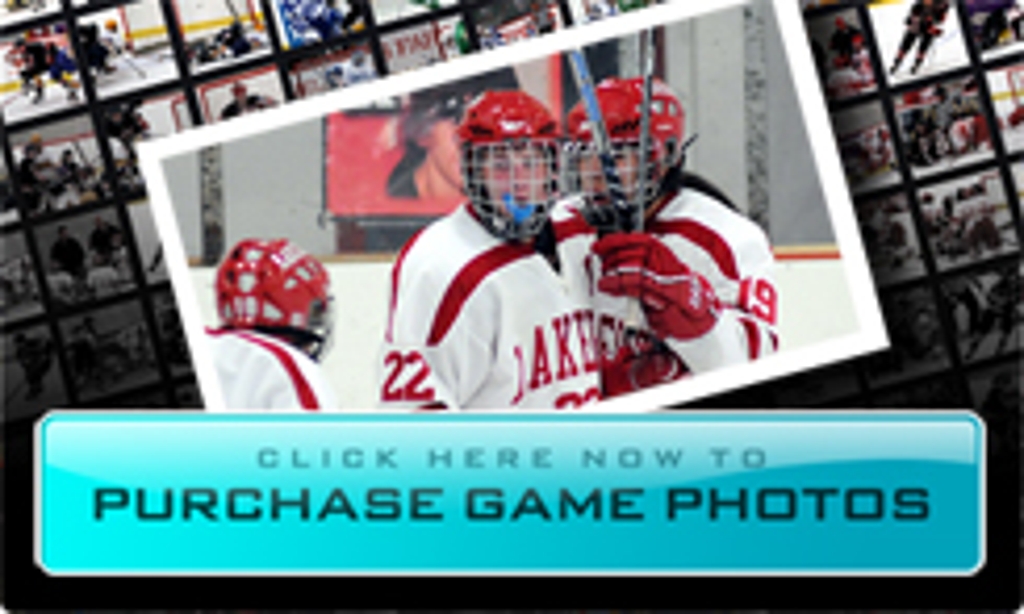 1. Nate Baker, Detroit Lakes
Baker, a senior forward, scored the game-winner on a wrist shot from the high slot 4:17 into overtime to give the Lakers an important Mid-State Conference victory.  The Lakers' leading scorer finished with two goals and an assist -- pushing his season total to 17 points.  He's been an important cog as Detroit Lakes hasn't missed a beat after Tanner Lane's early departure.

2. Alex Mason, Detroit Lakes
Mason, a junior forward, has a quick, heavy shot that gave Park Rapids fits all night.  He assisted on Baker's game winner, but also helped the Lakers rally from a 4-1 deficit with two goals of his own.

3. Sam Coborn, Park Rapids
Coborn, a junior forward, showed his shiftiness and playmaking ability all night long, finishing with two goals.  The Detroit Lakes defense had to account for Coborn on every shift.