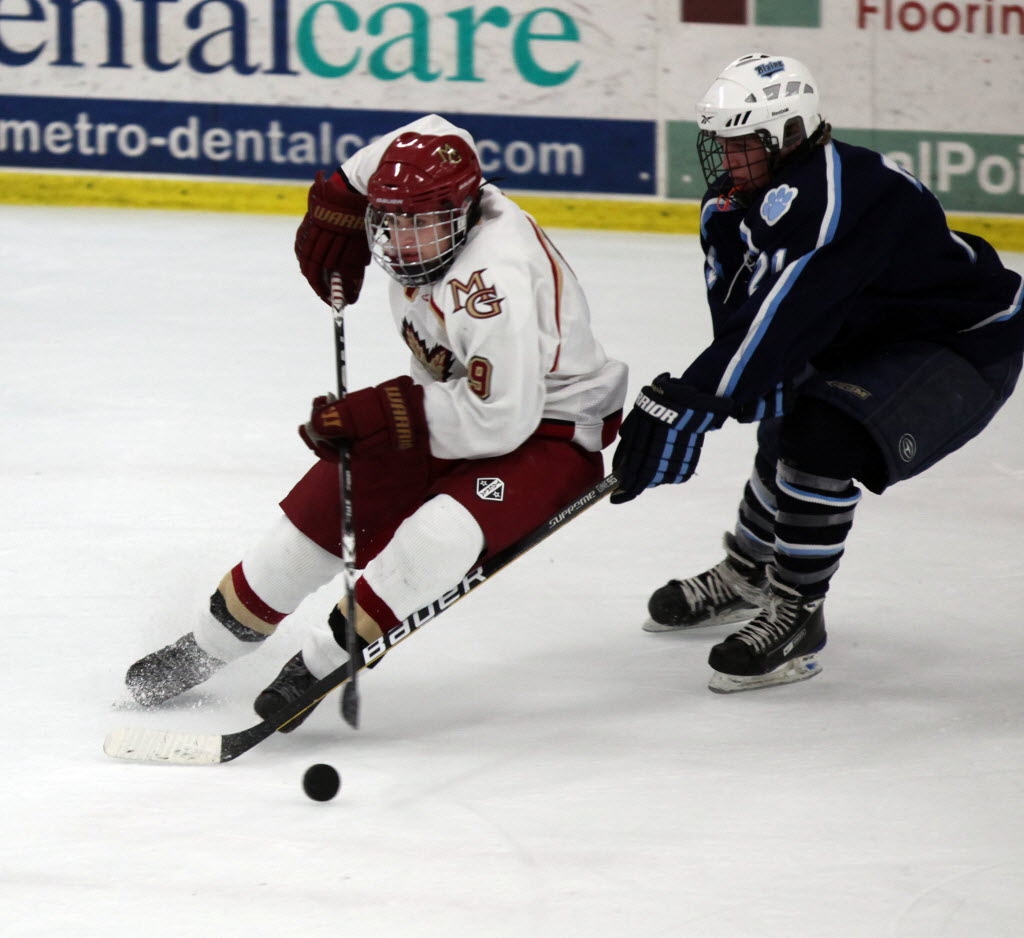 One by one, the shots kept piling up for Maple Grove against Blaine last week in a crucial early-season Northwest Suburban Conference tilt.

“From the get-go we threw pucks at the net,” Maple Grove boys’ hockey coach Gary Stefano said. “Scoring chances — quality chances. Any other night, and maybe five or six go in.”

Instead the Crimson had to settle for only two, with the second being scored with 7.5 seconds left in regulation to force overtime. The teams ultimately tied 2-2 despite Maple Grove holding a 40-12 shots advantage.

Perhaps they deserved the victory, but Crimson faithful weren’t too despondent after the game. They know this was a sign of good things to come.

“Getting a lot of shots is important, but now we just have to bury [them],” Maple Grove junior forward Dylan Steman said. “Get over that little hump and we’ll be fine. We have a lot of heart on this team, and things will come as we go.”

Stuck in a conference and section that includes annual boys’ hockey stalwarts such as Blaine and Centennial, Maple Grove has never been able to break through to the state tournament. The Crimson have been close, especially last year in the Class 2A, Section 5 final. Maple Grove was even with Blaine 1-1 heading into the third period before Nick Bjugstad — now skating for the Gophers — popped in a pair of third-period goals, lifting the Bengals to their ninth state appearance.

With Bjugstad (68 points) and a host of other key players gone for Blaine, and Centennial rebuilding as well, the door is open for the Crimson.

“We can be there at the end again,” Steman said. “We can play with anybody. We won’t get outworked ever.”

Maple Grove could sense this potential changing of the guard coming. It’s still far too early in the season to be talking predictions, but before a puck was dropped, the Crimson knew it would have four players returning with 15 or more points from last season. Senior Ryan Coyne is also back after logging more than 1,300 minutes in goal.

But other teams also have returning talent.

“Champlin Park has a lot of kids back, and Elk River is a good team,” said Stefano, who coached Park Center to its first — and only — state tournament in 1993. “It’s going to be a fun year. Probably (the most parity) in many years. The top three or four teams are all going to be right there.”

Maple Grove gets by despite not having one pure sniper to lead the charge. In the Crimson’s five games played heading into this week, 13 players have recorded at least one point.

The team will shine defensively — the Crimson limited Andover to only five shots before holding Blaine to 12.

“You can’t ask for anything more than that,” Coyne said. “We know this is a good team, but we can’t just rely on that. We continue to give it everything we’ve got every game and things will go well for us.”