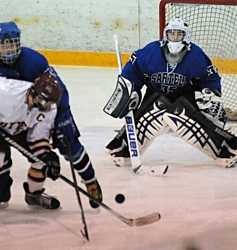 Andrew Deters scored on a goal-mouth scramble in overtime as Sartell-St. Stephen rallied late for a 4-3 victory over host Fergus Falls in a key Section 6A and Central Lakes Conference showdown Thursday night. The Sabres (3-2-0) had tied the game with just 14 seconds remaining after giving away an early two-goal lead against the Otters (2-1-1).

At the 2:42 mark of the extra session, Sartell-St. Stephen junior defenseman Christian Murray flipped the puck toward the Otters' net, where it got held up in traffic in front of Fergus Falls' goaltender Austin Carr. Deters found the loose puck and slipped it past Carr for the game-winner, his second goal (and third point) of the night.

“In OT, coach said the goal was going to be a dirty one and he was right,” breathed Deters, who was still exhausted from his long night well after the game ended.

On a frigid night in Fergus Falls, the Sabres came out of the locker room on fire, scoring twice within the first six minutes to take a 2-0 lead. Matthew Husmann tallied a power play goal at 2:34 with an assist to Deters, then Deters poked one past Carr just over three minutes later and it appeared as if the rout was on.

But the Otters began to take the body and pressured the puck with a hard forecheck, creating numerous offensive opportunities throughout the remainder of the game.

“We challenged these guys to make some plays and we were able to create some turnovers and get some opportunities off of that,” said Fergus Falls coach Mike Donaghue, who made it a point of emphasis for his Otters to move their feet.

Bill Rodning brought Fergus Falls within a goal late in the first period and defenseman Aaron Ahlgren tied it midway through the second, a period in which the Otters outshot Sartell-St. Stephen by a wide 16-2 margin. With just under 10 minutes remaining in the third, Stephen Abel followed his own shot to give the Otters their first lead of the game, 3-2.

That lead held until the clock ticked down the final seconds. With 14 seconds left, Husmann fluttered a long shot toward Carr, which deflected off a scrum of players and rolled toward Austin Guggenberger. The senior calmly directed it just past Carr's outstretched skate for the tying goal.

“In the third, we just asked the guys to get back to what they were doing before,” said Sartell-St. Stephen coach Ryan Hacker. “Raise the intensity, move our feet, do the little things and they responded.”

The goal seemed to energize the Sabres and they dominated play for much of the overtime session, holding a 5-1 shot advantage. Still, Fergus Falls did outshoot Sartell-St. Stephen 39-25 for the game. Carr made 21 saves in a losing effort, while Alex Halupczok was busy with 36 saves on 39 shots.

“(He) battled hard to keep us in there. He made some great saves,” said Hacker of his senior goaltender. 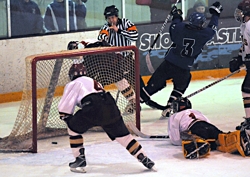 What does a program do when it graduates a large and talented senior class that led to back-to-back 18-victory seasons – the best two years in its history? Sartell-St. Stephen is finding out this winter. And it’s a learning process.

“We lost a lot of guys to graduation last year and we do have some guys who have played some, but they have taken on a leadership role,” said Sabres’ coach Ryan Hacker.

One of those players is senior forward Andrew Deters, who was named a team captain this winter and was the leading scorer (12-31-43) from last winter’s school record-tying 18-victory team.

“It’s a tough role,” said Deters of his captaincy this winter. “You have to stay consistent and play hard shift in and shift out. You have to show the guys, so they’ll follow you.”

Yet despite that firepower, Deters was the team’s leading scorer and set a school record for single-season assists (31).

“I think I have really good vision,” said Deters. “I’m not the fastest guy out there, but I have good hands and see the ice well and can get the puck to the open guy.”

Deters has picked up right where he left off, with three goals and five assists through the first five games this winter, including the game-winner Thursday night at Fergus Falls.

Hacker called Deters a “great all-around athlete and a fantastic playmaker on the ice. His leadership and drive will be a key to our success this season.” 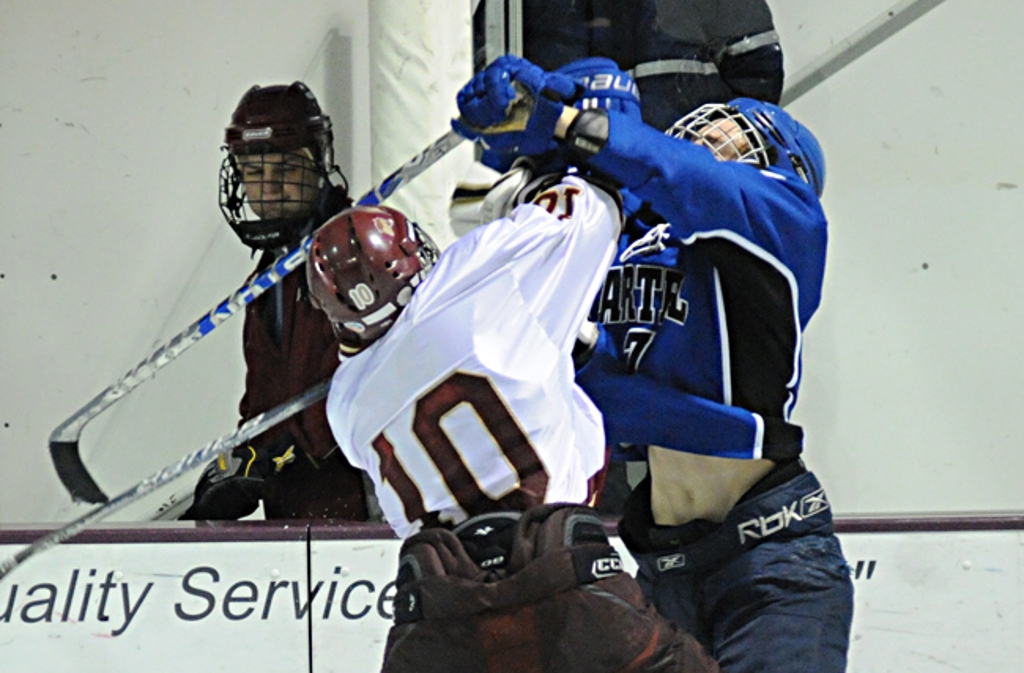 Order photos from the Sartell-St. Stephen at Fergus Falls game!

1. Alex Halupczok, Sartell-St. Stephen
Halupczok, a senior goaltender, nearly single-handedly kept the Sabres in the game through a Fergus Falls barrage in the second period.  He stopped 15 of 16 shots in the second, as Sartell was outshot 16-2 in that period and 39-25 for the game.

2. Andrew Deters, Sartell-St. Stephen
Deters, a senior forward, could easily have been the top star for his game-winning goal in overtime.  He also netted a goal in the first period and assisted on the first Sabres' goal.  On an otherwise young team, Deters provides a veteran stabilizing influence.

3. Blake Brazil, Fergus Falls
Brazil, a sophomore forward, didn't factor in the scoring column for the Otters, but it wasn't for a lack of chances.  He was constantly carrying the puck into the Sartell zone and at the center of most of the team's good scoring chances.  Brazil was part of a solid Bantam team last winter that has made its impact early on the varsity.