Nick Mueller- The senior defenseman plays much bigger than his size. He has excellent skating, quick hands, and great hockey sense that allow him to jump into the offense in all three zones. Plays against oppositions top players and still produces. Exceptionally dedicated to improving his game, look for Nick to take his game to a new level. Nick participated in and earned recognition at the 2016 Model Camp hosted by the University of Minnesota. 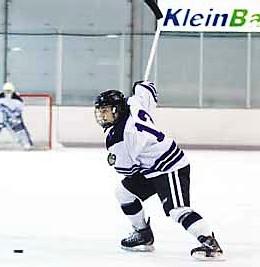 Senior captain Mueller had 3 goals & 17 points as a junior & was named All-Conference.

Cade Stensby- Possesses great hands, good speed, and offensive creativity. Catalyst for his linemates but is a deceptive scorer in his own right. He led the team in scoring as junior and is looking to up his production as a senior. He has worked hard to become a more complete player and will a big role in all situations. Cade played in the High School Elite League as a member of Team CCM this fall. 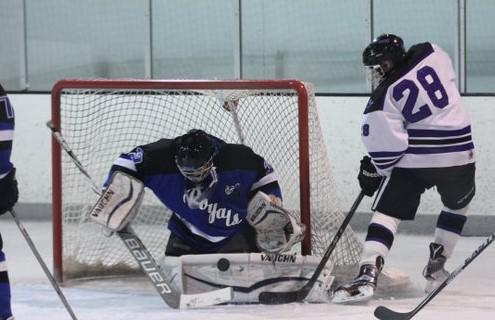 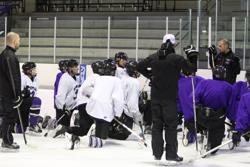 Coach Aaron Johnson addresses the team during the first week of the season. Courtesy of R. LaPlante (@laplante71)

Coach Aaron Johnson heads into the 2016-17 hockey season with a quiet confidence. Coach Johnson is entering his tenth season as a high school coach (129-98-12) and he is starting to feel like a veteran coach, "it goes by so fast, it wasn't that long ago I was a young coach. Over the years I have learned what kind of coach I am and the kind of program that I want to represent."

Joining Johnson behind the bench this season is Hall of Fame coach Bruce Johnson; father to both Aaron and assistant coach Thomas. Bruce brings 49 years of high school and college coaching experience to Bison Boys Hockey. Aaron Johnson said of his father "he is a such a diligent teacher, not only to the players but the rest of the coaching staff. He is a huge benefit to the team." This is Bruce Johnson's second go-round with the Bison having served as an assistant during the 2011-2012 season.

Also rejoining the high school staff is Dave Carothers who was a part of Mike MacMillan's staff in the mid-2000s. Aaron Johnson stated, "Dave is great with the kids and he understands the dedication it takes to develop players." Carothers will work with long-time staff member Scott Goodmanson heading the JV team. Goalie coach Bill Manuel rounds out the coaching staff.

Expectations for the Season

Buffalo is coming off an up-and-down season which their record dipped to .500 in the regular season, followed by a first round exit to Moorhead, and are looking to make solid improvement to the win total. The team returns with experience and three of its top five scorers from a year ago but will need more contributors throughout the lineup to score more than they did in 2015-16.

Forward depth should be the strength of the team. The forwards feature very good speed throughout the group with some skill and grit mixed in. Senior Blake Habisch has one of the best first steps in the state and speed to burn. Habisch led the team in goals (13) and finished at a point-per-game, he’ll be relied upon to produce in all situations. Leading point producer from last season Cade Stensby, is a slick passer and nifty puck handler, he has improved his overall game and should see a big jump in responsibility and in his impact on the team. Two-year captain Tom ‘Wally’ Rooney had a tough junior season as he suffered several injuries that slowed him. But the relentless worker returns healthy and with something to prove. Seniors Stone Goodmanson and Luke Ramsey return and will be counted on to produce offensively after solid seasons. Several underclassmen will be vying for a top-9 roles, including 6’4 sophomore Treyton Welch and slick playmaker Ben Klein.

On defense, seniors Nick Mueller and Jon Pearson will lead the d-corps. Mueller is an excellent skater, savvy puck mover, and important point contributor. Pearson is a big strong player with sneaky speed, puck patience, and a big shot. Slick senior Nick Hanson has developed his offensive chops and is looking to up his point totals. Junior Ben Lindvall and senior Jack Stevens were regulars a season ago and should round out the defense. Sophomore Joe McNamara (HP 15 Summer Camp participant) has the potential to bring energy and offense to the Bison back end as well.

In goal, the Bison graduated three seniors a season ago and are looking for a young goalie to grab the starting job in 2016. Junior Noah Raisanan is a fierce competitor who had a solid JV season in 2015-2016 and has worked to improve his game. Sophomore Nathan Mueller (HP 15 Summer Camp participant) is a steady, calm, and confident goalie who is looking to his stamp on the Bison program.

Blake Habisch- Extremely explosive skater that gets to top-gear quickly. Will beat defenders with his speed and unafraid to get to the net to score. He is relentless on loose puck and has a motor that never stops. Reliable in all situations and dangerous whenever he’s on the ice. Opponents describe Habisch as a 'player that is difficult to contain.' 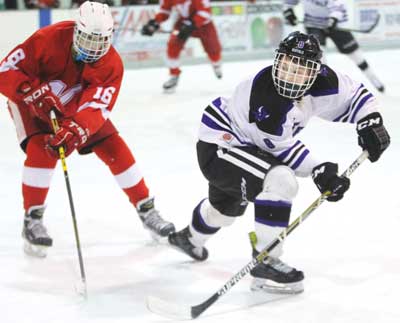 Captain Habisch led the Bison with 13 goals. He finished with 25 points & was named All-Conference.

Tom ‘Wally’ Rooney- He is unrelenting skater, who creates offense by out-hustling his opponents. Unafraid of tough areas, he has quick hands that allow him to score greasy goals. Wally has had injuries that slowed his production but his return to health gives the team a major boost. Wally is an excellent penalty killer and good point producer. Wally is a three year regular and two time captain. Also goes by nickname 'Rust' or 'Rusty.' 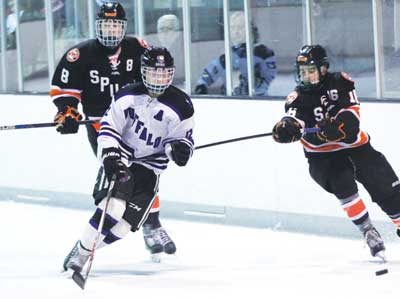 Doc Ahrens hangs up his skates

Buffalo hockey founding father and longtime coach Doc Ahrens has retired from the Buffalo staff. Dr. Ahrens came to the Buffalo community in the early 1970's and led the creation of Buffalo youth and high school hockey. Before establishing hockey in Buffalo, Dr. Ahrens was a all-state star at Duluth East High and standout at the University of Minnesota-Duluth. 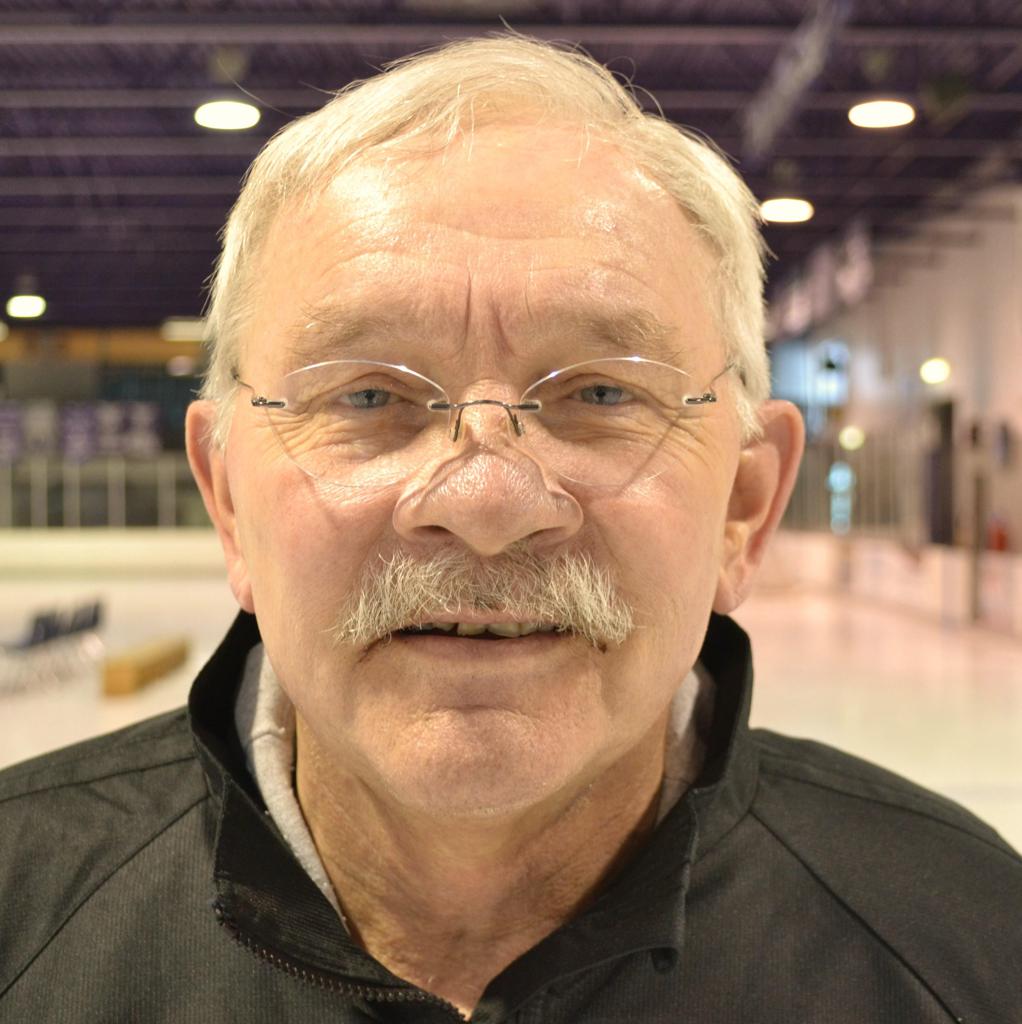 Doc Ahrens was a favorite with Bison hockey players for more than 40 years.

Stone Goodmanson- A late bloomer, Goodmanson’s hockey sense and quick shot will give Buffalo a secondary scoring threat. He is physical for his stature and uses his body well. Has worked hard to improve his game and will have a bigger role as a senior.

Jon Pearson- He has a big shot from the point and is learning to play more physical. Jon is a solid skater, has good vision that helps him make a good first pass. He will be expected to play big minutes and in all situations. Comes into the season in excellent shape and will be counted on to build upon a solid junior season.

Treyton Welch So. W.- has the tools to be a scoring threat throughout his high school career. Standing 6’4, Welch skates very well, can over-match defenders with reach and strength, and will play a physical game.

Joe McNamara So. D.- is always looking to create offense when the puck is on his stick. He has good speed, strong edges, and makes a good first pass; he utilizes those assets to lead the rush. He has the work ethic and energy to be an impact player.

Nathan Mueller So. G.- exudes confidence and plays a calm game. He is technically sound and athletic between the pipes. He is a total competitor and won’t give up on any play. 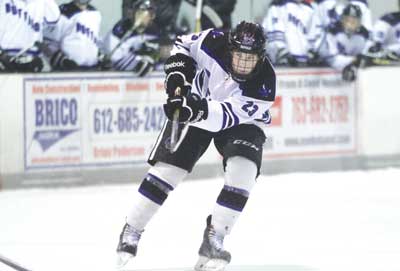 Pearson looks to have a strong senior season 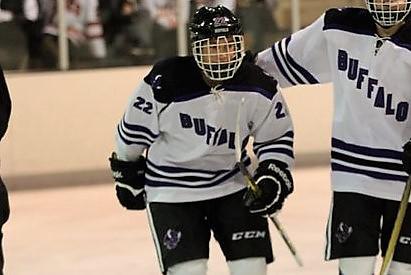 Goodmanson will be counted upon for secondary scoring 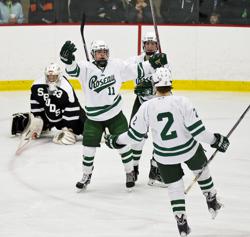 Bemidji- The Lumberjacks lost a lot a talent but still have Brady Tatro and Alex Pollock up front to lead the offense. Chase Hartje is a great skater and will lead the backend. Two-time 8AA champions have a solid foundation and could push the Spuds.

Moorhead- The Spuds return some high-end talent featuring juniors Carter Randklev and Cole O’Connell. Randklev is a dynamic scorer and O’Connell is a slick playmaker, the combo is a problem for any opponent. Defenseman Carson Kosobud is as tough to play against as anybody in the state, a punishing hitter and a stingy defender. Joining Kosobud on the blueline is sophomore sensation Ethan Frisch, a North Dakota commit, who earned rave reviews during the Elite League and looks to put his stamp on the high school season. Goalie Lance Leonard was very good down the stretch for the Spuds.

Rogers- Rogers lost Mr. Everything Dustin Schoepke to graduation but will look for new leaders throughout the line-up. Sophomore Nate Thelen had a strong freshman season and will lead the Royals’ deep blueline this season. Seniors Jordan Fischer and Jake Moss will need to lead the way offensively. Coach Todd Weisjahn takes over the head coaching duties for the Royals.

Roseau- The Rams feature elite talent in Bryden Stoskepf to lead the team offensively. Coach Andy Lundbohm's proud program is looking to return to the top half of section 8AA.

St. Cloud- The co-op team of Tech and Apollo will be in their first year as a team. Juniors Nick Portz, Brad Amundson, and Lars Nelson had strong sophomore seasons at Tech. Apollo’s junior class is led by Noah Bissett and Carter Rieland. It might take some time but St. Cloud could give teams trouble.

St. Michael-Albertville- The Knights feature one of the most explosive scorers in the section in Mitch Bourgerie, he can change games by himself. The Knights lose much of their size but will feature some skill upfront. Star goalie Kyle Hayden returns in net for his final season and will always give his team a chance to win. 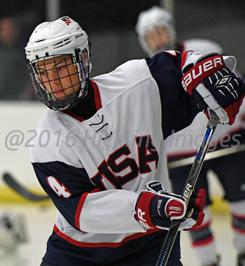 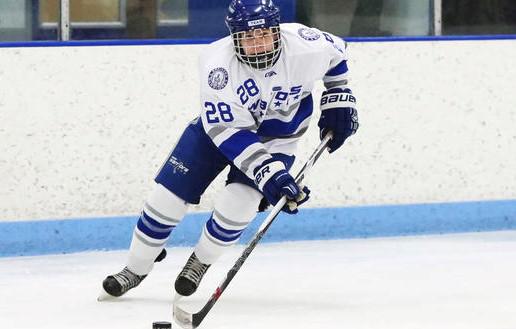 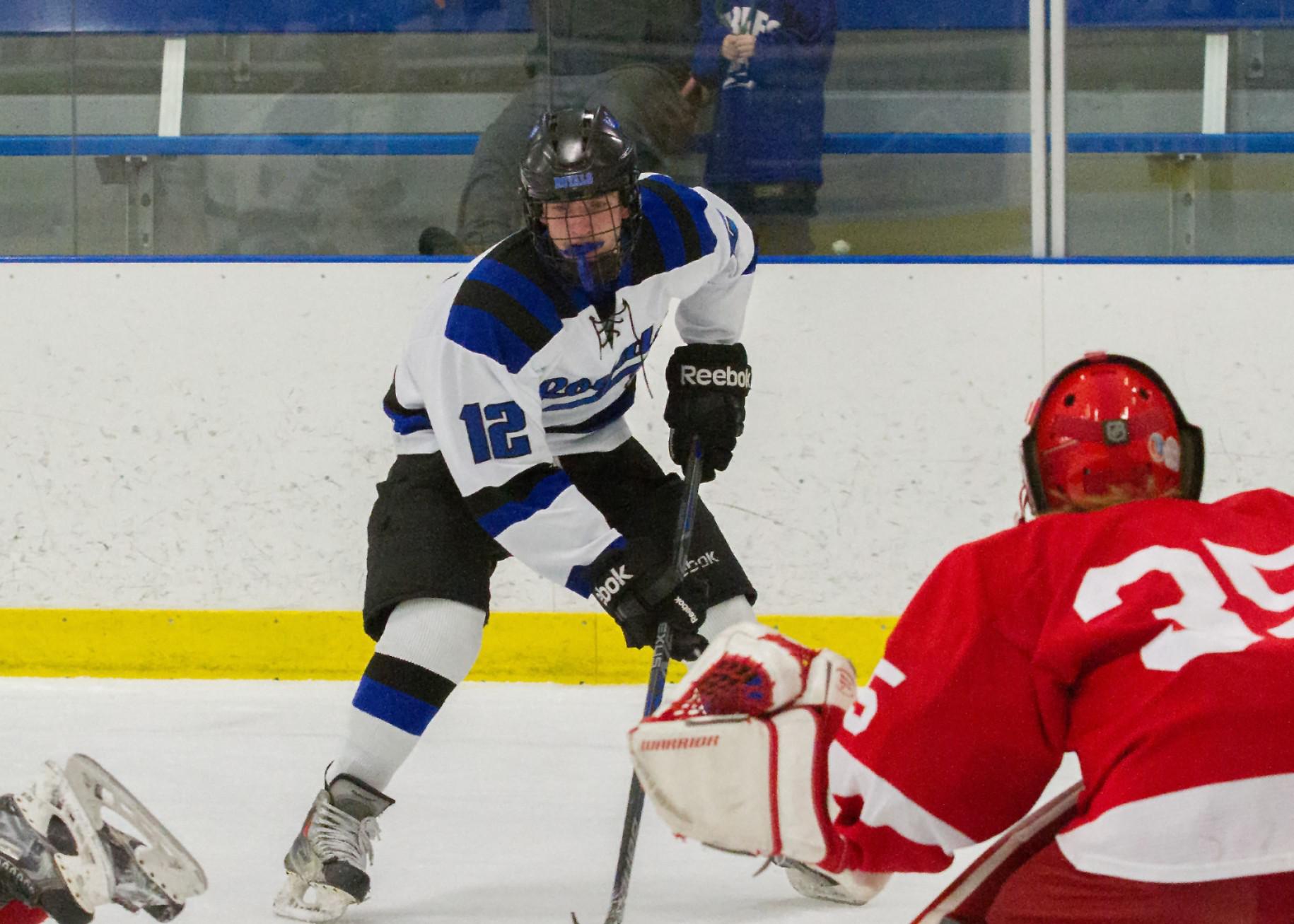 Rogers' Jake Moss will lead the Royals offense in 2016-17 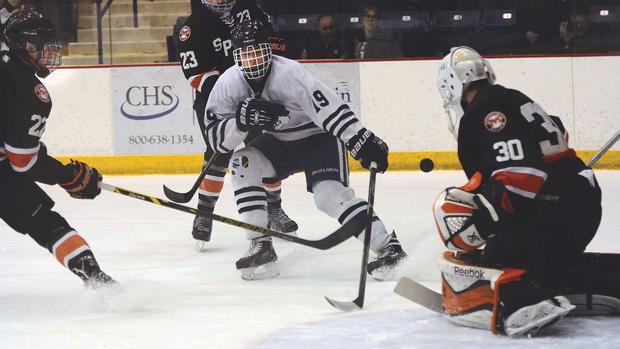 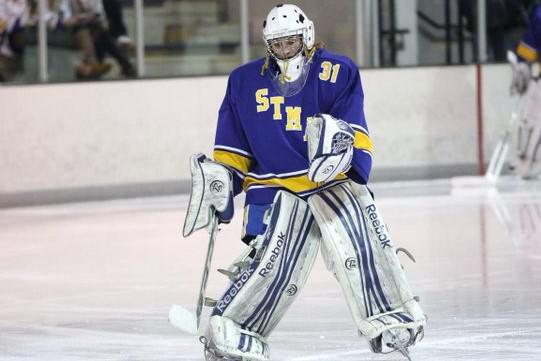