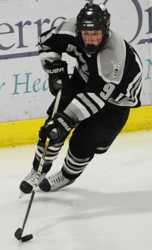 Hard work can take a team a long way.

There is a reason why Roseville now has a record of 5-1-0 after taking down Forest Lake 2-1 at the St. Croix Rec Center tonight.

The Raiders did not hang their heads after Forest Lake scored a late goal in the first period. If anything, they came out harder and scored two goals, which ultimately won the game.

"I told our guys that one goal is not going to win this game," Roseville coach Jeff Pauletti said. "You look at all the high school games played and there are not a lot of them that are low scoring."

Roseville used a blue collar approach, throwing pucks at the net from just about every place on the ice and attack the net after the shot.

"They did a nice job collapsing on our net," Rangers coach Aaron Forsythe said. "They got a lot of shots on net and were able to do that against us."

Down 1-0 in the second, Greg Madden tied it up with a shot inside the right face off dot. It was nothing pretty. Just a low shot at the feet of Rangers goalie Paige Skoog, who was busy with 35 saves.

With less than three minutes to go in the second, Roseville struck again and it was a late goal that carried over into the third.

Jake McCann popped in a one-timer in the slot, where he was all alone. It beat Skoog low glove side and it was all the Raiders needed.

"It felt good," McCann said. "Was open in the middle and got a nice pass from Ryan Busch."

With the lead and momentum, Roseville stuck to what was working and handled the Rangers until they pulled the goalie.

"We got a little lucky there at the end," Pauletti said. "They rang a few shots off the post, but it was our friend today."

The forecheck was stifling and Forest Lake was having trouble just getting the puck out of the zone.

There was not let-up from Roseville as it did not go into a defensive shell trying to hold the lead. The Raiders kept attacking and made the Rangers uncomfortable on their end of the rink.

"We played well in their zone for most of the night," McCann said. "That is the kind of work we are going to need to win these games."

"This is a team that doesn't have a 50-goal scorer," Pauletti said. "In that locker room are guys that have to work hard and they did tonight."

Roseville is right there in the Suburban East Conference and with performances like tonight, it hopes the wins will keep coming.

"We will have to see," McCann said. "There are a lot of games left, but if we continue to play like this, we should pull out some more wins."

Skoog kept the Rangers afloat, but the Raiders where just too much with 37 shots and more quality scoring chances.

"It was just a matter of time before we got some by him," McCann said. "We had the chances and the shots."

Staying Aggressive With the Lead

Early on it looks like Roseville and Forest Lake will be contenders in the Suburban East.

Tonight, the Raiders took a step in that direction and showed that they know how to hold onto a one-goal lead.

A dominating third period gave Forest Lake no chance. The Rangers only registered one shot on net for a majority of the third period, until they pulled the goalie and racked up some shots in the closing minute.

"I thought we played a really good third period," Pauletti said. "They have a lot of guys that can score goals, but we just kept getting shots and were solid in our own zone."

Roseville was the aggressor in the final period and tired out the Rangers.

With White Bear Lake off to a 4-0-0 start in SEC play, Roseville will have to maintain a high level of play to just keep up.

If the Raiders continue to close games out like they did against Forest Lake, there is no reason why Roseville shouldn't be in the title conversation come the end of the regular season.

The loss for the Rangers does not mean it is all over. A year ago the SEC had three teams tied for the title at the end of the year. However, it will need to generate more scoring chances from other lines besides the Tyson-Kohls-Franklin line.

It is a long season and with the parity in the SEC, every night is big.

Forest Lake got 35 saves from Paige Skoog, but it was not enough.

Roseville scored two goals in the second period, after suffering a late one in the first.

It did not bother the Raiders, which came out with a little more fire for the final two periods.

Nick Lehr had a clean game in net for Roseville, stopping 24 shots.

Jake McCann scored the game winner from the slot with just under three minutes to play in the second.

Greg Madden got the Raiders on the board earlier to tie the game.

C.J. Franklin opened the scoring in the first, chipping away at the right post, not giving up until the puck crossed the goal line.

His line, with Tommy Tyson and Lucas Kohls were the main offensive threat for the Rangers tonight.

The Raiders will have a chance at an early Christmas present on Tuesday when it hits the road on Thursday to play Wayzata. A win their will really open some eyes in the state as Wayzata is ranked No. 1.

Forest Lake will be at home against Hastings on Wednesday in an SEC battle.

1. Jake McCann, Roseville
McCann buried home the game winner in the second period on a one-timer. It was the only pretty goal of the night for both teams. McCann was also all over the ice in the offensive zone, creating chances for teammates that out up 37 shots on net.

2. Paige Skoog, Forest Lake
He stopped 35 shots and was the only reason Forest Lake even had a chance to tie the game in the third. If the Rangers win the game, or even tie, Skoog is probably the first star. The junior was under fire for most of the night and kept a cool head.

3. Nick Lehr, Roseville
Even though he wasn't busy for most of the game, Lehr had to be sharp in the final minute. Forest Lake pulled its goalie and had some scrums in front of the net. Lehr stood tall and helped Roseville stay near the top in the SEC standings. 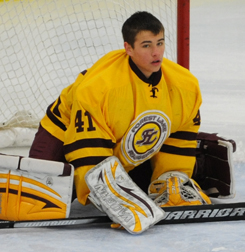