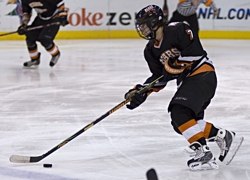 Could this be the game that ends the streak?  One of the state's best rivalries has been decidedly in favor of Hill-Murray in recent years, but White Bear Lake appears to have its best team in several seasons -- as well as a new rink that will feel like home (and not the shared facility at Aldrich Arena that was draped with Pioneers' banners even during a White Bear Lake home game).  The new arena is smaller than Aldrich, so get there early for this one.

White Bear Lake (5-1-0) has started the new season with a bang.  The Bears' only slip up came against No. 5-ranked Duluth East (a 5-2 Greyhounds' win on Dec. 10).  Otherwise, White Bear Lake has been rolling behind a high-powered offense and stout defense.

Nobody has been wielding a hotter stick than White Bear Lake's Mac Jansen (10-4-14), who has ripped in seven goals in the past two games (three in a 4-2 victory over East Ridge and four in a 7-1 win against Cretin-Derham Hall).

But even that outburst hasn't allowed Jansen to catch teammate Brandon Wahlin (11-9-20) for the lead in goals or points. Wahlin already has two four-goal games (versus Rochester Century and Woodbury) and has scored at least three points in four of six games.

The two high-scoring seniors have helped White Bear Lake average 5.8 goals per game and, combined with a defense that allows just 1.7 goals, makes the Bears a tough team to beat.

The defense is young, including juniors R.J. Majkozak and Jack Morrisette and sophomore Lance Carney, but talented. 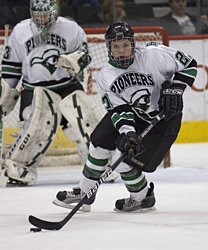 Hill-Murray (4-2-0), meanwhile, lost two of its first three games but has started to crank up the machine the past two weeks, outscoring its last three opponents by a 17-4 margin.

The Pioneers were expected to be a top-three team all season and were tabbed as a state championship favorite by more than a few experts, present company included.

The Pioneers appear to have no cracks to expose, as they boast of a balanced offense that goes more than three lines deep, a hard-nosed and experienced defense, and veteran goaltender Tim Shaughnessy (2.20 GAA, .889 SV%), who begins his third year as a starter.

Arguably one thing the Pioneers don't have is a true go-to scorer, though. Through six games, 14 players already have a goal, but only one has more than three (senior Ben Bahe with six). The sophomore corps of Zach LaValle (3-3-6), Jake Guentzel (2-5-7) and Luke Voltin (3-1-4) has come out strong.

Cotroneo, the son of Jim Cotroneo and grandson of Lou Cotroneo, both St. Paul Johnson legends, is quietly one of the best defensemen in the state. He's strong on his skates and controls the defensive zone.

There has been quite a playoff history between these two programs in recent years.  Warroad has ended the Prowlers' chances in each of the past three years, including the last two in the Section 8A final. It's been a rocky start for both this winter and this game will be important for earning momentum into the new year. Warroad (3-4-0) has lost four straight games and been shut out in the last two, while Thief River Falls (4-3-0) has been up and down, although the Prowlers are coming off a 10-2 victory over suspension-decimated International Falls. Each is attempting to recover from the graduation of an All-State star: Warroad's high-scoring Brock Nelson and Thief River Falls' netminder Zane Gothberg.

The former Lake Conference are are each coming off an overtime loss in their most recent games, Eden Prairie (5-1-0) dropping a 3-2 decision to Edina in the Hornets' annual Holiday Classic and Eagan (2-2-1) falling 2-1 at Lakeville North, although the Wildcats outshot the Panthers 55-24. Eden Prairie's power play is lethal, hitting on 44.4 percent through six games, led by Mr. Hockey favorite Kyle Rau (9-9-18), David Rath (9-6-15) and defenseman Dan Molenaar (2-9-11), who have combined for nine power play goals. On the other hand, the Wildcats' defense has been typically stingy, allowing just 2.40 goals per game. Will Merchant (5-2-7) leads Eagan in goal scoring.

Neither program is considered the favorite in their conference (Benilde-St. Margaret's gets that designation in the North Suburban) or in their section (St. Thomas Academy in Section 4A), but both are very dangerous. Totino-Grace (5-0-0) has started fast in conference play, already beating four opponents and scoring 6.0 goals per game while only allowing 1.8. T.J. Roo (6-10-16), Derek Lodermeier (8-6-14) and Danny Heck (6-8-14) have carried the goal-scoring load, as no other player has more than two.  Spring Lake Park (3-2-0) has yet to get its potent offense cranked up, as the Panthers have scored exactly three goals in four straight games. Brandon Jones (2.20 GAA, .908 SV%) has been solid in goal, replacing longtime starter Mike Nelson.

Don't forget about these two perennial powers. Despite graduation losses that included a half dozen of the state's best players, both are sneaky good again this winter. Blaine (4-0-1) lost Mr. Hockey winner Nick Bjugstad, but Jonny Brodzinski (6-8-14) and Dylan Lambert (5-6-11) have picked up the scoring load, while Nick Malvin (1.72 GAA, .936 SV%) has stepped right in between the pipes. Minnetonka (4-1-0) just suffered its first loss, to Benilde-St. Margaret's, but the Skippers look just fine after graduating four DI recruits. Vinni Lettieri (6-3-9), the son of former Minnesota Kicks' goaltender Tino Lettieri and grandson of Lou Nanne, is proving to be an immediate impact scorer and leads the team in goals.

Hermantown (5-0-0) has made a statement to those who thought the Hawks would suffer a rebuilding year after losing 14 seniors, winning its first five games and scoring 6.6 goals per game. Garrett Skrbich (8-8-16) and Jared Thomas (7-5-12), the two veteran forwards remaining, have been as good as advertised, while the defensive corps paced by Brian LeBlanc and Jared Kolquist has been stingy. The Hawks again look like the favorites in Section 5A. Section 7A might be a bit more wide open, but until someone knocks off two-time defending champion Virginia/Mt. Iron-Buhl (6-2-0), the Blue Devils also have to be considered the favorites. Garrett Hendrickson (11-10-21) might be the best player in Class 1A.

This should be a very intriguing match-up between two teams looking to gain respect in the state rankings.  Benilde-St. Margaret's (5-0-0) has some great victories already under its belt, beating Hill-Murray (3-1), Minnetonka (3-2) and Duluth Marshall (5-3) in close games.  But it feels like the Red Knights have been overlooked because they typically aren't blowing teams out.  Grant Besse (7-2-9) leads a balanced offense, while Benilde's defense is only allowing 1.4 goals per game.  Maple Grove (5-1-1) has already proven itself in Section 5AA by beating Centennial (4-3) and tying five-time defending champion Blaine (2-2).  But like Benilde, the Crimson aren't winning by big margins.  Ryan Coyne (1.40 GAA, .926 SV%) has played every minute in nets, buoyed by a tough defense.

Can anyone stop the runaway Rochester Lourdes train in Section 1A? The latest to take a crack at the Eagles is Northfield (2-2-0). The Raiders have won two straight games over typically strong programs in Holy Family and Red Wing. But they'll need more balance to compete with Lourdes, as only two players have more than one goal, Michael Vogel (5-1-6) and Andrew Scofield (3-3-6). Lourdes (7-0-0) isn't winning big, but the Eagles are winning and doing so with a balanced scoring attack (seven players with at least two goals, led by Alex Funk's seven) and tight defense (just 1.86 goals per game allowed).

Two of the Central Lakes' contenders meet up when Sartell-St. Stephen heads just down the road to St. Cloud Tech. Sartell (3-2-0) is coming off an important 4-3 overtime victory over Fergus Falls, one of the Sabres' chief rivals in Section 6A. The Sabres are on a two-game winning streak and would like to gain momentum heading into the holidays. A victory over St. Cloud Tech (4-1-0) would certainly do that, but the Tigers are on a roll with four straight victories, including a big 4-1 decision over Section 8AA rival Brainerd. The Tigers have a potent power play at 37.9 percent, with Brandon Reinholz (6-9-15), Mitch Hall (6-7-13), Jobe Peterson (4-8-12), Ryan Heaton (5-6-11) and Jake Peterson (3-2-5) all with at least two power play goals.

Two of northern Minnesota's best -- and most consistent -- programs meet in a pre-holiday classic up in Moorhead. The Spuds (2-1-1) only have scored eight goals in four games (four from Eric Brenk), but with a tough defense and goaltender Michael Bitzer (1.20 GAA, .948 SV%), have managed to hang in while trying to uncover more offense. It might be a tough task against the Greyhounds, though. Duluth East (5-1-0) has won five straight since a season-opening 2-1 overtime loss to top-ranked Wayzata. The Greyhounds have outscored foes 40-4 in that stretch, a dominating factor that looks even better when including the last three victims (White Bear Lake, Centennial and Cloquet).